Mitt Romney's Oath before God: His reasoning for voting to remove Trump from office does not stand up to scrutiny.
American Thinker ^ | 02/07/2020 | Bert Peterson

Nothing reveals the character of the Democratic Party more clearly than the Democrats' vote to convict based on the second article of the impeachment of Pres. Trump — an article that was about legal disputes over subpoenas, which would normally be settled through the courts.

Instead of doing that, however, the issue was sent to the Senate, where, instead of making legal arguments, Democrats simply cried "cover-up!" to Republican opposition to their demands. For this, because Trump adhered to the legal process, Democratic senators voted, and voted unanimously, to remove...not themselves, but President Trump from office. (Were they kidding?)

The other, the first article of impeachment — which charged that, in asking Ukraine to investigate corruption involving former V.P. Joe Biden, and which also charged that Trump withheld military aid to force such compliance — was only superficially less-clearly baseless. This too was unanimously supported by the Democrats, but this time, there was also someone else — Republican Sen. Mitt Romney — who joined them.

To use an old Mormon hymn phrase, that makes reason stare.  The idea that Congress would have to anticipate all of the offensive things a president could possibly do, and then make them a statute? ... What if the president decided to pardon every Republican in prison nationwide, while leaving every Democrat locked up?   There's no law against that!  So it's not a crime or misdemeanor.  But it's obviously absurd.

What is absurd about saying, for non-criminal offenses, we have elections?   What is absurd about arguing — as Trump's attorneys and others in fact argued — that, were there no such a restriction on impeachment, any political party that gained control of Congress while an opposing party member controlled the White House could impeach such a president for anything that — to use Romney's word — its members found offensive."  Under Romney's prescription, the United States would effectively become a parliamentary democracy — something that Trump's defenders argued was clearly against the intention of the founders.  And Romney dismisses such objection as "absurd"?  He owes his constituency, and he owes the founders of this nation, an explanation.

However, it does stand up to sycophancy.

Is he talking about John Smith?

HERE’s ANOTHER ONE OF ROMNEY’s FLAWED REASONING:

Romney describes Trump’s request as an “appalling abuse of public trust,” yet it was made before 25 other government officials, and none commented. He describes it as a “flagrant assault.” And he says “corrupting an election to keep oneself in office is perhaps the most abusive, destructive violation of one’s oath of office I can imagine.”

The first question that last particular statement raises is how exactly any information coming out of an investigation and Ukraine would “corrupt” an American election.

The second question is whether or not Romney is aware of the fact that in the previous administration, the IRS was subverted to impede conservatives from organizing in the run-up to the 2012 election. (Where was the impeachment then?) And is he aware that the FBI was (not openly, but secretly) used to spy on the Trump campaign in the 2016 election? He doesn’t have to imagine these things; they occurred.

Does he not think that these undisputed offenses might “perhaps” (got to have that weasel word) be more abusive, etc. to one’s oath than Trump’s contended offense, even if we assume the worst? And if so, with words like “appalling” and “flagrant” already used to describe Trump’s contended abuse, what words does Romney use for the far more ominous abuses of the Obama administration?

Mitt was a fine Venture Capitalist but a lousy Politician.

An interesting race for president would be Joe Biden and Mitt Romney.

These two are equally bad and it would be like the two worst NFL teams vying for the 1st round draft pick.

RINO Romney is and always has been an opportunist. His track record is as clear as day to those that remember his past exploits. This one is nothing new as he attempts to cover his ass and align himself to another opportunity.

He is absolute trash.

What Romney effectively did here was demonstrate that his moral compass is different than that of all his Republican counterparts in the House and the Senate.

The good news for morally upright people is that I don't believe Mitt Romney even has a moral compass, so his motivations obviously had nothing to do with morality.

The guy is just an asshole -- plain and simple. But we knew that already.

I guess he decided to think himself as wize. He simply divided the baby and gave half to each mother.
I’m so glad I never voted for that clown. He always struck me as a whuss.

10 posted on 02/07/2020 7:53:33 AM PST by PrairieLady2
[ Post Reply | Private Reply | To 1 | View Replies]
To: SeekAndFind
Absolutely nothing about this impeachment and the rest of the slanders, frame jobs, manufactured evidence, lies and false testimony and all the rest if the seditious garbage directed at President Trump stands up to even the most superficial scrutiny.

Not one bit. Its all pure trash and everyone with an IQ above refrigerator temperature is completely aware of this basic and inescapable truth

All the pols and talking heads who are trying to remove the President are lying, knowing full well that they are lying to further a seditious plot to remove a President who they despise and who’s agenda they fundamentally disagree with and oppose with every cell in their body.

Ominously, the agenda they so stridently oppose goes by the acronym MAGA which should be profoundly disturbing to all Americans

Its all pure performance art aimed at using divisive lies and propaganda aimed at preventing President Trump from reversing the Obama era policy of managed decline of the United States and the imposition of a permanent , authoritarian Marxist system of government

“Mitt was a fine Venture Capitalist but a lousy Politician.”

Mitt is a bacteria living in the feces of a worm that lives in whale crap at the bottom of the ocean.

13 posted on 02/07/2020 8:13:34 AM PST by TheTimeOfMan (The Eloi unexpectedly protected the Morlocks from rogue Eloi as they themselves prepared to be eaten)
[ Post Reply | Private Reply | To 12 | View Replies]
To: TheTimeOfMan

Mitt is a bacteria living in the feces of a worm that lives in whale crap at the bottom of the ocean.
—
I think we have a good summing up of Mitt’s character. Thanks for posting that. It’s very clarifying. 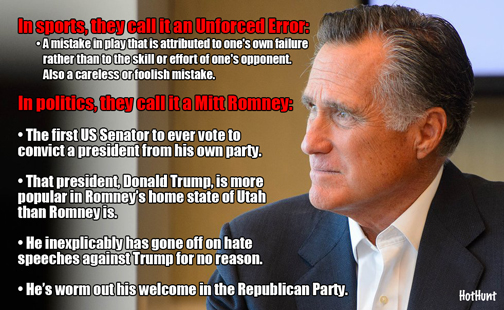 Let us not question Romney’s prayerful, faith based reasoning.

It starts with him stepping into the political winds generated by the liberals who Romney sees as being the cool kids and whose approval he craves. He then prayerfully and with faith in God licks his finger, sticks it in the political winds. Then, he asks God that the direction his finger has told him the wind is blowing in will be the right one.

After that, he prayerfully and with faith announces his course of action. And if he still isn’t sure, he makes sure to let everyone know that he has lost sleep while consulting with God.

And let me say this, we can trust Mitt because no scoundrel, no person with ill intent has EVER in history invoked the name of God.

I am sure it is this faith and prayerfulness that bore us Romneycare. I am sure.

Again, I say Amen and blessed be Saint Romney of Utah.

I'm not questioning Romney's motivation, I'm questioning his judgment. He would have us believe...

Pelosi, Nadler, Schiff, Schumer, et al had the purest of motives...and Trump was involved in a political vendetta.

If he seriously thinks that, he's not only unfit for the Senate, he shouldn't be out without a leash.

18 posted on 02/07/2020 8:27:50 AM PST by gogeo (The left prides themselves on being tolerant, but they can't even be civil.)
[ Post Reply | Private Reply | To 1 | View Replies]
To: ImJustAnotherOkie
Mitt was a fine Venture VULTURE Capitalist but a lousy Politician.

Every man mixes a bit of the personal into his business. Wise men keep it in check.