A former commander of the U.S. Navy base at Guantanamo Bay was convicted Friday of interfering with an investigation into the death of a civilian with whom the commander had fought and argued over his affair with the man's wife.

Nettleton was removed from command shortly after civilian Christopher Tur was found floating in the waters off the base on the southeastern coast of Cuba in January 2015. Nettleton had commanded the base since June 2012, but not the detention center where suspected terrorists are held.

Nettleton wasn't charged with Tur's death. He could get 75 years, but sentencing guidelines suggest his term will be significantly less.

“Nettleton dishonored his oath and impeded the investigation into a civilian’s tragic death, preventing much needed closure for the family and friends of the deceased,” Assistant Attorney General Brian Benczkowski said after the verdict, according to The Florida Times-Union. “Today’s verdict demonstrates the department’s steadfast commitment to holding accountable those who abuse their positions of public trust and obstruct justice.”

WTF?
Nothing to do with anything official LOL!

Strange, though, I admit.

“You can’t handle the truth!” 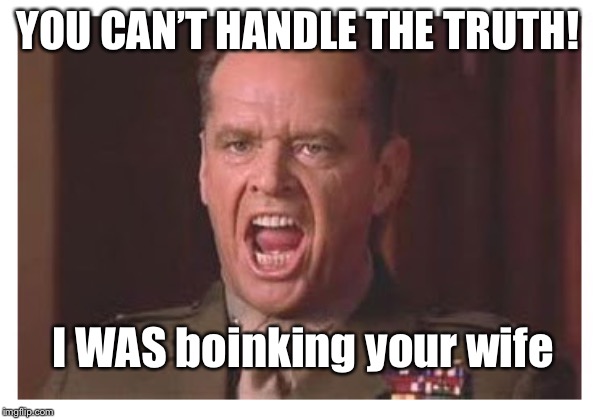 5 posted on 01/18/2020 10:20:02 PM PST by ProtectOurFreedom
[ Post Reply | Private Reply | To 1 | View Replies]
To: Rebelbase
A former commander of the U.S. Navy base at Guantanamo Bay was convicted Friday of interfering with an investigation into the death of a civilian with whom the commander had fought and argued over his affair with the man's wife.

My opinion of the officer corp of the U.S. armed forces has diminished over the last ten years.

This one was allegedly a love triangle, but there are some other unsolved ones.

Every time a man thinks with the head of his d*** all it does is get him into trouble.

He was just lying about sex. Everyone lies about sex. There is nothing wrong about that.

HA!
First thing I thought of too!
You beat me too it!

10 posted on 01/19/2020 5:35:45 AM PST by mkleesma (`Call to me, and I will answer you and tell you great and unsearchable things you do not know.')
[ Post Reply | Private Reply | To 2 | View Replies]
To: Rebelbase
Why, Oh why am I so confused?
I get into situations where I always lose
One thing is overtly plain
I get into trouble when I think with my other brain

The Other Brain by Vetvetdoug