If this stat is accurate -- and I have no reason to doubt it -- President Trump has far more cross-party appeal than the Media Cartel would have us believe. Oh, and, if true, he's clearly the odds on favorite to win the 2020 election... in an electoral college landslide.

Earlier this week, Trump’s campaign manager Brad Parscale shared some statistics from Trump's campaign rally in Wisconsin on Tuesday. They are absolutely staggering. According to Pascale, 57.9% of the 20,395 voters in attendance were either registered Democrats or Independents.

The results from a poll in Ohio were already impressive, with 43% of those present being Democrat/Independent, but the numbers out of Wisconsin are truly mindblowing.

As RedState's Elizabeth Vaugh writes, "as a conservative, I am overjoyed at these numbers. I take them to mean that this group is looking for an alternative to the current field of candidates running for the Democratic presidential nomination."

She has every right to come to that conclusion, especially considering the fact that campaign events by Democratic presidential candidates are largely ignored by voters. For example, when Mike Bloomberg did an event with Judge Judy, only 45 people reportedly showed up.

And when John Kerry did a stop in Clinton, Ohio for his "We Know Joe" tour, he was joined by a pathetic 11 attendees. 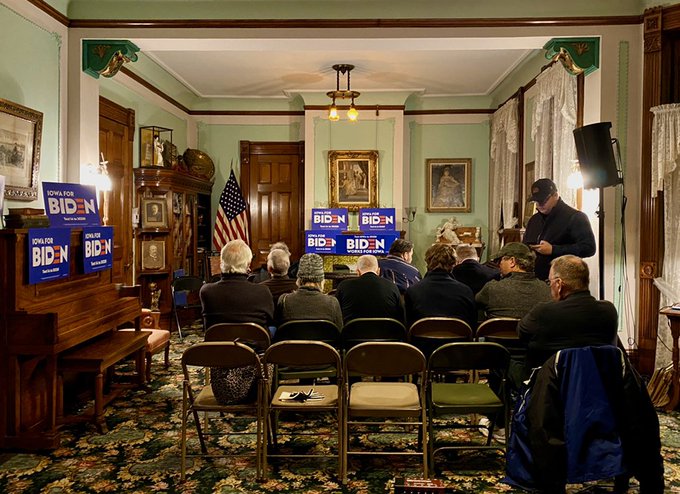 Can you imagine the look on John Kerry’s face when he saw the facility and the attendance?

It would even be funnier if he spoke like there were 10K in attendance and had a teleprompter.

Well dang, at least they had plans for at least 4 more.

There are Democrats who are still sane who are seeing what has happened to their party and have left. That is the main reason why Dems need Trump removed so badly, they cant beat them, they have the polling and they know its bad for them, very bad

Maybe the America first nationalist agenda, tariffs and that sort of thing doesn’t appeal to Republicans.

Just to twist the knife a tiny bit

The Lord YESHUA has his back.

RE: Make America Greater And Greater

What was the split Ind-Dem? Without that, this is useless.

Our side needs to think about post Trump as in 2024. I have a sick feeling that the GOP will just give it away and the DNC will go full throttle.

Only 48 people showed up? Mikey, your next event should be given attendees money...it will be less costly than your ads...

I think changing his campaign slogan was a rookie marketing error. "Make America Great Again" was brilliant, memorable, and encapsulated the entire focus of the movement to correct our nation's disastrous course.

"Keep America Great" is an unwieldy acronym that is too awkward to speak aloud.

It's also just a tad cocky, in that it implies that Trump has already brought the nation back to greatness. Nothing could be further from the truth. We've still got a long way to go before we (or he) can make that claim.

He should have stuck with "MAGA". It was a winning slogan, and there was no need to change it.

In the 2016 campaign, Hillary showed up at some arena that was a 5,000 seat facility. It had the capability to draw several curtains, and it was oblivious as you looked at the people in the place...there were no more than 700 in attendance. I think if you simply went to these images...you could measure enthusiasm, and gauge voting potential for November.

What worries the Democrats is that they look at Trump’s crowds that show up, and he always draws a minimum of 10,000 people, and most of these are 20,000. There was some showing back in 2016 for Trump in Alabama, and some folks drove three to four hours, just to get a chance to see Trump in action.

19 posted on 01/18/2020 9:08:12 PM PST by bitt (A FRIVOLOUS impeachment vote is a SEDITIOUS CONSPIRACY)
[ Post Reply | Private Reply | To 9 | View Replies]
To: central_va
Maybe the America first nationalist agenda, tariffs and that sort of thing doesn’t appeal to Republicans.

LOLOL...yeah, that's GOT to be it. Chortle. Nice play there, CVA.