Iran threatens European troops for 1st time as it admits it "lied" about jet
CBS "News" ^ | January 15, 2020 | by Associated Press

Tehran, Iran — Iran's president warned Wednesday that European soldiers in the Mideast "could be in danger" after three nations challenged Tehran over breaking the limits of its nuclear deal. Tehran's top diplomat meanwhile acknowledged that Iranians "were lied to" for days following the Islamic Republic's accidental shootdown of a Ukrainian jetliner that killed 176 people.

President Hassan Rouhani's remarks in a televised Cabinet meeting represent the first direct threat he's made to Europe as tensions remain high between Tehran and Washington.

Iranian Foreign Minister Mohammad Javad Zarif's admission that the Islamic Republic lied to its own people, meanwhile, came at a summit in New Delhi on Wednesday. It was the first time an Iranian official referred to earlier claims from Tehran that a technical malfunction downed the Ukraine International Airlines flight as a lie. The shootdown — and subsequent days of denials that a missile had downed it — sparked days of angry protests in the country. 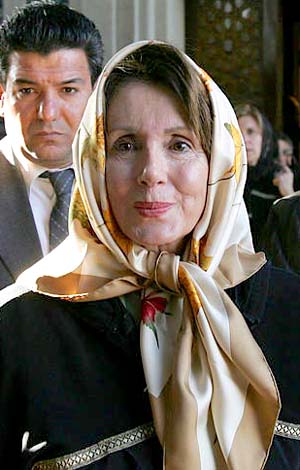 A face only Howdy Doody could love.

I hear now that the 2nd video (though you could tell from the 1st that 2 missiles were fired, at least I could) has been releases the iranian mullahs are now saying against the US took down that airliner.

Is Iran hoping the Euroweenies will turn the Sudetenland over to them?

Yes, with justification. Appeasement is built into the bones of the European elite.

Sudetenland, or whatever...A land far away, of which we know nothing...Peace in our time.

Was it a German or French company that sold Iran the centrifuges to enrich Uranium?

The troops will be a lot safer if they don’t try flying commercial out of Tehran.

So EU elites are banking the child molesting cult members controlling the Persian people through tyranny ? My, how Euro of them.

Was the shooting down of a plane leaving Tehran the capital of Iran filled with people leaving it, ordered ? It would appear many Iranians feel that it was, and no accident.
According to the Koran Moslem clergy have and do authorize followers to execute anyone in their unholy war against those who believe in free will and refuse to become moslem or violates its precepts which includes those fleeing areas they control .

The headlines on the different versions of these stories would make you think Iran is doing something “tonight!”

If you actually read what he said, it sounds like your everyday, normal, screed for a Friday afternoon. It actually sounded tame compared to a month ago. Tame for them....

It is clear from multiple videos that the airliner was hit by two missiles. When they weren't sure that the first had taken it down, they fired a second missile -- 30 seconds later -- to make sure they finished the job.

At least one of the videos had sound, including startled dogs barking at the flash of the explosion -- plus the sharp crack and rumble of the high-VOD detonation -- that set off nearby car alarms (~10 seconds after the flash).

How much more deliberate could they be?

Iran's president warned Wednesday that European soldiers in the Mideast "could be in danger" after three nations challenged Tehran over breaking the limits of its nuclear deal.

Yeah, and President Trump can't do a damned thing about it. /snicker