In Damascus, an ISIL siege is stymied by a 43-day sandstorm of biblical proportions that was foreseen by a single man. For accurately predicting—and preaching throughout—the cataclysm, this figure comes to be known and revered as al-Masih (Mehdi Dehbi), aka “The Messiah.” Having commanded the ear of the poor and downtrodden, al-Masih leads his new Palestinian followers across the desert to the Israeli border, thereby instigating an international incident about which he seems blissfully unconcerned. “Throw away your assumptions about God. Stop clinging to what you think you know. In this hour, mankind is a rudderless boat.
Cling to me,” he intones with the calmness and conviction of a prophet and the long hair, chiseled cheekbones and well-trimmed beard of a male model.
And cling to him they most certainly—and crazily—do.
Messiah, a new 10-part Netflix series premiering on Jan. 1, is the story of al-Masih’s effect on the world, both abroad and here at home. That’s because, after a stint in an Israeli jail where intelligence officer Aviram (Tomer Sisley) is shaken by his captive’s insight into his own life, al-Masih suddenly materializes in the tiny enclave of Dilly, Texas, and, in particular, at the church of Felix (John Ortiz). Thanks to crushing debts, Felix is on the brink of burning his house of worship to the ground. Before that can happen, however, a tornado rolls into town, and so does al-Masih, who’s seen standing before it as if protecting the church from destruction. When it turns out that the stranger has also saved the life of Felix and boozy wife Anna’s (Melinda Page Hamilton) runaway daughter Rebecca (Stefania LaVie Owen), the global narrative is set: al-Masih is God’s chosen vessel.
Created by Michael Petroni, executive produced by The Apprentice’s Mark Burnett, and often directed, boringly, by V for Vendetta helmer James McTeigue, Messiah generates suspense from ambiguity: namely, the question of whether or not al-Masih is, in fact, the second coming of Christ. That’s certainly the issue which consumes CIA agent Eva Geller (Michelle Monaghan), who, when not enjoying mysterious trips to the hospital—and giving herself equally puzzling shots that appear to cause her hair to fall out—zealously looks into this enigmatic individual. Those in search of answers and salvation—such as mother Staci (Emily Kinney), who brings her cancer-stricken daughter to see al-Masih against the wishes of her husband—flock to him in Texas. No one, however, believes in him as strongly as Felix, who embraces al-Masih like a drowning man clutching a piece of driftwood.

Al-Masih is greeted by both celebration and hostility, and Messiah makes a point of structuring itself so that everyone, and everything that takes place, is mirrored elsewhere. Eva, tormented by medical problems, her past, and her dementia-addled father Zelman (Philip Baker Hall), is echoed by Aviram, who spars with his ex while trying to maintain a relationship with his daughter, and who’s tortured by a dark secret. In the U.S., epilepsy-afflicted Rebecca becomes a fervent disciple, just as young Jibril (Sayyid El Alami) did in the Syrian desert. Natural disasters swirl about al-Masih on separate continents, and he leads respective congregations—Pied Piper-style—through two different deserts. Felix has an Arab counterpart who preaches al-Masih’s divinity, and the man’s movement faces pushback from various establishments, be they U.S. and Israeli governments (which are depicted as venomous, if not outright murderous) or orthodox Muslims who view al-Masih as a false prophet.
Such parallels lend Messiah cohesiveness, but they don’t speak to the show’s larger themes because, well, there really aren’t any. Humanity’s desire to believe in something bigger than itself, and the competing impulse to view miracles with skepticism, are certainly catalysts for the narrative. Yet despite what he claims, al-Masih—embodied by Dehbi as an alternately cheery and intense cipher whose motives are impossible to read—isn’t so much a vehicle designed to reflect people’s hopes, fears and dreams, as much as an agent of chaos. Discord invariably follows in his wake, especially in the cases of Eva and Aviram, whose personal and professional troubles are magnified by al-Masih’s conduct: magically escaping jail cells; talking about things he shouldn’t know about; and performing other feats previously only pulled off by Jesus.
If there’s a realistic element to Messiah, it’s the notion that the arrival of a convincing prophet would send many people—of all religions and nationalities—into a tailspin of excitement, doubt, panic and insanity. A sequence in which a student walks through a college campus that’s become a carnival of hippies, preachers, doomsayers and beer-bonging slackers is perhaps its most accurate speculative moment. Unfortunately, its character-based dramas, rife with guilt, shame, and moral confusion, barely speak to the potentially world-transforming al-Masih, or people’s attraction to faith; rather, they’re just standard predicaments mainly designed to eat up time when the show isn’t fixating its gaze on its would-be messiah’s placid countenance and cryptic, oblique pronouncements.
In the end, Messiah hinges on whether al-Masih is the real deal, and yet Petroni’s plotting makes clear early on that it’s not going to provide a definitive answer. As when Al-Masih resurrects a shot boy, but we never actually see a gun fire, the action always leaves open the possibility that both interpretations—he is God’s man; he’s a charlatan—are true. A bevy of revelations about al-Masih’s background eventually come to light, but they’re similarly hard to trust; worse, they’re not particularly exciting, which also goes for the bombshells dropped about Eva, Aviram and Rebecca, all of them brought to life with earnestness but not much idiosyncratic liveliness by Monaghan, Sisley and Owen. At least they’re fully developed, though—from an Islamic terrorist who recruits Jibril’s friend Samir (Fares Landoulsi), to a political scientist major (and waiter) whom Eva looks out for, many threads are simply left to dangle, which consequently renders them corny plot devices.
By the time the president of the United States (Dermot Mulroney) starts falling under al-Masih’s spell, Messiah has long since overstayed its welcome, dragging out its central question about the would-be savior’s true nature past the breaking point. It’s one thing to stoke audiences’ imagination and anxiety with uncertainty, but do it for too long, and to no conclusive end, and what you’re left with is characters, situations and conundrums that are increasingly impossible to care about—especially when the show has nothing enlightening to say about them.

TOPICS: Culture/Society; Miscellaneous; News/Current Events
KEYWORDS: messiah; netflix; trash Navigation: use the links below to view more comments.
first 1-20, 21-31 next last
I just watched the first two episodes. Seems like very brave film-making to me. The messiah character is ruffling everyon'es feathers including Islam. On the other hand, it kind of reminds me of the old TV show "Kung Fu" - not that there is anything wrong with that. The writer of this review doesn't like it because...Trump. Anyone else see any of this yet? It is a 10 episode series just released on Netflix.
1 posted on 01/01/2020 8:40:23 PM PST by bagadonutz
[ Post Reply | Private Reply | View Replies]
To: bagadonutz

Read that. Albeit quickly. Didnt see any reference to Trump.

There is a Messiah figure to come before Christ, and the number of his name is 666.

I’m in my cups, but that headline makes no sense!

Only watched 2 episodes so far, but he seems to be the 12th Imam / Mahdi.

I would not pollute my brain , watching this crap , if you paid me to.

Utter drivel. Par for the course when it comes to Netflix.

No mention of President Trump unless one assumes the reference to the President of the United States is our current president.

No chance this president would fall for the nonsense this character spouts. Not a snowballs chance in hell. 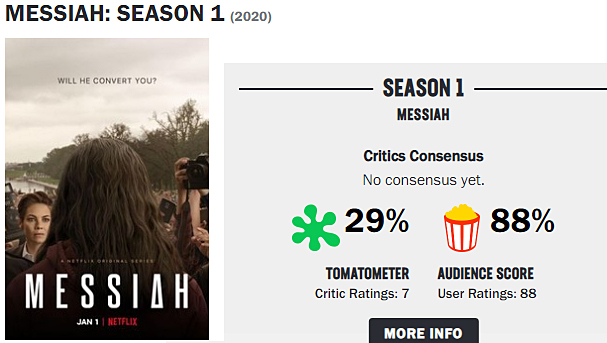 Reminds me of the Bruce Willis remake of Death Wish, which generated an 18%/77% critical chasm.

Paragraphs are our friends.

12 posted on 01/01/2020 9:30:57 PM PST by miserare ( Indict Hillary!)
[ Post Reply | Private Reply | To 1 | View Replies]
To: bagadonutz
Your first mistake was subscribing to Nutflix, and thereby contributing to Odungo's salary. The minute I heard he was one of their new stars, I cancelled with them. The young man on the other end of the phone told me a LOT of people cancelled when that announcement came out.

BTW, that series sounds like a bunch of PC hogwash.

Some vague reference to Dune? BoD

[There is a Messiah figure to come before Christ, and the number of his name is 666.]

Correct - though I would alter your statement slightly

“There is a anti-Messiah figure to come before Christ, and the number of his name is 666.”

Many will come claiming to be the Messiah. Look up!

Correct. This is just more incredible propaganda by the Satanic Globalists to "prepare ye the way for the Antichrist."

Obama is on the board of Netflix, which is one of the biggest money laundering scams in the world. What could go wrong?

My wife watched "The Two Popes" on Netflix, and said it was more complete garbage. 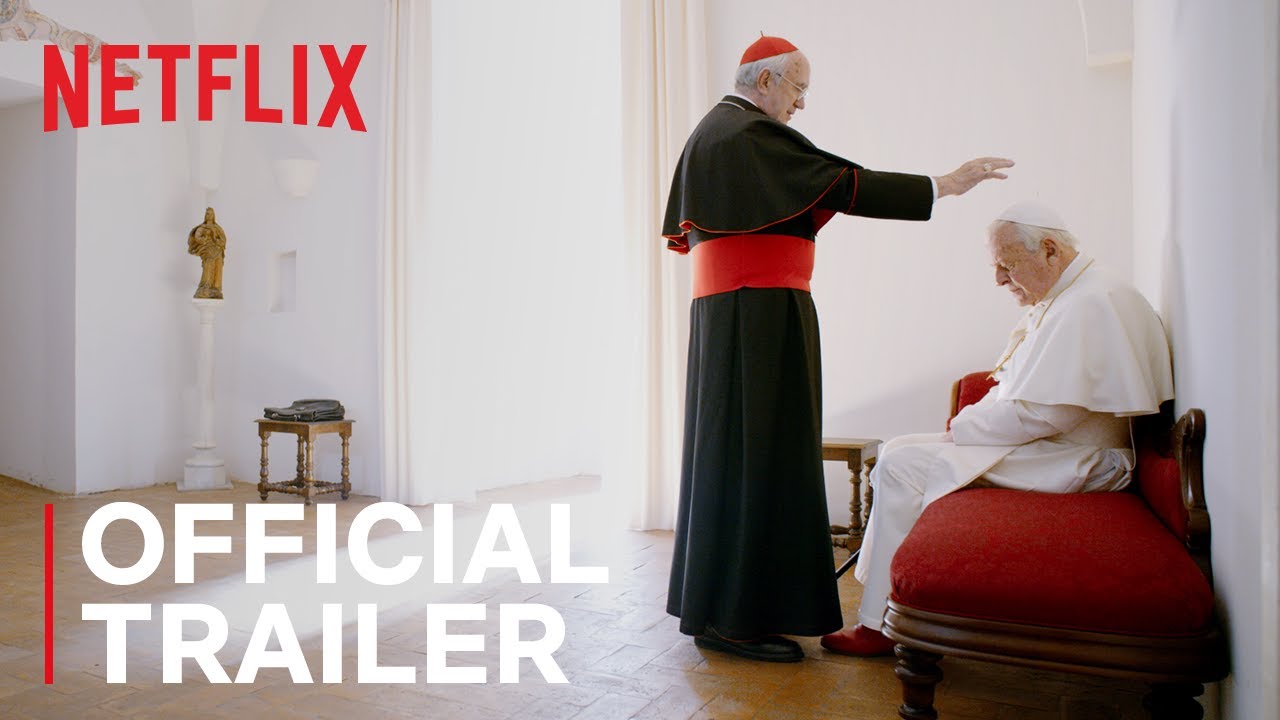 She said it was simply an attempt to humanize and endear Francis.

In the movie, the two men help each other to "forge" ahead. It depicts a Vatican Bromance. Right. The truth is, Obama, Soros, and the globalist cabal initiated a treacherous coup in the Vatican and blackmailed Benedict (according to multiple reports in the Italian press).

Not sure it’s fair, but the first thing that came to mind was “Randall Flagg” in Stephen King’s “The Stand”.

I probably shouldn’t jump to conclusions.

Very grateful we pulled the plug on the TV right before Zero was elected. If I want to be entertained I choose books or even watching dog show competitions. (at least in those the call a Bitch a Bitch).

Recently I changed my alarm clock to wake me by a radio station. Frightening to hear the lyrics in the ‘new’ Country songs. Pure programming and not for a higher purpose, either.