But if you ask a leftist what one or two books you should read to understand leftism, every leftist will give you a different answer -- or need some time to think it over. Few, if any, will suggest Marx's "Das Kapital" because almost no leftists have read it and because you will either not finish the book or reject it as incoherent.

So, then, how is one to understand what leftism stands for?

The truth is it is almost impossible. What leftist in history would have ever imagined that to be a leftist, one would have to believe that men give birth or men have periods, or that it is fair to women to have to compete in sports with biological males who identify as females?

"Music" without tonality, melody or harmony.

As regards emotion and meaning, the Guardian reports, this is what Thunberg's father just told the BBC: "Greta Thunberg's father has opened up about how activism helped his daughter out of depression ... how activism had changed the outlook of the teenager, who suffered from depression for 'three or four years' before she began her school strike protest outside the Swedish parliament. She was now 'very happy', he said ... 'She stopped talking ... she stopped going to school,' he said of her illness."

The fact is life is better, safer and more affluent, and offers more opportunities for more people, than ever before in history. Just about all emotionally stable, mature people should be walking around the West almost delirious at their good fortune. Americans in particular should feel this way. But leftists (again, as opposed to many liberals) are not usually emotionally stable and are certainly not mature. That is why depression among young Americans (and perhaps Swedes) is at the highest levels ever recorded. So, like Greta, they look to left-wing causes to find meaning and emotional fulfillment. Until she embraced climate crisis activism -- a chance, as she sees it, to literally save the world -- Greta Thunberg was so depressed "she stopped talking." But thanks to climate activism and other left-wing activism, she is now "very happy" (an assessment I suspect many observers find hard to believe).

Feminism and "fighting patriarchy" (in an age when American women have more opportunities than ever before and more opportunities than women almost anywhere else in the world), fighting racism (in the least racist multiracial society in history), fighting white supremacy (which has almost disappeared from American life) and fighting on behalf of myriad other leftist causes -- in other words, fundamentally transforming society -- gives meaning to people with no meaning.

None of that is morally or rationally coherent. But it is very emotionally satisfying. Just ask Greta Thunberg's dad.

The left uses chaos to disrupt a unified, patriotic nation so it can culminate into a violent overthrow of the existing system. The resulting turmoil leads the people to crave “order” and the socialists stand ready to deliver it by wiping away the old system that caused the current chaos with a new system promising utopia.

Of course, once the socialists have control, all the support for freedoms and various groups ends and those in charge decide what is allowed and what is not and they may never be questioned.

Excellent takedown of the Left by Dennis Prager, a true Patriot.

David Horowitz who came from the left said the issue is never the issue it is always about the revolution. In other words all the issues relate to taking power and ultimately absolute power which relates to the totalitarian core of leftism. Those of us on the right in politics are also interested in power but often it is to prevent the nightmares the left would inflict on us. Actually improving society is another reason but that is often beyond politics from the perspective of the right. Just get government out of the way.

The left will stop at nothing, do anything to further their mentally ill agenda including child exploitation. Her two nutty parents are child abusers. The manipulation of a child’s mind at a young age makes for a very unstable deranged young adult. They should all be held accountable for her mental illness

Does anyone understand just what the climate alarmists want? I still do not know. They protest and shriek all the time but what exactly do they want? Do they want cars, planes, trucks, trains, ships, banned?

Excellent article by Dennis Prager, thanks for posting it.

In THEIR system, there is only one pie, it is getting smaller, and they want to keep as much of it as possible for themselves while cutting out people they view as "useless eaters" who only consume, waste, and destroy their pie.

11 posted on 12/31/2019 4:20:13 AM PST by rlmorel (Finding middle ground with tyranny or evil makes you either a tyrant or evil. Often both.)
[ Post Reply | Private Reply | To 8 | View Replies]
To: Kaslin
Thunberg is possessed by a demon. Thats why she was depressed, the demon was denied the ability to do evil by societal conventionaism and the rigors of conformity to decentcy. Once she was allowed and encouraged to rage against decency and let the hate flow , the demon was "all better"and so was she..

Good! Your hate has made you powerful. Now, fulfill your destiny and take your father's place at my side! - Emperor Palpatine- return of the jedi.

It all started out when an attractive Australian man and Australian woman met in Greece. He (Riley) was a 30 year old offshore oil rig worker who saved some money and bought a 37' sailing yacht. She (Elena) was a young 19 year old club singer and guitar player.

They fell in love, and began sailing the world. They didn't have much money, and he had to go back to the oil rigs at one point. She started making YouTube videos, which were seen by only a few thousand people.

Fast forward 5 years, and they now have 1.2 million subscribers, a host of paying patrons, sponsorships, clothing lines, product lines, merchandising lines, online books, T-shits, and a 1 million dollar French built Outremer catamaran yacht. They also have a 1 year old son (but they never married, and are still boyfriend and girlfriend).

The videos were very entertaining, but you could tell they are but a shadow of the original concept. Their prime motivation these days seems to be more viewers, more patrons, and more money. I don't know what they actually make per year, but it is estimated to be a LOT of money.

They have no religious faith, and are into the typical millennial garbage of weird foods, essential oils, and "saving the planet." But they were competent sailors and seem like genuinely nice people.

In November, in an act of completely bad judgement, they decided to hook themselves to the Greta train. Greta could not "fly" from the U.S. back to Europe to join some Climate Change wacko conference in Spain. Flying is EVIL! So her PR team went looking, and hooked up with Riley and Elena. They sailed her back to Europe (with the help of a very experienced sailor who was flown to the U.S. to help!) Irony! 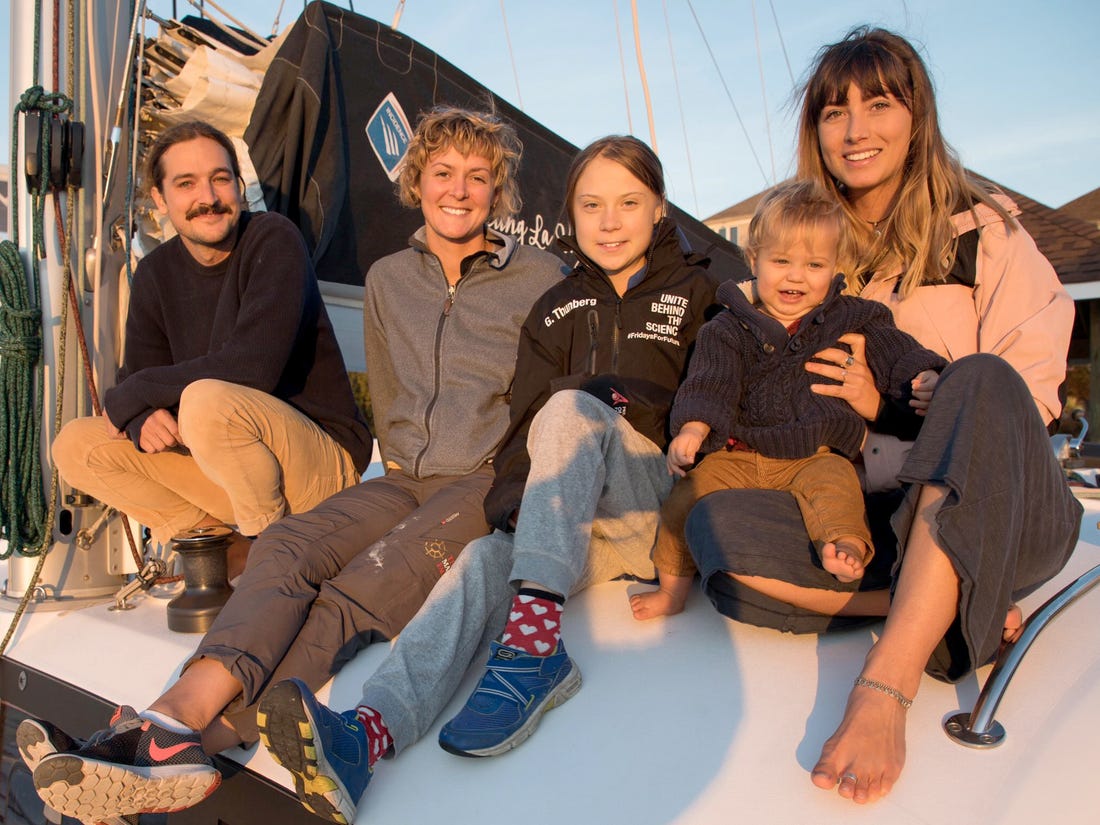 After this incident, I have lost interest in them. The Left ruins everything.

Pffft. Leftists are happy to kill full-term babies and see little boys pumped full of hormones and mutilated into being "girls." Any psychological abuse of one autistic Swedish teenager in support of The Cause is hardly a concern to them.

Originally, leftism was coherent. Das Kapital claimed that communism would make the workers’ lives much better in a material way. The theoretical reasons why communism achieves that are totally false and make no sense. But the typical leftist believed that was what they were trying to bring about. It may actually be more accurate to say leftism is opposed to materially improving the workers’ lives today.

Since socialism spectacularly fails to achieve its original objectives where ever it’s tried, the leftists have to redefine leftism to be about something else, which seems to be dismantling things, as Prager notes.

“Does anyone understand just what the climate alarmists want?”

A return to people living in caves. Sorry no fires allowed.

In simple terms, this wealth-redistribution....you convince some idiots that they are guilty of something and via taxes or fees...they will pay into some pot which is shifted over to some third-world ‘Abu-character’ who will use his portion to buy a gas-generator, a diesel truck, and forty head of cattle.

Go look up 1500s gimmick of the Catholic Church...the letters of indulgence, that you could buy and relieve yourself of guilt. It’s same basic pattern.

Leftism is a revolt against modernity - they dream of a utopia where everyone lives in a collective farm run by secular priests and the Party. Where people are tortured and executed if they deviate from the Party’s orthodoxy. A childish world where things become true just because the Party leaders demand it. They want a few trappings of modernity where it helps the sexual revolution - hospitals that are efficient at performing abortions or sex change operations (for “free”) but can do little else. A fast Internet that delivers Party propaganda or pornography but censors everything else. But for the most part people are serfs with a ruling caste to control them.

Leftism is about the oldest battle on the planet, Exploiting the have nots against the haves, to achieve power.