But, what if the Senate wants to see the House's Articles of Impeachment before writing the Senate's procedures and rules that Nancy so desperately wants to see?

Nancy is therefore guilty of "Obstruction of Senate" which is a crime I just made up out of whole cloth just like the 2nd Article of Impeachment.

The Trump Curse will descend on the guilty ones!

3 posted on 12/19/2019 12:06:32 PM PST by Grampa Dave (A FRIVOLOUS IMPEACHMENT VOTE is a SERIOUS SEDITIOUS CONSPIRACY!!!)
[ Post Reply | Private Reply | To 1 | View Replies]
To: billorites
My favorite is 3). Any time the Senate spends on this impeachment is less time they have for confirming Trump's judicial appointments. So by not sending over these articles of impeachment, Pelosi is basically handing Trump more judicial confirmations.

Not sure I want McConnell to blow the whistle on that little scam. I'll just take my extra judicial confirmations, thank you.

Democrat voters, generally speaking, are stupid, and have no civics education, (this includes many in the media). Therefore, they cheer Pelosi doing anything and everything to try to rid them of orange man bad.

Fact is until they pass them out of the House, the articles are not effective. So Trump has not been impeached yet.

I would bet that if the aged RBG suddenly dropped
dead, these articles would be hand delivered to the Senate
post haste.

From another post I made. A Lawfare blog response to what McConnell can do.

The Constitution does not by its express terms direct the Senate to try an impeachment. In fact, it confers on the Senate “the sole power to try,” which is a conferral of exclusive constitutional authority and not a procedural command. The Constitution couches the power to impeach in the same terms: it is the House’s “sole power.” The House may choose to impeach or not, and one can imagine an argument that the Senate is just as free, in the exercise of its own “sole power,” to decline to try any impeachment that the House elects to vote.

The current rules governing Senate practice and procedure do not pose an insurmountable problem for this maneuver. Senate leadership can seek to have the rules “reinterpreted” at any time by the device of seeking a ruling of the chair on the question, and avoiding a formal revision of the rule that would require supermajority approval. The question presented in some form would be whether, under the relevant rules, the Senate is required to hold an impeachment “trial” fully consistent with current rules—or even any trial at all. A chair’s ruling in the affirmative would be subject to being overturned by a majority, not two-thirds, vote.

The Senate has options for scuttling the impeachment process beyond a simple refusal to heed the House vote. The Constitution does not specify what constitutes a “trial,” and in a 1993 case involving a judicial impeachment, the Supreme Court affirmed that the Senate’s “sole power” to “try” means that it is not subject to any limitations on how it could conduct a proceeding. Senate leadership could engineer an early motion to dismiss and effectively moot the current rule’s call for the president or counsel to appear before the Senate. The rules in place provide at any rate only that “the Senate shall have power to compel the attendance of witnesses”: they do not require that any other than the president be called. Moreover, the Senate could adjourn at any time, terminating the proceedings and declining to take up the House articles. This is what happened in the trial of Andrew Johnson, in which the Senate voted on three articles and then adjourned without holding votes on the remaining eight.

** McConnell can Dismiss the house impeachment articles anytime. He has more cards then Pelosi.

Voting TO impeach. Not impeached already! 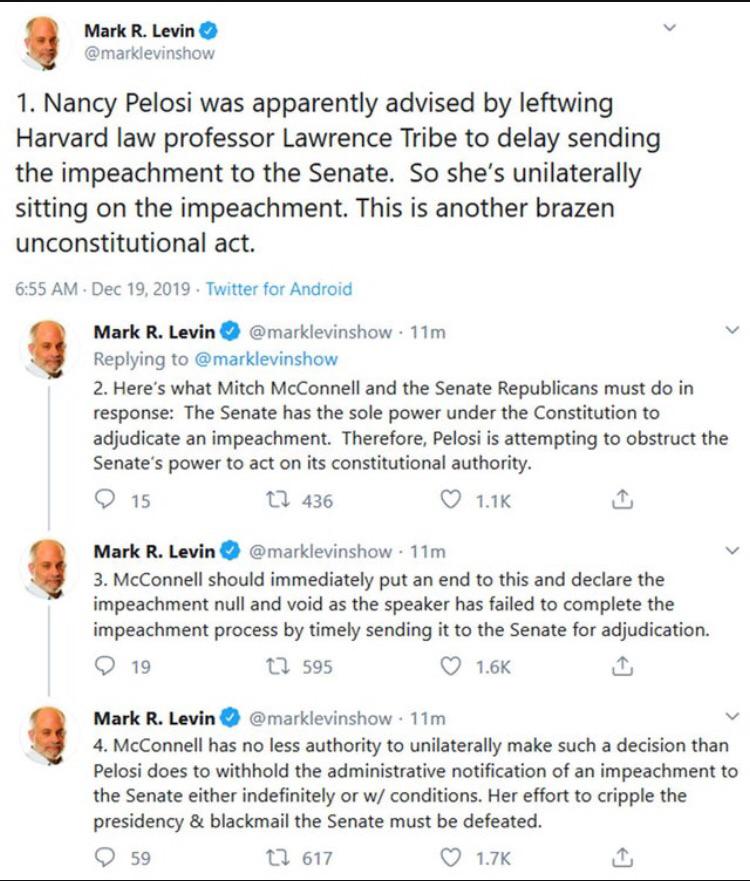 I hope and pray, McConnell doesn’t flinch on this. I think Trump would tell him do not negotiate, and do not give in to her.

Somewhat unrelated, but I’ve adopted the above phrase to ridicule brainless and bigmouth Trump haters.

Previously I’d made the mistake of trying to engage them on the facts, to no avail.

Now when I hear a public criticism of Trump I just say “Orange man baaaad” in a mocking tone.

I’m yet to get any response other the speechless embarrassment. The left isn’t used to us speaking up.

17 posted on 12/19/2019 12:59:42 PM PST by ConservativeWarrior (Fall down 7 times, stand up 8. - Japanese proverb)
[ Post Reply | Private Reply | To 5 | View Replies]
To: kaehurowing
I'm not so sure this type of misinformation isn't simply some kind of trolling effort to discredit FR and paint it as the bastion of the ignorant. However, I will take a chance and try to explain the labels & process for you and other interested readers.

The House impeachment process is nothing more than a grand jury. A grand jury, after listening to evidence presented on whether there is sufficient information in which to proceed, then votes to either indict or acquit. If the GJ reaches a decision to indict, then it issues its opinion and its function is over. IOW, they can go home and forget all about it; they won't be called as witnesses, and they cannot be seated as jurors in a regular trial (if it proceeds).

So no that an indictment has been issued, the prosecutor has two choices: file a motion before the criminal court in which to proceed, presumably to a trail, but in the vast majority of cases, some kind of plea bargain. Or, for whatever reason the prosecutor can elect NOT to bring the GD decision before the court. This would be extremely rare, because why would the prosecutor bother to convene a GJ in the first place if not to pursue justice? In actuality, in this type of situation, a credible defense could be asserted that the prosecutor himself was corrupt by using state resources for personal gain (typically during an election for the office of DA).

So, that's where we are with the House holding up the indictment aka impeachment. However, unlike a court system which has a massive backlog of thousands upon thousands of cases, scheduling, etc, and can deal with all kinds of delays, the constitution stipulates that the Senate (the court in this impeachment instance) would have to drop all business to attend to the matter. That's the hang-up; not a label or whatever else suits someone's fancy.

Let it be noted that Trump was the first politically impeached president in this country's 230 year history. The House has destroyed a legacy of measure, temperate and thoughtful process of dealing with important national electoral issues in an entirely partisan, rushed and emotional manner. There's no shame to being a victim of this witch hunt; rather it should be worn as a badge of honor, a medal Trump earned fighting the enemies of the republic.

We are seeing sedition writ large upon the Republic. Time for arrests and trials, then prison for the rest of their miserable demon rat lives. The treasonous one like Vindman, Yavonovich, Taylor, Brennan, McCave, Comey, Ciarmella, well they need trials and hangman’s noose.