I’ve been a prosecutor. I know what prosecutable crimes look like. And I can tell you Donald Trump didn’t commit one. There are no grounds for impeaching the president. What’s the point of the elaborate process now going in Congress? To get anything the Democrats can get. They want to defeat the man they couldn’t defeat in a fair election.

As Representative Tom Cole of Oklahoma, the top Republican on the Rules Committee, said, the process is geared to “a preordained result.” It’s not about the law. It’s about using the law to get a political enemy.

House Democrats are conducting the impeachment proceedings behind closed doors, only allowing members of the three committees involved to attend. Why would they do that? Are they discussing national secrets? No. They’re doing it to avoid public scrutiny. Closed doors decrease the chance the public will call out their unfair tactics.

Democrats are refusing to let witnesses favorable to Trump testify in the closed door hearings. Nor are they letting Trump’s legal team cross-examine witnesses. House Intelligence Committee Chairman Adam Schiff (D-Calif.), who leads the impeachment inquiry, is halting lines of questioning he doesn’t like from GOP representatives who are part of the hearing. This is unfair because the whole picture isn’t being portrayed. Trump deserves due process and a fair, impartial proceeding. At the very least, he is due the same somber, bipartisan treatment and procedures afforded Richard Nixon and Bill Clinton.

The Democrats in the House will eventually start public hearings. They passed an impeachment inquiry resolution on Thursday to authorize them. But it doesn’t ensure minority subpoena power or the release of transcripts. It doesn’t equally allocate staffing between parties. It doesn’t allow Trump’s lawyers to be present to question witnesses and present evidence. Again, due process isn’t part of this process.

The impeachment effort was hurriedly launched because someone claimed that Trump had engaged in a quid pro quo with Ukrainian president Volodymyr Zelenskyy. The anonymous “whistleblower” made his charges to Schiff.

The informant claimed that Trump threatened in a phone call to withhold aid from Ukraine in exchange for a political favor. Trump allegedly wanted Zelenskyy to find out why the prosecution was dropped against Joe Biden’s son’s business dealings.

Then Trump unexpectedly released the transcript of the call. Everyone could see what he actually said, and it’s clear he did not ask for a quid pro quo. Trump mentioned at the beginning that the U.S. had been very good to Ukraine. Later he asks Zelenskyy to look into the dropped prosecution. There is clearly no correlation between the two. The whistleblower’s depiction was fiction.

It is troubling that an impeachment inquiry would be opened when it’s not clear what crime has allegedly been committed. Consider the Clinton impeachment, where Whitewater prosecutor Ken Starr presented Congress with 11 clear possible grounds for impeachment. Here, the whistleblower fretted about possible campaign finance violations, which the DOJ quickly knocked down.

Whatever the vague phrase “quid pro quo” means, it is not a crime. Presidents have always asked governments we aid to do something in exchange for that aid. That can include investigating Americans possibly committing crimes abroad. Here, President Trump was looking for assistance in investigating the extent of Ukraine’s admitted role in interfering in the 2016 election. He was also curious about Biden in the wake of Biden publicly boasting about withholding $1.5 billion in aid to Ukraine if they didn’t fire the prosecutor investigating a corrupt company called Burisma. Burisma happened to be putting millions into the pockets of Biden’s son.

In 1828, Webster’s Dictionary defined it in 1828 as “ill behavior; evil conduct; fault; mismanagement.” Klein claims that it “wasn’t a light crime, but an abusive act.” Furthermore, a 2015 Congressional Research Service report surveyed every House impeachment in American history. It concluded that “less than a third have specifically invoked a criminal statute or used the term ‘crime.’”

Definition of High Crimes and Misdemeanors

Klein analyzes the definition provided by various legal scholars. But they undermine his claim. The scholars address more serious actions than Trump’s phone call — even if Trump had done something wrong.

One describes it as offenses that “so seriously threaten the order of political society as to make pestilent and dangerous the continuance in power of their perpetrator.” Another pair of legal scholars said that “impeachable offenses involve corruption, betrayal or an abuse of power that … risk grave injury to the nation.”

I’ve sat through EVERY interview so far of this so called “impeachment inquiry” & the President hasn’t done anything to possibly impeach him for.

Another aspect of political targeting is to go after the people beneath the target. It makes the target look bad. Even better from the prosecutor’s point, sometimes the underlings will turn on the target. They’re usually not powerful, wealthy and connected unlike the target so it’s easier to take them down. The bar came after me because I was I was an underling. Their real target was my former boss.

Similarly, the left is going after Trump’s private attorney Rudy Giuliani. New York prosecutors are looking into his dealings with Ukraine. This could lead to his disbarment. Going after people in politics who are lawyers is one way the left targets conservatives. State bars are generally controlled by people on the left, so it is easy to get them to go after conservatives. It’s no coincidence the left chose him to investigate. His law license makes him a ripe target.

The Outcome is Obvious

House Democrats will impeach Trump. They control the House. They have the votes. We’ve seen this type of witch hunt play out all too often. It’s all about insinuation. They don’t have a real crime to pin on Trump. Do they give up? No. They just act like he did something awful.

Fortunately, wiser heads in the Republican-controlled Senate should stop the process from removing Trump. The Democrats will never get enough votes to convict. They need 67. That means getting at least 16 Republicans to vote with them. That’s almost impossible.

Here’s a better idea. In fact, it’s such a good idea the Framers put it into the Constitution. Election Day is now less than one year away. We, the People will again go to the polls. Let them judge if President Donald Trump should be removed from office. And in the meantime, the House can finally get to the business of the people rather than the business of overthrowing the 2016 election.

Just goes to show there are NO patriots alive today. If there were, this wouldn’t be happening. Instead, we all sit around with our thumbs up our noses, making cute little remarks and comments on social media and here, letting Qtards have their day and letting the crime and treason run rampant. Because we - yes, WE - EVERY SINGLE ONE OF US - have accepted peaceful slavery over dangerous freedom. The Founding Fathers would be slapping us all silly right now. 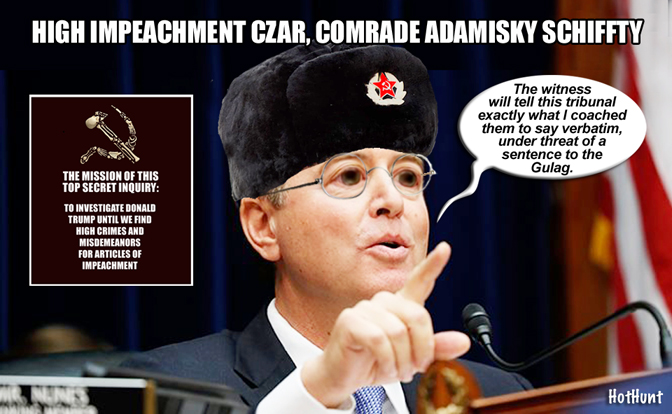 Colonel Schlichter: KICKING ASS & TAKING NAMES AS USUAL!
I was USAF, but I’d have followed this man into hell and back and...!
Oh, I just described the Obama maladministration. Donald Trump is the “and back” part! PLEASE SHARE THE HELL OUTTA THIS ONE!
https://townhall.com/columnists/kurtschlichter/2019/11/04/trump-is-derailing-the-elites-gravy-train-n2555787

They need 67. That means getting at least 16 Republicans to vote with them.

Currently there are 45 Democrats + 2 Independents that vote Democrat (totaling 47), and 53 Republicans. So that means they would need 20 Republicans, not 16, to reach 67. Assuming that all Democrats & Independents voted to convict. Conversely it takes on 34 Republicans to not convict.

Young grasshopper. You must learn to think like a criminal. Those senators will get calls and they won’t have a choice but to convict. We are putting them in a very bad situation. Their families will be targeted by the deep state child molesters.