Solving a Rubik’s Cube is hard enough for most people.

Solving a Rubik’s Cube with one hand is even harder.

Harder still: designing a lone robot hand capable of solving a Rubik’s Cube all by itself. Such a machine would require unprecedented dexterity and coordinated finger joint movements, as well as the ability to learn a new task over time and independently the way a human would.

In a statement hailing their achievement, researchers said the robotic hand, which they’ve dubbed “Dactyl,” moves robots one step closer to “human-level dexterity.” 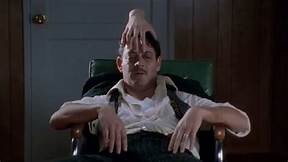 I’m more impressed that it can manipulate the cube with one hand.

You mean it peeled the stickers off and moved them?

I’ll be impressed when a stock article written by AI doesn’t read like a 6 year old wrote it...and a slow witted 6 year old at that.

Got 2 cousins who are a CEO and a CTO for good sized companies and they said AI is useful Tool in some instances but is actually creating more jobs at this point than it is taking.

They said the things we read about are the VERY CUTTING EDGE and not what’s being sold out there.

AND any AI decisions based on massed data have to be double checked by humans anyway.

I remember in the 90s when typing was gonna be a thing of the past by 1999 because of voice typing.

I type 100wpm and can still make extra money on the side with that speed.

There will be jobs for a while folks.

There was this one episode of The Big Bang Theory in which Wolowitz has this robotic hand....

10 posted on 10/19/2019 4:11:59 AM PDT by HartleyMBaldwin
[ Post Reply | Private Reply | To 9 | View Replies]
To: bitt
I'm not at all impressed. There already are 'algorithms' for solving Rubik Cubes. The 'robot hand' was obviously programmed by a human to perform such an algorithm. To me, this is not artificial intelligence.

True artificial intelligence will be demonstrated when a robot programmed for tasks such as dishwashing, or assembling automobiles, or something like that, will pick up a Rubik Cube, ON IT'S OWN, and then fiddle with it until it is solved. We're a long long way from that.

It did no such thing. This thing has memory and a micro processor loaded with code that directs it store information and follow a very simple “if then” equation while storing the results and trying it again. It does this repeatedly and quickly. It does this based on logic developed and programmed into it. It is doing nothing more then what it was told to do by some probably very smart person.

The programmer and mechanical engineer solved the cube using the hand the built.

Interesting with a touch of scary.

It used to be newspapers wrote articles on a 4th grade level to many could comprehend. Today’s writing? Ugh.