The number of combined cases of syphilis, gonorrhea and chlamydia in the United States rose to a record high last year, including an alarming jump in the rate of newborn deaths caused by congenital syphilis, according to figures released by the Centers for Disease Control and Prevention on Tuesday.

More than 2.4 million syphilis, gonorrhea and chlamydia infections were reported in the United States in 2018, an increase of more than 100,000 cases from the previous year, the center said in its annual Sexually Transmitted Disease Surveillance Report.

It attributed the increase to several factors, including a decline in condom use among young people and men who have sex with men; increased screening among some groups; and cuts to sexual health programs at the state and local level, which led to clinic closures and fewer opportunities for counseling or testing for sexually transmitted diseases.

There were more than 115,000 syphilis cases reported to the center in 2018, a 71 percent increase since 2014. That included a 22 percent increase from 2017 in the number of newborn deaths related to congenital syphilis, which is passed from mother to child during pregnancy, the center said on Tuesday.

It said the increase in newborn deaths was a consequence of rising syphilis rates among women of reproductive age, whom it encouraged to practice safer sex and to get tested for S.T.D.s by their health care providers.

“There are tools available to prevent every case of congenital syphilis,” Gail Bolan, director of the C.D.C.’s Division of S.T.D. Prevention, said in a statement.

“Testing is simple and can help women to protect their babies from syphilis — a preventable disease that can have irreversible consequences.”

TOPICS: Culture/Society; News/Current Events
KEYWORDS: cdc; gonorrhea; homosexualagenda; homosexuals; std; syphilis Navigation: use the links below to view more comments.
first 1-20, 21-40, 41-46 next last
Giving male homosexuals anti-retrovirals to treat AIDS encourages them to bugger each other more and get other diseases. Maybe we shouldn't spend a whole month celebrating buggery (Pride Month).
1 posted on 10/09/2019 6:18:33 AM PDT by karpov
[ Post Reply | Private Reply | View Replies]
To: karpov
It attributed the increase to several factors, including a decline in condom use among young people and men who have sex with men; increased screening among some groups; and cuts to sexual health programs at the state and local level, which led to clinic closures and fewer opportunities for counseling or testing for sexually transmitted diseases.

It can actually be attributed to the moral breakdown the left has pushed on us.

Did they seriously expect anything different?

All the wanted was to have their deep commitment to mutually monogamous relationships recognized.

I take it Bill was on a tour of his own while Hillary was on her “listening” rounds?

Yet they’ll scream “Trump’s fault!” for the clinic cuts when the issue is immoralism and irresponsibility on their part.

At least they aren’t talking about bringing back morality, virtue, scruples, and monogamy.

Which means to progressives that it is complicated.

Don’t forget all the whores having multiple children with all different men.

8 posted on 10/09/2019 6:55:52 AM PDT by angcat (THANK YOU LORD FOR PRESIDENT TRUMP!!!!!)
[ Post Reply | Private Reply | To 1 | View Replies]
To: metmom; fwdude
There’s a graph from the report that clearly shows to anyone with two brain cells to rub together that the reason for the rise is the behavior of MSM, Men having Sex with Men. Of course, the CDC does not discuss this at all in their press release. 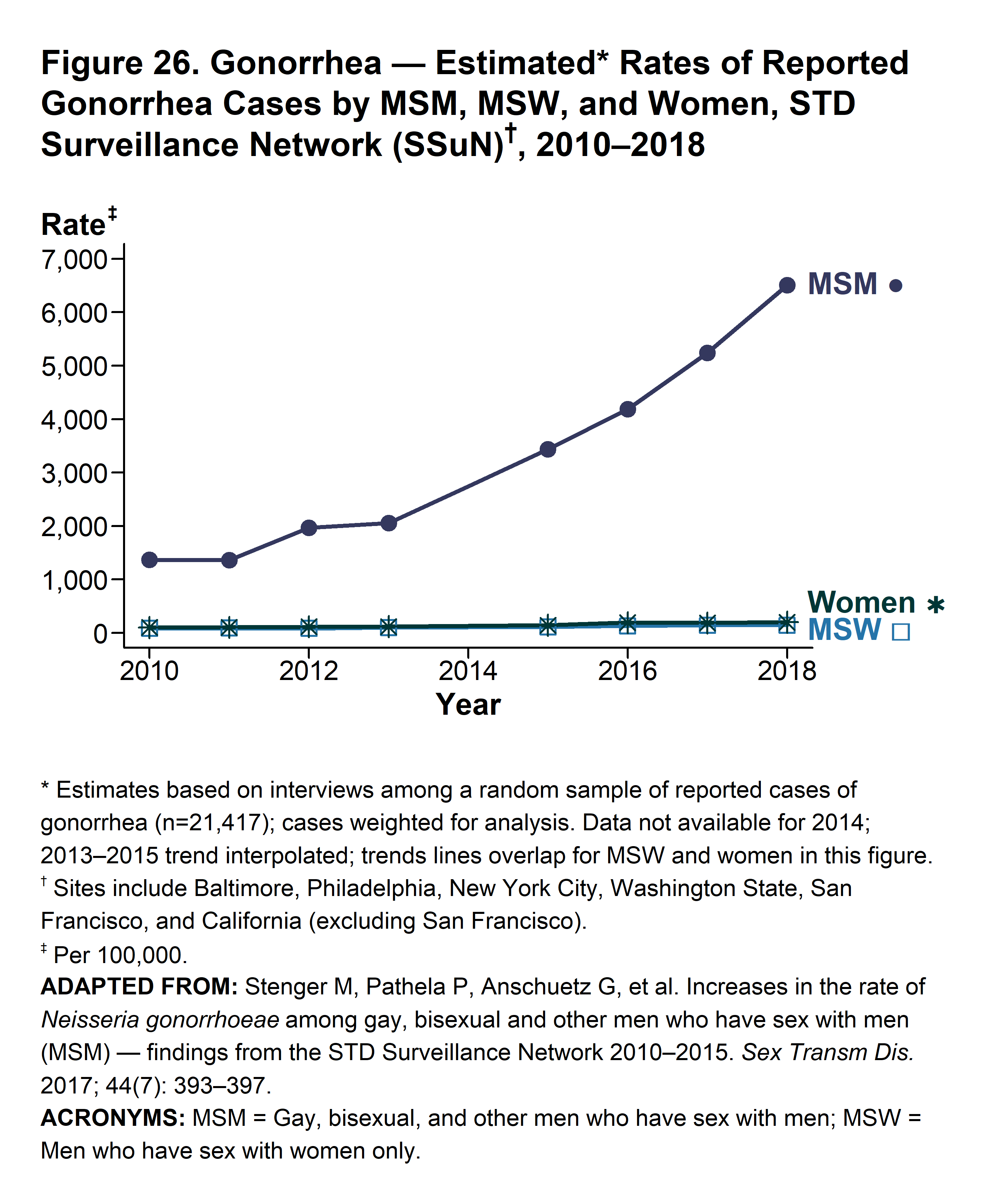 It seems that the more homosexuals are affirmed, the less healthier they get, ironically.

Take God out of the schools and everywhere else, and you end up wondering why bad stuff just “happens.”

11 posted on 10/09/2019 7:15:05 AM PDT by Theophilous Meatyard III
[ Post Reply | Private Reply | To 1 | View Replies]
To: karpov
I remember the first article I ever read on AIDS, back in the early '80s. I believe it was by Patrick Buchanan in The American Spectator. Along with AIDS, he discussed some of the other medical results of promiscuity and he made a comment that has always stayed with me; something like, "you can violate the ecology of the human body only so much before disastrous things start happening."
12 posted on 10/09/2019 7:16:54 AM PDT by Southside_Chicago_Republican (The more I learn about people, the more I like my dog.)
[ Post Reply | Private Reply | To 1 | View Replies]
To: fwdude

Interesting...if only the WOKE ones thought about their bodies like they TRY to think about the EARTH....

The Gays and Liberals still blame Reagan for the AIDS Crisis.

15 posted on 10/09/2019 7:36:32 AM PDT by Kickass Conservative (Democracy, two Wolves and one Sheep deciding what's for Dinner.)
[ Post Reply | Private Reply | To 5 | View Replies]
To: karpov
Whod-a-thunk that perverts with unhealthy lifestyles sticking their wieners into the poopy butts of other perverts would result in them transmitting nasty diseases? How unexpected and unpredictable. /s

Next thing you know they will be telling people not to drink water out of toilets.

From it, I conclude that sodomy is bad for you.

Thanks for the graph.

You don’t need to read the article or the comments. All you need is the graph and an IQ above room temperature.

Because it’s all about MEEEEEEE!!!! these days.

Here’s a wild idea, keep your pants zipped and you won’t be another statistic.