Reports Of A Change In Tune? Speaker Pelosi Is Feeling Out Caucus On Impeachment
Townhall ^ | 09/24/2019 | Matt Vespa

For the most part, Speaker Nancy Pelosi has been a rational bastion in the ‘get Trump’ fever that has overtaken House Democrats. The calls to impeach Trump have been drumming for nearly four years has always been met with skepticism from Pelosi, who knows the risks. It will galvanize the GOP like no other, push away Independent voters, and will offer loads of ammunition to be used in political ads. With the presidency in Republican hands, along with the bully pulpit, the GOP has the advantage in this fight, especially if the reasons to impeach are seen as politically driven. The fact is that they are politically-driven; they just don’t like Trump. He is being impeached because he won the 2016 election. That’s it. The Trump-Russia collusion myth was their best shot—and Robert Mueller torpedoed that.

They then tried to take the impeachment train into obstruction junction but also got stalled there because the evidence was severely lacking. So, now we have this second-hand and anonymously sourced account that Trump tried to coerce the Ukrainian political leadership to look into former Vice President Joe Biden who reportedly got a prosecutor from that country removed from a case involving his son. The whistleblower did not listen in on the call, by the way. And it’s not the job of the intelligence community to snitch to Congress on what the president says to other foreign leaders. So, in the end, we have a controversy here because Trump spoke…with another foreign leader. This is…groundbreaking (I cannot roll my eyes hard enough). Now, it also has some people asking what the hell Biden’s son was doing. Yet, this could be the high-water mark for impeachment. Pelosi is reportedly now feeling out the caucus, of which a majority support an impeachment inquiry, over what to do next. Granted, again, we have anonymous sources, but the sign that there is movement is grounded in Rep. Debbie Dingell’s (D-MI) move where she now supports impeachment proceedings. She was a Democrat who criticized her party for ignoring white working-class voters, calling Trump voters racist, and adopting an identity politics mindset (via WaPo):

Speaker Nancy Pelosi has been quietly sounding out top allies and lawmakers about whether the time has come to impeach President Trump, a major development as several moderate House Democrats resistant to impeachment suddenly endorsed the extraordinary step of trying to oust the president.

Pelosi, according to multiple senior House Democrats and congressional aides, has been gauging the mood of her caucus members about whether they believe that allegations that Trump pressured the Ukrainian president to investigate a political foe are a tipping point. She was making calls as late as Monday night, and many leadership aides who once thought Trump’s impeachment was unlikely now say they think it’s almost inevitable.

The officials spoke on the condition of anonymity to speak frankly.

Pelosi’s conversations — and reconsideration of her long-held position that impeachment is too divisive — come amid a growing clamor for impeachment that extends beyond the party’s liberal base and many Democratic presidential candidates to moderate lawmakers in competitive House seats.

The drama is all building toward Thursday, a make-or-break moment in the eyes of House Democratic leaders. Pelosi gave the acting director of national intelligence, Joseph Maguire, until then to turn over the whistleblower complaint. Under the law, any matter deemed of “urgent concern” is supposed to be shared with Congress. But the Trump administration has refused to hand over the material — despite an inspector general’s determination that it has met that threshold.

Senior Democratic officials cautioned that no steps have been finalized, and there were still questions about timing and how to conduct the proceedings.

…in interviews with multiple Democratic lawmakers and aides on Monday, almost everyone said the House had reached a point of no return on impeachment.

For example, impeachment dominated a meeting of chiefs of staff for lawmakers in competitive districts on Monday, according to one official familiar with the talks. The individual said the session grew heated and angry, pitting those congressional aides who thought it was time to back impeachment against those who worry about the political fallout.

Another significant shift came from Rep. Debbie Dingell (D-Mich.), who has urged Democrats to sharpen their appeal to Trump voters and protect the party’s centrist flank. On Monday night, she announced support for an impeachment inquiry “because we must follow the facts and hold the President accountable.”

Let’s see what happens. There is absolutely no way impeachment succeeds with a Republican Senate. It’s just not going to happen, so what’s the benefit of all this, which is something that Pelosi has most certainly considered. It will satisfy the rabid left-wing base that infests the coasts and urban areas, but is that worth super-energizing Republican voters, rural voters, and alienating Independents? This could come to blows between the far left and the more establishment, centrist wings of the party. In some ways, it already has—so let’s hope this division boils over in a messy fashion. This is what happens when you get Democrats running things, by the way.

From reports, sounds like she is going to formally start the process.

PredictIt odds of President Trump's impeachment by the end of his first term have soared in the last 12 hours in heavy volume.

About 14 hours ago, volume started pouring in, increasing the odds from about 35% to almost 60% in the overnight hours. 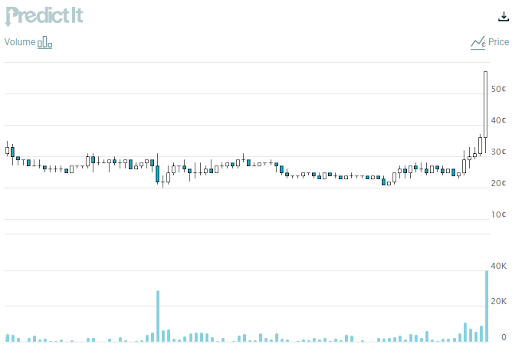 Tuesday morning, the odds have traded from 40% to 60% range - consolidating after a massive ramp.

Unless there is a clear, understandable charge, she runs the risk of starting a civil war.

The tree of liberty must be refreshed from time to time with the blood of patriots and tyrants. - Thomas Jefferson

I don’t know how many moves ahead Trump has planned, but I am convinced he and his team actually launched this “Ukraine Whistleblower” narrative.

It seems to be working perfectly. Its got even CNN talking about Biden’s corruption in Ukraine, thus hobbling Biden even further. Its got the media once again chasing a completely BS story. Its got his GOP opponents saying stupid things which will come to nothing.

The Dems going bonkers on “impeachment” may be yet another PR benefit.

Biden reportedly will call for Trump’s impeachment later today if Trump does not provide the transcript for the call.

The Democrat House impeaching Trump does not worry me as much as the thought of those snake Republicans in the Senate pulling a last minute “McCain”.

On what specific charges?

I AGREE PLEASE DO IT HOUSE SPEAKER! Get the popcorn out and watch the Rats hang themselves

Protect Biden, and themselves and I’m fairly confident others have “ wet their beaks” in similar manners...

I am as well. I swear we’ve seen this before, and overall it smacks of the briar patch to me. Throw in folks asking HOW corrupt Biden is instead of IF, and this looks like Trump’s typical maneuvering (and the Dems typical falling for it).