(Moderator, if I can't excerpt the BBC, please note)

The fires are now under control at both facilities, state media said.

A spokesman for the Iran-aligned Houthi group in Yemen said it had deployed 10 drones in the attacks.

The military spokesman, Yahya Sarea, told al-Masirah TV, which is owned by the Houthi movement and is based in Beirut, that further attacks could be expected in the future.

He said Saturday's attack was one of the biggest operations the Houthi forces had undertaken inside Saudi Arabia and was carried out in "co-operation with the honourable people inside the kingdom".

A few more attacks like this would be bad publicity for the potential IPO of ARAMCO.

Gas prices will be up, I guess

That IPO might never happen anyhow. Vastly overvalued in the early iterations.

And the IPO is hardly the biggest concern if a few drones can knock out a refinery that can handle 7% of ALL the world’s production. This is a whole new scary capability.

Which is to say, proxies of Iran attacked the Saudis.

For sure.. Any excuse will do.

There is no refinery at abquiq.

Time for the Saudi coalition to wipe out Yemeni terrorists.

Seems to be the drones used have quite a range to have been launched from Yemen.

Seems like a pretty big escalation here. Iran is just asking for a real beat down. I expect after Trump is reelected the Saudis and Israelis will take care of them.

For sure.. Any excuse will do. (re higher gas prices)

Would I be wrong in saying our intelligence would know from where these were sourced? Could we not take out these installations in Yemin?

Everybody could do it. Including Saudis themselves. There are too many parties to benefit. My guess you need to wait for the official line from MSM and suppose the opposite.

Which is to say.

Iran attacked the American, Israeli and Saudi one world order...

Was originally supposed to work in the hospital in Abqaiq, but got sent to Hofuf instead, further south and inland. The Abqaiq camp is built around that giant refinery and potential loss of life of ARAMCO employees and their families is pretty big. It’s close enough to Dharan that the folks at ARAMCO headquarters will see/smell it.

Third terrorist attack on that facility. One in 2006, a minor one in 2015 with a shooting at the main gate and now this one.

These kind of attacks on ARAMCO are an existential threat to the Saudi state.
EVERYONES Rice Bowl in Saudi is tied to ARAMCO. 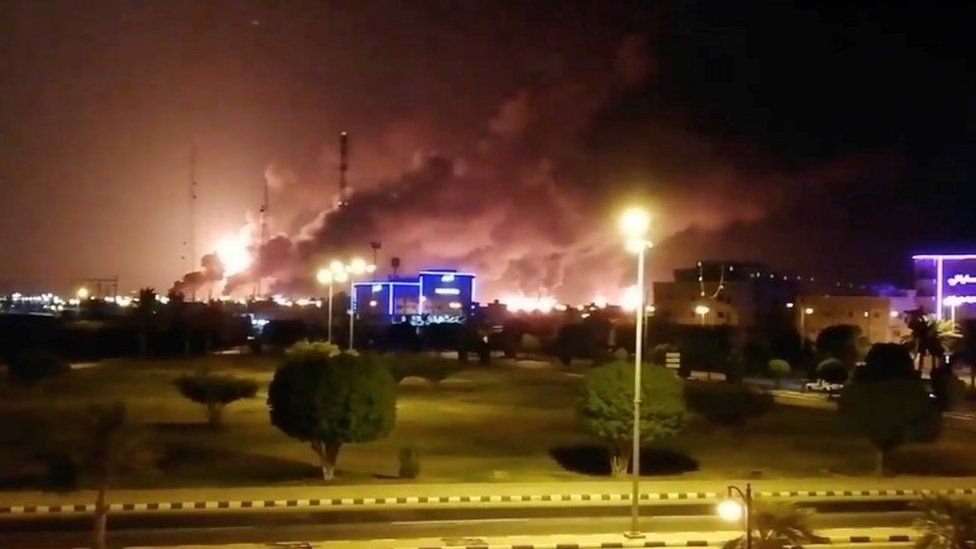 long overdue. And send all the "palestinians" back to Jordan, where they belong.

Of course they are. Let us take more loans to finance another war...

It will be great.

Better than the last one...

And Khadaf.. well these two

Let us destroy our nation for that.

This would be good news for Alberta, if it could only get its oil to the coast to go on the world market.

Thanks Trudeau, for all that you do for my province.