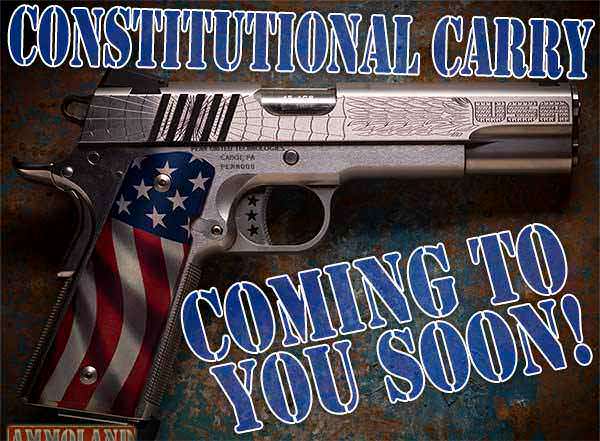 Oklahoma passed Constitutional Carry in December of 2018. The law was vetoed by Governor Mary Fallin. The legislature passed the bill again, in 2019. The statute was signed into law on 27 February, 2019, by Governor Kevin Stitt. The law restores the right to carry arms in most public places, openly or concealed, without a government permit. It is essentially what the state of law was in 1789, when the Constitution was ratified, and the modern United States came into existence.

Representative Jason Low (D-OKC) filed a veto referendum on 12 August, 2019, during a cluster of mass public killings. He may have looked to capitalize on the media pressure created for gun control, to maximize support for the veto referendum.

The effort only had 17 days to collect over 59,000 signatures. It appears to have failed. From ktul.com:

OKLAHOMA CITY (AP) — A group seeking to stop a new law that would allow people in Oklahoma to openly carry firearms without training or a background check is acknowledging they fell short of the number of signatures needed for a statewide vote on the issue.

It failed. We should know by how much, this week.

Good news. Thanks for posting.

THAT is the only discussion that should be occuring on d.c. instead of adding to infringements already in place. As for nuzzlin’ joe and beatOmeato’s proclamations at last nights prattle-fest about TAKING AWAY your AR15s and AK47s, choosing truth over fact could be a mistake in this case.

Um. Didn’t we have this conversation about 240 years ago? I seem to recall a lot of people dying for “constitutional _______”

Carry in Walmart and Kroger.

Nanny Bloomers, via the Moms and Everytown.

It failed. We should know by how much, this week.

The number of signatures that they collected was reported to be 37,057. Around 22,000 short of what they needed.

They have already promised they'll be back. The Disarmists never, ever give up.