The warships were originally designed to field a fleet of anti-submarine warfare helicopters and respond to humanitarian aid and disaster relief. However, in December Prime Minister Shinzo Abe approved a move to convert the two ships to field the STOVL F-35s in parallel with Japan’s purchase of 42 F-35Bs, reported The Diplomat.

In March, the Abe government asked then-Marine commandant Gen. Robert Neller if the U.S. would consider deploying Marine F-35Bs from Izumo and Kaga, reported The Asahi Shimbun earlier this week.

Prompted by the request, the Marines are now standing up groups to determine the technical feasibility of deploying U.S. F-35s from the two ships ahead of the Japanese Self-Defense Force F-35Bs being fielded.

While the two ships were built with an eye toward STOVL fighter operations, the U.S. has to make an independent determination if their F-35s can operate on Izumo and Kaga.

For example, U.S. Wasp-class big deck amphibious ships have to undergo deck strengthening and have new heat resistant flight deck treatments as the Marines replace their AV-8B Harriers with F-35Bs. It’s unclear what additional work would be needed to make the two ships ready for F-35s. The Marines currently have an F-35B squadron forward-deployed to Japan — the “Green Knights” of Marine Fighter Attack Squadron (VMFA) 121 that operate with the Wasp Amphibious Ready Group as part of the 31st Marine Expediniaory Unit.

The Marines have charted out a similar relationship with the U.K. Royal Navy to deploy a squadron of F-35Bs from the new HMS Queen Elizabeth (R08) carrier for its first deployment.

For Japan, the move comes as the Chinese expand their regional naval ambitions.

“Chinese naval capabilities are growing rapidly in the region and I think this is an important step in strengthening the US-Japanese alliance. The Japanese acquisition of F-35Bs will enhance their maritime and aviation capabilities in the region and will further bolster interoperability between Japanese and U.S. military forces,” Eric Wertheim, author of U.S. Naval Institute’s Combat Fleets, told USNI News, Friday. “It will also help ease the burden on U.S. assets that are stretched thin responding to a long list of global crises.”

Beijing has been critical of Japan’s move to put fighters on the two warships saying that they could be considered an attack platform and a violation of Japan’s pacifist constitution.

In March, former director of national intelligence and former commander-in-chief of the United States Pacific Command Adm. Dennis Blair wrote that fielding F-35s on Izumo and Kaga could be considered a defensive move.

“The challenges to defending the Self-Defense fleet against aircraft armed with cruise missiles (or hypersonic glide weapons) underscore the need to upgrade the Izumo-class to operate the F-35B STOVL aircraft, as the average range of ship-killing missiles is in the hundreds of miles while the average range of defensive ship-launched antiaircraft and antimissile missiles is only about 100 miles,” wrote Blair and retired Capt. Christopher Rodeman in Proceedings.

“Armed with short-range anti-ship missiles, the F-35B would be very effective against ‘swarm tactics’ by patrol craft or maritime militia vessels. In an “island grab” scenario, the F-35B would be invaluable in establishing the local air control required for Japan’s new amphibious regiment to retake remote islands.”

A 24,000-ton helicopter carrier has formally entered the fleet of Japan’s Maritime Self Defense Force (JMSDF) on Wednesday making the ship the largest warship Japan has fielded since the close of World War II.

The commissioning ceremony JS Izumo (DDH-183) — the first of two for the JMSDF — was held in Yokohama and attended by Defense Minister Gen Nakatani.

Billed by the Japanese as a platform to assist in anti-submarine warfare (ASW) and humanitarian aid and disaster relief (HADR) operations, the ship has flared regional tensions in neighbors— China especially — who view the ship as a power projection platform with a historically aggressive name.

“The original Izumo, an armored cruiser that participated in the Battle of Tsushima, was purchased with reparations from the first Sino-Japanese War,” wrote USNI News contributor Kyle Mizokami in 2013.

“There is little doubt all parties, particularly the Chinese, are aware of the lineage.”

Japanese paper, Asahi Shimbum, quoted an unnamed JMSDF official saying the ship would be of particular help against the growing number of Chinese submarines.

“This heightens our ability to deal with Chinese submarines that have become more difficult to detect,” the officer told the paper.

The ships can field up to seven Mitsubishi-built SH-60k ASW helicopters and seven AgustaWestland MCM-101 mine countermeasure (MCM) helicopters and carry up to 400 troops, according to U.S. Naval Institute’s Combat Fleets of the World.

The ship would also be able to field American MV-22s and potentially the short takeoff and vertical landing variant of the Lockheed Martin F-35 Lighting II Joint Strike Fighter (JSF), however Japanese defense officials have repeatedly said they have no plans to use the JSF on the Izumo.

The second ship in the class — the unnamed DDH-184 — is currently under construction at IHI Marine United shipyard in Yokohama and is planned to enter the JMSDF fleet in 2017.

The ship will be based in at the naval base in Yokosuka, also the home of the U.S. 7th Fleet. 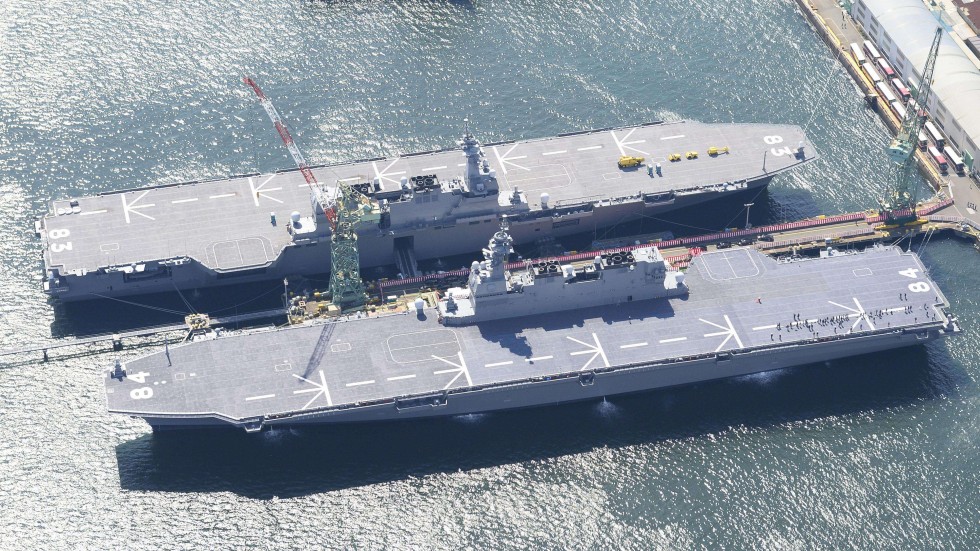 In an “island grab” scenario, the F-35B would be invaluable in establishing the local air control required for Japan’s new amphibious regiment to retake remote islands.”

Midway was the first thing I thought of when is saw “JS Kaga” in the story. The Kaga was the first Japanese carrier hit at the Battle of Midway.

And just like that the Japanese have more carriers than China.

I have some no longer with us, older relatives/friends who were combat marines, in the First Cav or US Navy Pacific war vets in the second WW, who are probably spinning in their graves with this news.

Which is why alliances need to be looked at on a regular basis.

At this time, the Japanese appear to be a better friend tha our long standing, 5 Eyes so called allies, Great Britain, Canada, Australia and New Zealand.

From the article... “Beijing has been critical of Japan’s move to put fighters on the two warships saying that they could be considered an attack platform...”

I would love to see the USA “gift” one of our older nuclear aircraft carriers to the Japanese. I bet the Chinese would $hit a Twinkie.

By the time we're done with 'em, they're pretty well beat. Japs will do better building their own. I like the cooperation, though. Beats hell out of butting heads with that lot.

Most of them are being used for training still.