A report by the Intercept outlines a recently released book titled Kochland by Christopher Leonard where the author alleges that brothers Charles and David Koch funded a 2007 report by the left-wing Third Way organization to warn Democrat politicians against the populist, economic nationalist arguments made by Lou Dobbs at the time.

Though aligned for the last few decades with Republican lawmakers, the Kochs were major supporters of the economic policies of the Obama administration which sought to enter the U.S. into the Trans-Pacific Partnership (TPP) which would have made it easier for multinational corporations to outsource additional American jobs to Vietnam and Malaysia.

American workers under TPP would have been forced to compete against workers in Vietnam and Malaysia — workforces that in some cases earn less than 60 cents an hour — thus forcing down U.S. wages.

In that effort, the Koch network spent up to $40 million lobbying for TPP before President Donald Trump took office on his economic nationalist platform and kept his promise in 2017 to kill the free trade deal with an executive order.

Most recently, the Koch network has committed to financially backing politicians, of either party, in upcoming 2020 elections who support their agenda of free trade-at-all-costs and amnesty for illegal aliens, as Breitbart News reported.

LOL! Geez, I remember when the koch boys were evil gopE funders incarnate. Guess not so much now.

2 posted on 08/19/2019 8:05:55 AM PDT by rktman ( #My2ndAmend! ----- Enlisted in the Navy in '67 to protect folks rights to strip my rights. WTH?)
[ Post Reply | Private Reply | To 1 | View Replies]
To: Mr. Mojo
the Koch network has committed to financially backing politicians, of either party, in upcoming 2020 elections who support their agenda of free trade-at-all-costs and amnesty for illegal aliens

The Kochs are enemies of average Americans, as are all free traitors.

It would be unusual to find many billionaires who think Like Trump, IMHO.

I could be wrong.

I know people that wouldn’t vote for him again if he cut 5 dollars a month from SS.

I would guess this is costing the Koch brothers many millions.

Just as evil as Soros.

The Koch brothers are snakes... The GOP needs to stop suckling at their tits.

They are the SOLE reason the GOP would not break with free trade and illegal immigration, because they are all addicted to their money.

It wasn’t COINCIDENCE that TRUMP was the only person willing to break and stand against these things... he did so because unlike ever other R on the ballot.. he wasn’t addicted to or needing the Koch brothers money.

Nothing has changed, they want their Slaves.

So the Democrats are sell-outs.
Stop the presses!!!

Major funders of the Cheap Labor Express and still owners of dozens of Bush League Republicans like Flimsey Grahamnesty and Micro Rubio.

Unless we start ejecting Bush League Republicans from office, they will keep working to complete the Bush Plan for North Mexico (aka USA)

When your company is large enough, you WANT more regulations, as you can afford to deal with it (by passing on the cost to your very large customers, many time including the government), whereas your upstart (and maybe smarter, hard-working and higher quality) competitors will be driven out of business or perhaps not even think to compete with you. Regulations cement your position, commercially speaking, and to Hell with your own personal political opinions. Such has clearly happened with the Koch brothers. 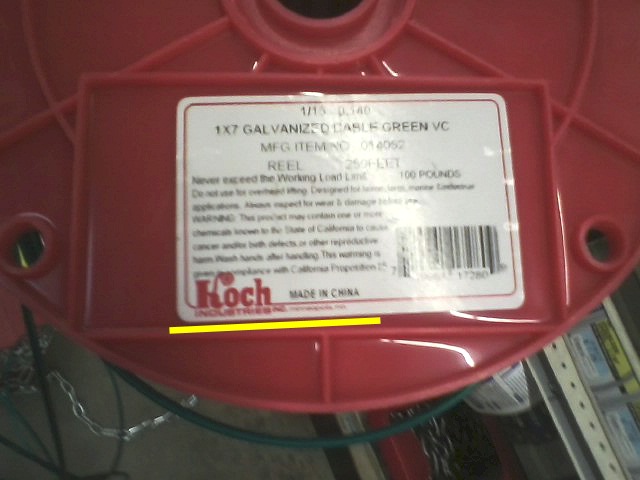 They would give to Hitler and Satan to make another dollar. They are America hating globalist who deserve to end like Randolph and Mortimer eating out of dumpsters for what they have done to their own country.

Bingo. They are what the Enemedia likes to portray as conservative - so that they do not have to give airtime to real conservatism.