Long before today's acid relations between Republicans and Democrats, President Trump and "the squad," friendships mattered over daily politics.

In a classic example, a letter going up for auction next week highlights that mood, now some 30 years ago.

Watch Full Screen to Skip Ads It is from famous letter-writer President George H.W. Bush to his long-time pal, then Rep. Dan Rostenkowski, the Democratic chairman of the House Ways and Means Committee, and during a heated fight over tax cuts.

A few weeks before the vote to give Bush his tax cut, Rostenkowski apparently came under fire from the Wall Street Journal in an attack so harsh that Bush, his pal since the 1960s, wrote him a note of support, including a wish that the fight wouldn’t interfere with their friendship.

It was written aboard Air Force One as the president flew home from an event in Spokane, Washington. “That my friendship with you now appears to some to be a burden to you troubles the hell out of me,” wrote Bush, adding, “I'm your friend. I hope you know that.”

You want a friend, get a dog.

Friendship with a crook over the American people.

But crooks, including Illinois pols, tend not to have good morals, and thus are poor choices in friendship.

I’m glad that Bush’s wish that no one else see the note has been honoured in the breach.

Here we have a most intense paradox.

The American founding idea, in part, was that in numbers would be found the wisdom of many counselors which might elude an oligarchy.

Maybe there should have been a presidential committee rather than a single president provided for in the Constitution as well— under the same philosophy. But we have what we have, and Donald Trump, that madly wealthy commoner of a fellow, comes as close to being a populist president as any we have seen in a long, long time. 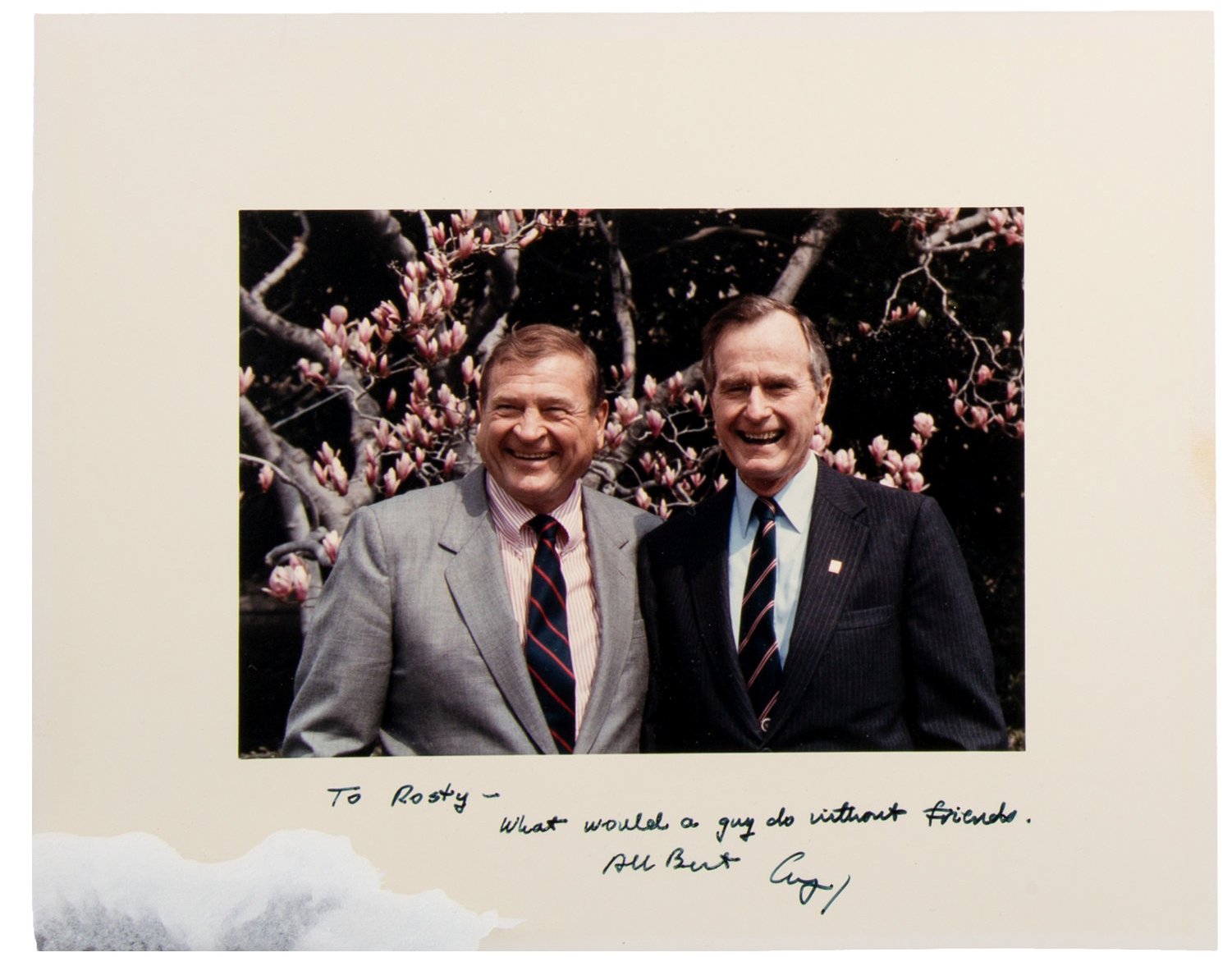 Daniel David Rostenkowski was a United States Representative from Chicago, serving from 1959 to 1995. He became one of the most powerful legislators in Washington, especially in matters of taxation, until he went to prison. Wikipedia

Taking a notorious crook as his close friend
raises troubling questions about his judgment.

That’s why he lost.

That photo would pair nicely with the pic of a seasoned citizen near climbing atop Rostenkowski’s car. Or maybe his federal BOP mug shot?

It does seem to smack of a bond of elitism, of plutocracy, in this case.

We know that’s a ticket to hell in the long run.

But I’m sure it served SOME good. There hasn’t been a GOP president that has been able to get legislation through without Democrat participation. We have to look at both sides of these things.

So GHWB was fooled by Rosty. Who would have guessed that? As I recall too Barbara Pierce Bush was just giddy around Tip O’Neill.

How’d that work out for ol’ Georgie? Pretty much handed Clinton the presidency, didn’t it? Not that hor-hay has any bad feelings; he still campaigned for Hillary over Trump.

I donated so much to lil shrub, that I had an original, autographed pix of him and his wife {long since burned because of my let down}.

How could I have been so naive?

And here’s where we ought to look for the larger hand of God, which works even amidst thickets of evil, because He is yet more powerful than the evil.

Donald Trump dreamed of uniting Republican and Democrat, which to us sounds like the dog lying down with the cat and having some crazy kind of half puppy, half kitten offspring.

But even the honor among thieves is better than no honor at all. It staves off a complete disintegration.

And the Rubicon will be crossed here, I believe, when Democrats find God again, or rather when God finds Democrats again. Many modern liberal ideas are distortions of classical God fearing liberal ideas, distorted by being focused upon an idol. To break down the idol of government while raising up the households of God to the worship of God should be the ultimate goal here — yes, a spiritual raising up of America.

What a fool. The Rats saw it as weakness and used it to destroy him.

They indeed proved to be poisonous “friends” if so. One term, and then we had President Clinton. Though again, Ross Perot with his ill fated populist movement siphoned off what would decades later be voting for Donald Trump. Don’t discount that as a huge clue to what was brewing. We Americans would rather have an honestly wicked Democrat than a pretentious, elitist Republican (and Barack Obama proved that again).

There is something to be said for doing the job people elected you to do.

Too bad he didn’t see that .

His ‘friends’ ran him out of office and made him a one term president.

His concern about his ‘friends’ gave us Bill and Hillary Clinton...

If it weren’t for Perot, Billary would not have won.