In case some have forgotten who Colin Kaepernick (“The Face of Nike, Inc” as boasted by Nike’s advertising campaign) idolizes on the t-shirts he shows off at press conferences:

That idol is the terror-sponsoring Stalinist dictator whose lifelong craving was to destroy the nation that made Colin Kaepernick a multi-millionaire and made the famously “ultra-hip and anti-racist” Nike Inc into a $25 billion plus multinational corporation.

“Black civil rights activist” Kaepernick’s idol also jailed and tortured the longest-suffering black political prisoners in the modern history of the Western Hemisphere, jailing them for longer than did apartheid-era South Africa, in fact.

Among the more famous declarations from the mass-murdering dictator who “The Face of Nike, Inc.” idolizes and who, in effect, Nike, Inc. chose to associate with over Betsy Ross to celebrate America’s Declaration of Independence:

“The U.S. is a vulture preying on humanity!”

“War against the U.S. is my true destiny!”

“Of course I knew the missiles were nuclear armed! That’s exactly why I begged Khrushchev to let me fire them against the U.S.!”

But let’s hear from someone with perhaps better insights into Fidel Castro’s mindset than I have:

“You Americans just don’t understand it.  The depths of my brother Fidel’s hatred for your country cannot be imagined by you Americans.  His intention—his OBSESSION!—is to destroy the U.S.!” (Juanita Castro testifying before the House Committee on Un-American activities on June 1965, shortly after defecting from Cuba.)

All that hipster and liberal blather about Colin Kaepernick’s “courage!” for his frequent showboat denunciations of the homeland that made him a multi-millionaire gets a bit old. As an antidote I’ll offer a black American for whom the compliment of courageous truly seems to apply. See if you agree:

Don't look for this from the Congressional Black Caucus, or anywhere in the MSM, including (especially!) The History Channel or PBS, but the second in command of the freedom-fighters who hit the Bay of Pigs beachhead was a black Cuban (and today a proud U.S. citizen and retired Major General of the U.S. Amy) named Erneido Oliva.

For three days his force of mostly volunteer civilians battled savagely against a Soviet-trained and led force 10 times their size, inflicting casualties of 20 to one. To this day their feat of arms amazes professional military men. Morale will do that to a fighting force. And there’s no morale booster like watching Fidel Castro and Che Guevara ravage your homeland and families, believe me.

When his betrayed, decimated, thirst-crazed, and ammo-less men were finally overwhelmed (but NOT defeated!) by Castro’s Soviet-led bumblers at the Bay of Pigs, Oliva snarled at his brainless eunuch of a Castroite opponent, Jose Fernandez: “the only reason you’re holding a gun on us right now, Fernandez, is because we ran out of ammo.”

During almost two years in Castro’s dungeons, Oliva and his men lived under a daily firing-squad death sentence. Escaping that sentence would have been easy, as repeatedly and forcefully explained by their KGB-trained interrogators: simply sign a confession denouncing the U.S., or go in front of mics and cameras and denounce the U.S.

This is to say, if Oliva and his men would merely say or write the very sort of thing that a smirking Colin Kaepernick broadcasts at press conferences for free publicity and hipster celebrity status, they would avoid death from a Castroite firing squad, probably preceded by torture.

Considering their betrayal on that beachhead by their “allies” you might think these men had pretty good cause to sign such a denunciation. The Castroites certainly figured they had it in the bag…..

of influence in the media, Academia, Hollywood, etc……Speaking of which:

“These Cuban exiles, for all their chest-thumping and terrorism, are really just a bunch of wimps!” Michael Moore writes in his book “Downsize This!”--That’s right. "Wimps!” Michael Moore’s insults target the Bay of Pigs freedom-fighters for particular scorn. “Ex-Cubans with a yellow stripe down their backs,” he calls them, on top of “crybabies!” Michael Moore was the Democratic Party’s guest of honor at their 2004 Convention.

"A soldier to the bone," that's former Secretary of State General Alexander Haig referring to Erneido Oliva, whom he worked with in the early '60s. " One of the most fiercely honorable men I have ever known."

Pandering to the miniscule minority is a good business ethic

Nike is okay for track and field but I prefer Adidas.

NIKE -
the only sneaker for people who hate America and Americans

New Balance for me.

That would be Colon Crapstick. The washed up quarterback.

I have one last pair of new nikes in the bedroom when those wear out that is it for me.
Sad because i have been wearing Nikes since i was around 10 yrs old.

Just got my NB’s yesterday. First since USAF basic...

He wasn’t a “star”...He was a very short lived NFL player whose glow was dim in my opinion...

He was projected to be a star, but never made it...He ended up being a reject...

Pandering to the miniscule minority is a good business ethic... to go out of business.

Nike has a long history of hating America. Why anyone still buys from them is mind boggling. The US wallet should have put them out of business 30 years ago.

Nike shoes are like a status symbol to those idiots that buy them, they don’t care that Nike hates America 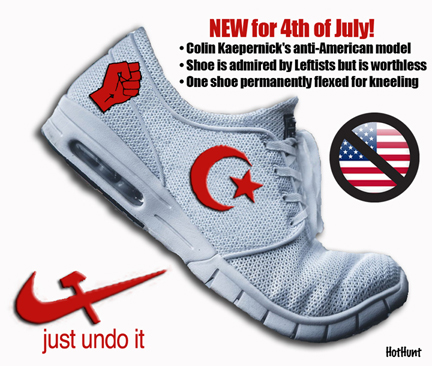 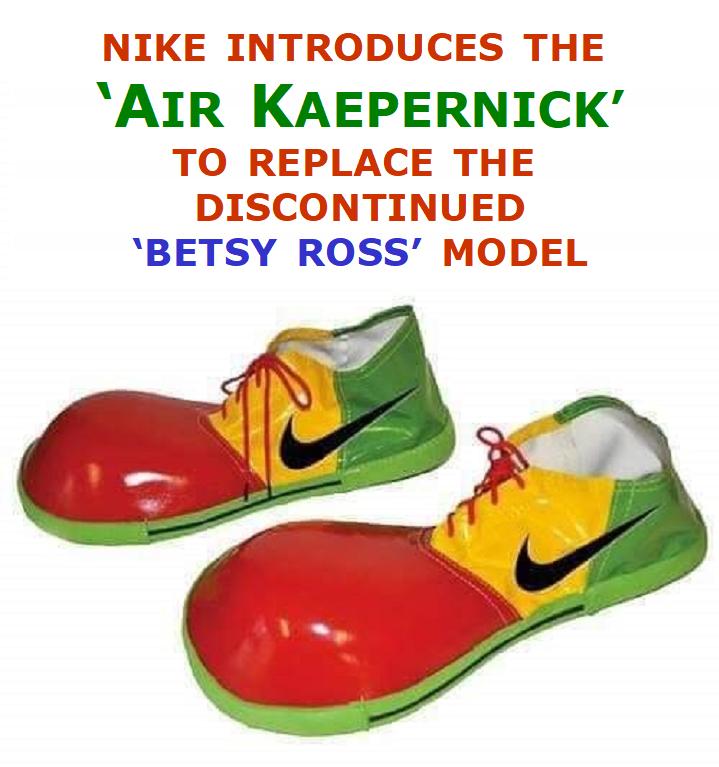