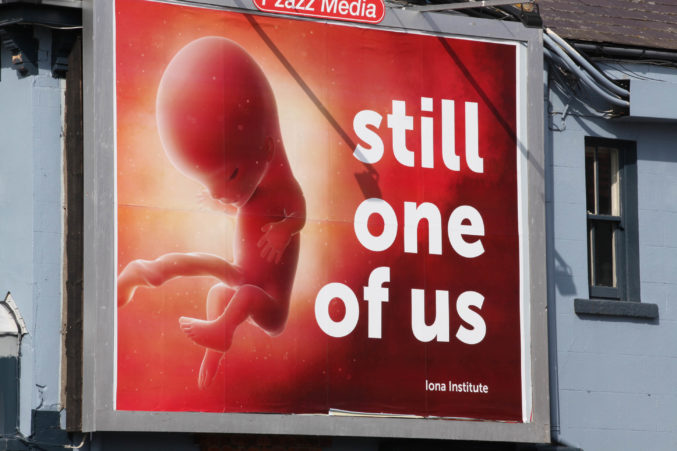 Facebook has censored our new ‘still one of us’ ad campaign which we launched last week. It has been placed behind a notice of warning and we are no longer allowed us to promote it. The campaign is currently running on a number of billboards in various parts of the country and we had extended the campaign to Facebook where we were paying a small amount (€150 in total) to bring it to a wider audience.

The company said the image of an unborn child that appears in the ad comes under the heading of ‘graphic’ or ‘violent’ imagery. Below is what Facebook users now see where the ad once appeared. (Note, we can still post the image on our Facebook page but cannot pay to bring it to a wider audience).

Needless to say, there is nothing graphic or violent about an image of an unborn child in the womb. On the contrary, it is extremely life-affirming.

In fact, the European Parliament is current running a video that appears on Facebook and elsewhere called ‘Choose your future’. It opens with an image of an unborn child in the womb very like the one used in our campaign. Should Facebook also declare this to be ‘graphic’ content?

This decision by such an enormous company as Facebook affects the ability of the pro-life movement in general to get its message out to the public even in a gentle way. Are we now at a point where images of an unborn child in the womb cannot be shown in public even though parents see such images every day in hospitals all over the country and have no hesitation showing such images to their children?

We are in a new and censorious era. The Facebook decision is extremely concerning. We are currently trying to have it reviewed and will keep you updated.

Facebook deserves to suffer the wrath of the public over this.

But how do we give them the message?

The tide is slowly but surely turning

Class-action lawsuit in the billions.

Militant fangtooth feminazis flagged it, and farcebook bowed down in obedience to the man haters.

And Salvini hasn’t said a peep.

The nazis are burning books again ....

I wonder if anyone makes an organic rope these neo-fascists will one day be hung with (if the mobs even bother)?