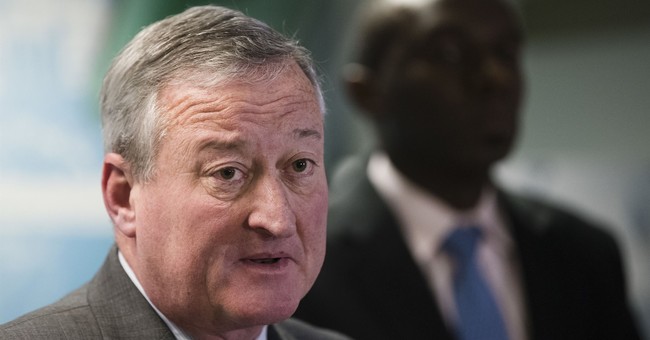 It was Philadelphia Mayor Jim Kenney’s first week on the job as mayor when police officer Jesse Hartnett was fired upon in his patrol car at close range by Edward Archer. Hartnett sustained major injuries to his arm but still managed to heroically give chase to his assailant. Archer was apprehended and confessed to the crime.

When an officer is shot in most cities, it's headline news. This particular story was even more sensational because surveillance cameras captured the point-blank shots into the patrol car fired by Archer, followed by a seriously wounded Hartnett lurching out of his car and chasing Archer into the night.

Jim Kenney’s first press conference as mayor was called not long after the incident, arrest, and confession from the suspect. Standing at the mayor’s side was Philadelphia’s also relatively new police commissioner Richard Ross. The press was eager to hear the details of Officer Harnett’s condition, and the motivation behind the cold-blooded attack we all watched on film.

Ross said Archer told police he believed the department defends laws that are contrary to Islam. Capt. James Clark, head of the homicide unit and also present at the press event, said Archer told investigators: "I follow Allah. I pledge my allegiance to the Islamic State and that's why I did what I did."

Not if you’re a modern-day progressive Democrat. The newly elected mayor of Philadelphia took to the podium after his police and quickly offered his assessment.

“In no way, shape or form does anyone in this room believe that Islam or the teaching of Islam has anything to do with what you’ve seen on the screen,” said Kenney.

If looks could kill, Kenney would’ve been in danger.You should have seen the side-eye from Commissioner Ross as he looked on and listened to his newly elected boss ignore the literal confession of the gunman.

With this in mind, it shouldn’t come as a surprise that the Mayor had a tepid response to an alarming Facebook video post discovered from the Muslim American Society Islamic Center in North Philadelphia.

The footage shows very young kids singing and speaking in Arabic as they perform a celebration of something called “Ummah (Nation) Day.”One girl can be heard singing, “We will chop of their heads to liberate the sorrowful and exalted Al Aqsa Mosque.”

That mosque is located in Jerusalem, FYI. So we know the heads they’re “chopping off.”

In other videos, the kiddies sing together their rehearsed songs about “the blood of martyrs” and “rebels, rebels, rebels.”It’s the stuff of Sesame Street, right?Assuming the street ran red with the blood of the infidel Mr. Hooper, of course.

“The city of Philadelphia condemns bigotry in all its forms,” Mayor Kenney said in a statement Monday. “Philadelphia is the City of Brotherly Love and Sisterly Affection. For this moniker to ring true, all our brothers and sisters — regardless of their background — must feel safe and welcome.

If you’re a Philadelphian who pays attention to the news, you know that’s a snort-worthy comment from Jim Kenney who’s built a political career telling suburbanites, Trump voters, and anyone else he deems deplorable to literally stay out of “his” city.

The comment also rings hollow as across town, also this week, the nation got to watch the social media video post of Pennsylvania State Representative Brian Simms as he bullied and harassed an elderly woman and a few high school age girls gathered to pray and peacefully protest abortion in front of a local Planned Parenthood.

He went further by offering $100 to anyone who would identify the three young girls as he shouted them down for being “white, pseudo-Christians.”

What you should know about Simms is what he wants you to first know about him. You can read it on his Twitter bio: “LGBTQ activist, State Representative, civil rights attorney, College Football Captain, Bearded, ?#RuPaulsDragRace fanatic, ?#LittleMermaidenthusiast.”

Yes, he’s a civil rights attorney.How’s that for irony?

Well, here’s an analogy for Representative Simms to help him understand what he’s done.Remember the part in “Little Mermaid” where the sea witch steals the mermaid’s voice? Our bearded, college football hero is the sea witch.The pro-life protesters are the mermaids.

I’d better be careful.That’s probably treading on sacred ground for this tough guy.

Perhaps I’ll just propose Representative Simms redirect his ire and concern for inclusivity, tolerance, and respect elsewhere.Where he can really impact Philadelphia.Since our mayor won’t stand up to it, Representative – take your phone and your RuPaul swagger and head across town to the Muslim American Society Islamic Center.

Yell at those kids on video as you did the young women on a public sidewalk just for trying to save a life.Shame the young jihadists’ teachers for teaching them songs about murdering Jews.Go ahead, Mr. Simms.You’re on a roll!

And hey, while you’re there you can tell them all about your LGBTQ activism and how proud you are of your sexuality.The thing I hear about Islamists is – they love to celebrate alternative lifestyles with fun activities like stoning and rooftop shoving.It’s a hoot!

Or maybe you could talk to them about women forced to cover themselves head to toe with only slits for eyes?Genital mutilation? How about the severe beatings they take for even talking to another man who’s not their husband.

Yes, Mr. Simms now’s your chance.Don’t waste your time on praying schoolgirls in front of an abortion clinic.Go bigger and storm into the Islamic Center in North Philadelphia and show ‘em just how butch you are when it comes to inclusiveness and false religious teaching.

I’ve got your back.

I’d pay good money to see this putz in a debate of sorts, with Camille Paglia.

Chris Stigall, how we miss you in the mornings on WPHT1210am.

You need to come back home, brother...

what is wrong with this new generation of Dem politicians

4 posted on 05/09/2019 7:15:51 AM PDT by bob_esb
[ Post Reply | Private Reply | To 3 | View Replies]
To: Kaslin
If you’re a Philadelphian who pays attention to the news, you know that’s a snort-worthy comment from Jim Kenney who’s built a political career telling suburbanites, Trump voters, and anyone else he deems deplorable to literally stay out of “his” city.

Take your damn city and get out of our fair Commonwealth. Neighboring Camden, NJ would be glad to welcome you to their $#*+hole of a state. Just leave the area around Independence Hall, Ben Franklin's grave and the Liberty Bell for us Americans.

Brave liberals are orgasmic at the opportunity to browbeat, threaten and harrass the most vulnerable amoung us. Yes, so “brave.”

6 posted on 05/09/2019 7:45:42 AM PDT by subterfuge (RIP T.P.)
[ Post Reply | Private Reply | To 1 | View Replies]
To: Kaslin
Ross said Archer told police he believed the department defends laws that are contrary to Islam. Capt. James Clark, head of the homicide unit and also present at the press event, said Archer told investigators: "I follow Allah. I pledge my allegiance to the Islamic State and that's why I did what I did."

8 posted on 05/09/2019 8:20:37 AM PDT by Sergio (An object at rest cannot be stopped! - The Evil Midnight Bomber What Bombs at Midnight)
[ Post Reply | Private Reply | To 7 | View Replies]
To: NFHale
I wonder why Stigall did not get renewed: can't imagine that his ratings were all that bad.

He did seem to take a lot of time off: maybe that was it.

In the name of Allah I swear to kill all the Democrats I meet!

(Now watch as liberal heads explode when none of them can bring themselves to call the FBI about this.)