Here's the Complete Schedule for the TCM's 75th Anniversary of D-Day Series
military.com ^ | May 2, 2019 | James Barber 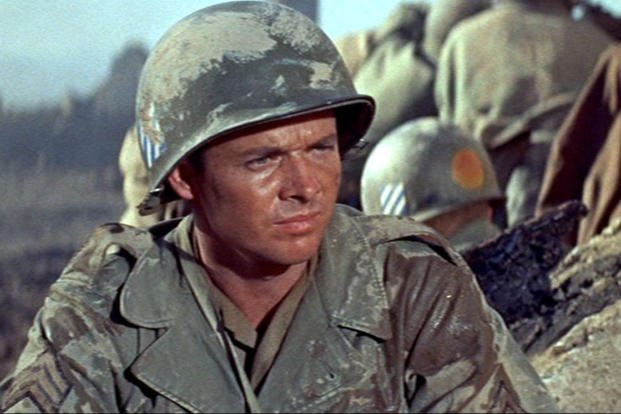 Medal of Honor recipient Audie Murphy plays himself in “To Hell and Back.” (Universal)

Never Surrender: WWII in the Movies is a 75-movie series airing on Turner Classic Movies in recognition of the 75th anniversary of D-Day. The series runs on Thursdays in May and June.

TCM host Ben Mankiewicz visited the National World War II Museum in New Orleans to film the channel’s trademark introductions with the museum’s staff and noted WWII historian Lynne Olson. He also talked with us about the series and TCM’s unique relationship with its viewers.

The month of May is devoted to movies about life and sacrifice on the homefront. June features the WWII combat movies that we know and love and quite a few obscure titles that deserve a first (or second) look.

TOPICS: Extended News; News/Current Events
KEYWORDS: dday; godsgravesglyphs; movies; tcm; worldwareleven; worldwartwo; wwii Navigation: use the links below to view more comments.
first 1-20, 21-40, 41-60, 61-77 next last
For those of us who had Dads (or Moms) who served America in the U.S. Armed Forces during WWII, these movies may have a bit more of a nostalgic draw.

Looking forward to watching some.

My Dad served in the Army in the Pacific during WWII.

I’d like to see the same attention paid to Midway, the battle that broke Japan’s back. The story behind it is much more interesting than D-Day. The best D-Day book I have is from the German perspective.

My Dad was wounded in North Africa, did recupe in London, was sent to D-Day and was wounded in the battle of the Bulge. He then got busted back to private for shooting a fish he was landing from a boat in the Bering Sea.

The best D-Day book I have is from the German perspective.


If you look on YouTube, you can find “Die Deutsche Wochenschau”—Nazi newsreels, many with English subtitles. If you look around the middle of 1944, you’ll run into their view of D-Day as was reported to the German people. I remember one showing American GIs captured. The narrator points out how Americans are a mongrel people and gum chewing really seemed to set them off.


As you get deeper into 1944, the tone changes. “Our brave boys are shifting moving to more defensible positions”, i.e. retreating. Then, in a later broadcast Goebbels says something to the effect “you won’t get into Aachen as easily as you did into Paris or Bucharest”, which I’m sure told the discerning listener that at this point the war was pretty much lost.

TCM does a good job of showing them when relevant.

Thanks. I will load that up.
My favorite D-Day anecdote is
when the US allowed a captured
German officer to watch some
of the landing operations at
Normandy Beach. Seeing so
much war material landing, the
officer asked, “Where are
the horses?”

I watched about a 20 minute video on Midway. It truly was the turning point in the war in the Pacific. Although the Japanese lost four carriers and a lot of pilots and air crew, they still had a formidable navy. Still had adequate pilots and carriers.

I think Midway (and to a lesser extent, Coral Sea) was more psychological than anything. The Japanese realized they were not invincible.

The Americans were still a long way from the massive Navy we had in 1945.

Seeing so much war material landing, the officer asked, “Where are
the horses?”


There’s a scene in one of the last episodes of Band of Brothers where our troops are riding in trucks on an autobahn and German POWs are walking or riding in horse-drawn carts going the other way and a GI calls out “What were you thinking? You never heard of General Motors or Ford?”

Thanks for posting. My Dad and Uncle served in WWII....Army and Air Corps.

TCM is my fave channel!

And....I just watch The Caine Mutiny, on TCM, the other night.

Midway bought us near naval parity with the Japanese.

It was or fist big win and did have a huge psychological effect on both sides.

But it was Guadalcanal that broke the Japanese’s back.

All their remaining offensive ground forces, scrapped up from all over the Pacific were fed into that killing ground and destroyed.

The Japanese also lost a lot of aircraft in the contest over the Solomon Islands (which Guadalcanal is one).

And it gave our Navy time to pull its head out and get shed of some peacetime nonsense re: tactics and ship management (like in one night battle around the island, each ship’s captain had his own navigation habit. Some used the north star, some magnetic north, some map north. and the maneuvers were a mess).

This was sealed up for 75 years after the Battle of Midway:

Unsealed 75 years after the Battle of Midway: New details of an alarming WWII press leak!: June 5, 2017

Six months after the Japanese attack on Pearl Harbor, the June 7, 1942, edition of the Chicago Sunday Tribune, trumpeted news of a stunning American victory over a Japanese armada at the Battle of Midway.

“Jap Fleet Smashed by U.S.; 2 Carriers Sunk at Midway: 13 to 15 Nippon Ships Hit; Pacific Battle Rages,” the front-page headlines read. And in the center of the page, an intriguing side story: “Navy Had Word of Jap Plan to Strike at Sea.”

It was a fascinating, and detailed, description of much of what American intelligence knew beforehand of the enemy’s fleet and plans. Indeed, it was too detailed.

The report — 14 paragraphs long — suggested a secret U.S. intelligence coup, and it became one of the biggest and potentially damaging news leaks of World War II.

The leak hinted that the United States had cracked a Japanese communications code, sparking fury in the Navy and the administration of President Franklin D. Roosevelt, and starting an “espionage” probe by the FBI. It also led to a sensitive grand jury investigation for which testimony would be sealed for more than seven decades.

Excerpted, for full story go to link below:

12 posted on 05/04/2019 11:51:15 AM PDT by Grampa Dave ( One of President TrumpÂ’s Clinging, Deploreable, Low IQ, Dreg supporters helping to MAGA!))
[ Post Reply | Private Reply | To 2 | View Replies]
To: PROCON
Might be well to note that the generation of children who were in grade school from 1939 to 1945 are now in their 80's/90's--with their heads full of memories of growing up in rural and city areas where almost every household had members in the military services.

A budding Brokaw might do well to put together a book recording their memories of Pearl Harbor attack through August 1945, where, as children, they were impacted by absence/loss of parents, siblings, and other family members, as well as the community war efforts, the school efforts, and the love of country displayed in every community in America.

Ben Mankiewicz Is a scumbag.

It’s my favorite too, that and some of the ‘true crime’ channels.

While I do adore Myrna Loy, I refuse to watch “The Best Years of Our Life” again.

It stopped their expansion. The “turning point” was that we knew we could beat them. We knew they would not expand further. We knew we could turn our attention to Europe, and at the same time, we had the time to tap the resources of North America that would eventually push the Japanese back—on our schedule.

It was our turning point—and it had little to do with their military.

Why? What have I missed about Myrna Loy, or that movie? Thanks.

MacMurray was so good in that role. A real weak spined P.O.S.

After watching him lie in the court martial I could not watch "My Three Sons" years later with out wanting to punch the SOB out.

BTW, one of the wealthiest actors of his era and after. He had the foresight to buy land in and around Pasadena when it was still farm country.

He was deployed to a small cargo ship in that had a hold converted to an operating theatre. Every time he saw "Mr Rogers" he'd laugh out loud as it brought back memories of the down times between incoming evacs.

The laughs stopped in 1950 when he was deployed to Korea as a Navy doc assigned to the Marines in Chosin. Never talked about it.