Obama, who has remained active in politics since departing office more than two years ago, has offered Biden more than he has to the rest of the Democratic field, as the 19 other candidates are all vying for attention, support, and anything to boost their campaigns.

TOPICS: Politics/Elections
KEYWORDS: 2020primaries; biden; biden2020; bidenobama; obama; obamabiden Navigation: use the links below to view more comments.
first 1-20, 21-28 next last
Between no endorsement from Obama and the fact that the #metoo harpies were set loose on him even before he announced his candidacy, it's pretty clear that the DNC power brokers do not want Biden to be their nominee. Since much of the news media just spouts what the Democrats want the public to hear, there would have been no complaints about touchy-feely Joe if they weren't ready to throw him and his 2020 campaign under the bus.

The Democrat higher-ups have decided that they want a female and/or "minority" nominee, so too old, too male, too white Joe needs to go. The question is, who does that leave them with? Will the DNC throw everything they have behind Kamala Harris, or is there some 11th hour candidate who's being groomed to come forward and save the day by checking off all the right grievance boxes?

What a great guy. Obama is waiting to see if the Creepy Uncle Joe stuff hurts Biden, and to see if the loony “coalition of the ascendant” freak show is viable. Obama just sent a pretty strong signal to the other candidates to make a play for his support/praise. It’s all about him as usual.

It’s too early. Why stick your neck out for someone that might fail? It’ll make you look insignificant and that’s the last thing Obama would want.

He’ll wait to see if Joe gains momentum. Then Obama can speak up. How can he not endorse his former VP? Unless of course, as you day, the DNC has already cut a deal. 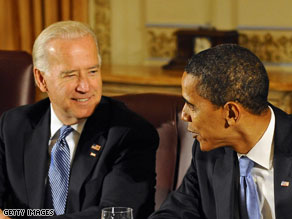 Ha-if the worst and most corrupt President in US history won’t even endorse his own VP, what does that tell you?

What no kiss of death?

6 posted on 04/25/2019 6:42:06 AM PDT by DungeonMaster (Prov 24: Do not fret because of evildoers. Do not associate with those given to change.)
[ Post Reply | Private Reply | To 1 | View Replies]
To: TangledUpInBlue
How can he not endorse his former VP? Unless of course, as you day, the DNC has already cut a deal

All of the writing on the wall indicates that the DNC doesn't want a white male nominee. It will be interesting to see what strategy they use to leave Joe out to dry. Will it be through not so benign neglect (Obama's non-endorsement), more #metoo hysteria, or just more digging up of Joe's more politically moderate voting record from 20-30 years ago?

It seems that “clean and articulate” doesn’t count for much.

There is also a custom among former Presidents to not speak ill of their successor.

He has some issues. Voted for the Iraq War. Voted to de-regulate Wall Street. Voted for DOMA. There’s lots there that they’ll hammer him with.

And I think you’re right. Before ANY of them announced, I always believed, and still do, that it will be Kamala. I agree they don’t want an old white guy so that leaves Joe and Bernie out. And even if Kamala loses, it sets her up again nicely in 2024.

He should be jumping up and down for Joe. He is the best chance he has to get pardoned from jail. Ungrateful little putz.

11 posted on 04/25/2019 6:54:52 AM PDT by magua (Because itÂ’s being reported that a lot of this started in 2015.)
[ Post Reply | Private Reply | To 8 | View Replies]
To: ek_hornbeck
Between no endorsement from Obama and the fact that the #metoo harpies were set loose on him even before he announced his candidacy, it's pretty clear that the DNC power brokers do not want Biden to be their nominee.

Well, no. It's a test. If the guy proves himself, he'll have support. If he doesn't they'll pick somebody else.

Will the DNC throw everything they have behind Kamala Harris?

Why? She's a demonstrably weaker candidate than Biden or Sanders. She's not experienced. She's not prepared. She's not likable. I don't see Blacks or women singing her praises or lining up to endorse her. Even rich California donors aren't in her pocket.

Candidates are circulating a lot of stuff against each other, but if there are over 20 candidates and you are some kind of power broker, you probably don't want to show your hand just yet. You want to see who will screw up.

BBC is saying Joe already won ,LOL I think they’re getting that tingle up their legs ,LOL

This is where we disagree. You seem to think that primaries are decided from the bottom up. I'm convinced that in most cases they're decided from the top down: i.e. the DNC and RNC anoint a candidate of choice and perhaps an acceptable pinch hitter, and then pull all the stops to make sure those candidates win - money, press coverage, ads etc. Most of the time it works - Hillary was the nominee in 2016, as expected. The same with Dole in 1996, Gore and Bush in 2000, McCain in 2008, Romney in 2012, etc. Trump pushing aside Jeb (and pinch-hitter Rubio) was practically a one-time anomaly.

Why? [Harris is] a demonstrably weaker candidate than Biden or Sanders. She's not experienced. She's not prepared. She's not likable. I don't see Blacks or women singing her praises or lining up to endorse her. Even rich California donors aren't in her pocket

The current pool of candidates creates a real problem for Democrats. They don't want Bernie or Warren because their economic policies will alienate big donors from Wall Street and Silicon Valley. At the same time, Sanders is an old white male who isn't "woke" enough for the activist base. This leaves them with weak candidates like Harris, along with even weaker flavors of the month like O'Rourke and Buttigieg. This is why I think that they're either in a complete panic now, or working behind the scenes on an 11th hour anointed candidate that fills in all of the right blanks.

So is that good for biden?

I think Obama has done enough for Biden. Biden would have ended his days as a vainglorious but mediocre and mendacious senator had Obama not elevated by making him his VEEP pick. With that, Joe actually advanced further than he was meant to. He needs to ride off into the sunset now.

It tells me he’s gonna be all-in for the Butt Boy from South Bend Over.

All of the writing on the wall indicates that the DNC doesn’t want a white male nominee.

I don’t believe so. They are just projecting that notion so the Dem base doesn’t get all wee wee’d up when the nom is a white male. They know they need a white male to beat POTUS. The Dem nom is going to be a white male. All the fawning over Mayor homo is partly because he still checks an identity politics “minority” box while being a white male.