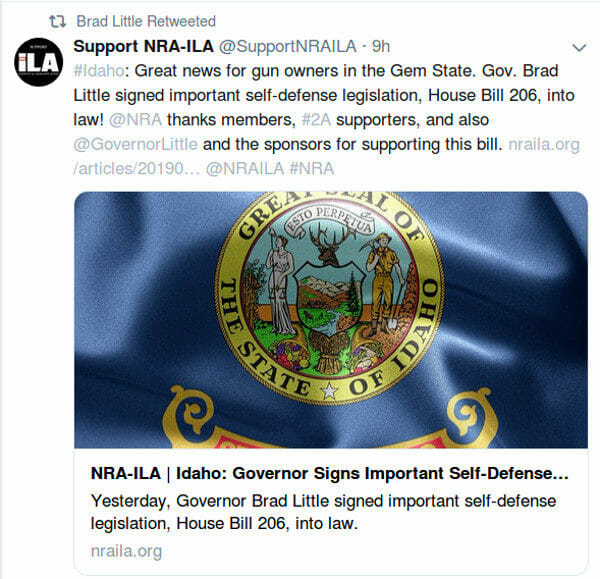 On 2 April, 2019, Governor Brad Little signed H 206 into law.  The bill restores Constitutional Carry for adults aged 18-20 carrying concealed guns in the incorporated areas of the State of Idaho.

Idaho became a member of the Constitutional Carry club in 2016. Governor “Butch” Otter signed that law on March 26 of that year.

The new law is a small, incremental change that is mostly symbolic. Idaho has been a mostly Constitutional Carry state for most of the last 100 years.  There were restrictions that most people ignored most of the time. The purpose of the restrictions was more symbolic than functional.

The restrictions informed people that infringements on Second Amendment rights were permissible; they loudly said the Bill of Rights was subject to legislative approval.

As more infringements were called for and passed in more legislatures, the resistance by Second Amendment supporters grew and grew. They organized. They formed their own communications networks and their own media. They became a powerful force in most state legislatures.

In Idaho, it is, the Idaho Second Amendment Alliance. They were the group that pushed and organized and strategized and voted and lobbied for years to pass Constitutional Carry in 2016.

Can under 21 buy a handgun in Idaho? Of course, you dont need to buy one to have one to carry.

This seams like a welcome spiking of the ball to the 2016 Constitutional carry law.

Enjoy your rights! You could live in NJ like me where the 2A is abolished.

For more commentary on this, some interesting:

The Constitution never specified an age in the 2nd. Amendment; in those days kids had guns.

“Can under 21 buy a handgun in Idaho?”
And still be on mommy’s insurance until the child turns 26!
Damn that obummer turd screwed this country but good!

my local, he’s a Life Member and soon to be running for county judge...

The Schuyler County legislature will vote at its Monday, April 8th meeting whether to join a constitutional challenge to a New York City law that could have broad implications for the state’s gun control measures.

The proposed resolution, which has passed both the county’s management and finance committee and its legislative resolution review committee, authorizes County Attorney Steven Getman to “render aid, where possible and practicable, to the various states listed as Amicus Curiae in the pending United States Supreme Court case of the New York Rifle and Pistol Association, Inc. et. al. v. City of New York, State of New York et. al.”

Those states have joined the New York Rifle and Pistol Association in arguing that New York City’s general prohibition on transporting even licensed, locked and unloaded handguns outside the city is unconstitutional, in that it violates the right to travel, interstate commerce, and the Second Amendment right to keep and bear arms.

They also argue that the Second Circuit Federal Court of Appeals, which covers New York, applied an incorrect standard in upholding the law. The appeals court, the plaintiffs argue, erred by failing to subject to the law to a “strict scrutiny” test.

“Strict scrutiny is the highest standard of review a court may use to evaluate the constitutionality of governmental action,” Getman explained. “It is often applied when a law infringes upon a fundamental right or involves a suspect classification.”

“Under that test, a law must further a compelling governmental interest, and must be narrowly tailored to achieve that interest.”

According to Getman, this is the first significant Second Amendment case the Supreme Court will hear since ruling in District of Columbia v. Heller (2008) that the Constitution protects an individual right to keep and bear arms, and further that this right applies against the states as well as the federal government, in McDonald v. Chicago (2010).

The New York State Rifle and Pistol Association challenged the city’s ban on taking a licensed handgun out of the licensee’s home except to a gun range within the city. The Second Circuit upheld the ban based on “intermediate scrutiny,” even though that standard requires that a restriction actually works to achieve a legitimate goal. Under the law, a city resident licensed to possess a handgun cannot transport their handgun to a weekend second home (even for self-defense), to another county to participate in a shooting competition, or even to a neighboring city for target practice. This, opponents argue, amounts to requiring a handgun owner to leave a firearm in a vacant house in the city while traveling, where it is more susceptible to burglary. They further argue that the city was unable to explain how a legal gun owner inflicts any risk on society when transporting a firearm outside the city, but not when transporting the identical firearm under identical conditions by identical means within the city itself.

How the Supreme Court rules could have broad implications for Schuyler County residents in terms of what sort of gun control measures the state might impose going forward, Getman noted. In recent years, Governor Andrew Cuomo has been a vocal advocate for increased firearm restrictions.

This is not the first time that the Schuyler County legislature has weighed in against Cuomo’s strict gun control laws. In 2013, the legislature passed several resolutions opposing the controversial SAFE act, arguing that the law violated the Second Amendment and created an unfunded mandate on the counties.

If the county joins the action, it would be at no cost to the county, the resolution notes.

Schuyler County is not the first county in New York to join the amicus filing. As of Wednesday (April 3), the following counties are known to have passed resolutions supporting the law’s challenge on Second Amendment grounds: Cortland, St. Lawrence, In addition, the following upstate counties are currently considering joining the action: Steuben, Montgomery, Lewis, Tioga, Chemung, Schenectady and Jefferson.

The current resolution was sponsored at management and finance by legislator Phil Barnes (R), District VI, Town of Dix.

Federal law prohibits anyone under 21 from buying a handgun from an FFL. Private transfers are another matter entirely.

IIRC the Age BS was part of the gca68 that was done after bobby kennedy got whacked by that fun loving sirhasirhanalibabbarahmadingdong guy.