You’re A Sucker For Not Believing That The System Is Rigged
Townhall.com ^ | March 28, 2019 | Kurt Schlichter

Imagine you spent two years completely screwing up at your job, I mean not merely getting every single thing wrong but loudly, proudly getting in everyone else’s face about how right you are. You’d get fired, terminated, 86’d, and Schiff-canned. But not the mainstream media. The media hacks failed for two years-plus, nonstop and without equivocation, but are they ever going to be held to account? No, they’re just going to gather in a big circle and Pulitzer each other.

Imagine you committed a racial hate crime where you falsely accused people who didn’t look or think like you of a horrible atrocity, and that you’d have gladly picked some poor saps with the wrong skin tone out of a line-up and sent them to prison for decades given the chance. Now imagine the two half-wits you hired to help you managed to get caught on video buying their stereotype get-up and spilled it all to the fuzz, though the fact you paid them with a check – because you’re a criminal mastermind – was already enough to get a grand jury to indict your sorry AOC. Now, what are the chances the DA is going to transform your 16 felony counts into a $10K fine and a couple days community servicing? Your chances of said outcome are poor. They are poor because your pals are neither Mrs. Obama or Willie Brown’s gal pal.

Now imagine that you studied really hard while the rich kids partied and smoked dope and splattered water on you by running their BMWs through puddles as you walked home from high school. Imagine your last name is “Chang,” or that your dad is a soldier and not a hedge fund manager, or that your mom is a waitress and not a TV bimbo. Now imagine how you feel when Durwood Richguy IV gets admitted to Harvard when he can’t count past 10 with his Gucci loafers on and you get slotted on a waiting list for Gumbo State.

Imagine you handled classified information and you took it home and put it on your iPad. Do you think the FBI would be super-concerned with your feels about it and give you a pass, like Felonia Milhous von Pantsuit got from Jim Comey, or would you be bunking with Michael Cohen? And speaking of that Looming Doofus, if you lied under oath in front of Congress, do you think you’d be free to wander the country, posting stupid tweets of yourself staring at trees and beaches?

Yeah, sure, that would totally happen.

The American dream has morphed into the American grift. And we normal people are the marks.

Let’s stop pretending. Let’s stop accepting the ruling class’s lies. And let’s stop lying to ourselves. America has changed. There used to be one standard, one set of laws, one set of rules. Now, there are two.

The one set of rules for normal people is designed to jam us up, to keep us down, to ensure that the power of the powerful never gets challenged.

And the one set of rules for the elite can be summed up like this: There are no rules.

Why do you think our elite is so eager to pass new laws and regulations? Is it because normal people like you and me are running wild in the streets? No, of course not. They don’t want to regulate political campaigns to make sure elections are fair. They want to regulate them so they will always win and we never will again. They don’t want a Green New Deal because they care about the weather in 2219, but because they want to take our power and our money for themselves. They don’t want to ban our guns because we’re dangerous to other Americans but because, armed and ready to defend our rights, we’re dangerous to their power.

Do you, even for a second, think any of the rules, regulations, statutes or laws they propose are even going to be applied to them? Do you see the DOJ ever indicting some liberal Dem or some pliable submissivecon for “campaign finance violations?” We know the answer to that because Hillary is wandering around the woods, with a goblet of screw-top Chardonnay glass in her withered paw, free as a bird.

Do you see them giving up their SUVs and trudging to work on foot or riding in some greasy, stinky bus? Will they give up their air travel? How about their beef? Tofu veggie burgers are for peasants. And their minions will always have guns even as you are rendered disarmed and defenseless.

Our elite is not elite. Instead, it’s a bunch of bums who somehow got a little money and took the reins of power and are now shaking-down our great nation for every penny they can wring out of it. We owe them nothing – not respect, not gratitude and certainly not obedience.

If you still wonder how we got Trump, just look around you. He’s a cry for help, a scream against the injustice we’re surrounded by. This injustice is poison to our country. This injustice is what makes republics fall apart, when the worthless ruling class pushes its contempt in the people’s collective face so hard and for so long that the population finally screams “The hell with this!”

No local or state pols. No referendums or taxes or bonds.

For me, Trump is our last chance.

Mueller and now SDNY wanted/want to grind him to dust to make an example of his outsider status-making him a martyr-archetype to the American ideal.

I pray God they failed/fail and that he and his family and all those loyal to him are protected and prevail. 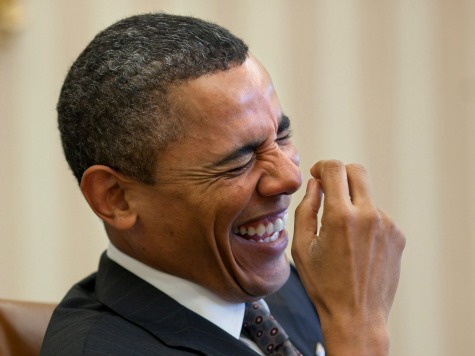 The Joke's on You, America.

Unfortunately, I don't think it is going to change anytime soon. When it does, it will not happen peacefully.

It is time for a purge. How that is carried out remains to be determined.

I disagree. It has started. Our President is one of a kind. He almost lost everything in his professional life and then built his empire and I am sure he learned a lot. Now everything he has learned is being put to use in getting this country turned around with us having his back. We are part of his TEAM. And since this Collusion crap is completed, he will be coming out strategically with both barrels. He is one awesome PRESIDENT!

You need to get involved locally. Trump can’t do it all from Washington, and won’t be there forever.

You don’t know how much I despise this arrogant POS

But the ‘journalists’ and media figureheads DID do their jobs. They were told what lines to deliver and the delivered them. They will get raises for performing well.

Good for you! Me? I gave up hope for Lent. It occurs to me that we have kept silent and waited patiently for “Claire Wolfe Day” when “they” will finally get what “they” deserve. Face it. It ain’t happening. The Revolution won’t be televised because it won’t happen. There isn’t going to be a day when the cities will turn into blazing death traps of anarchy. Our politicians would gleefully burn every rural community in America to save the cities they live in. Did any of you really need to get the message they are sending you with this Smollet thing? That they can do whatever the hell they want and there ain’t a damn thing you powerless nobodies can do about it? You missed the message they were sending with 3 years probation for Eric Clanton? We have watched as every head of FBI, DOJ, CIA, etc. conspired against a President of the US and in two years not one indictment and almost all of us still don’t get it? We are as bad as the libtards falling for the crap CNN sells. They thought they were going to get Impeachment. Is that any more retarded than thinking we could get Justice?

Certainly gives a lot of insight into why mobs kill the nobles that claim God gave them the right to rule them...

But what happens when Trumps two terms are up? I can’t see Pence getting elected because two many people hate Christians. Including many on FR.

What is amazing is that the yellow vests in France have 80%approval.

In America , I fear, we would never have this widespread support. The Obamamunists have predecided that whatever bad Obamamunism was doing, everyone would have to pay for its sins. Macron is not enjoying this rigged privilege.

A purge is long overdue. Kurt is spot on correct, but I fear that nothing will ever happen because our RINO’s are wimps. Look at 25D Sessions.

Hey, I I even wrote about doing 1/10th of what Hillary Clinton actually did, or James Clapper, or Obama, or any of the hundreds of deep state operatives, I would be serving life at hard labor.

We have patience, but it is really wearing thin.

The press tells you it is objective, BECAUSE IT IS NOT.

The justice system shouts it is fair and blind, BECAUSE IT IS NOT.

Congress claims to be working “for the people,” BECAUSE IT IS NOT.

NIH give 1.3 million dollar grant to some privileged person to study pampering cats to reduce hairballs. Only in America, the land of the gullible marks.

Buddy, you were not the only one.