He also said that Candace Owens inspired him the most.
How crazy is that? I would say that the Deep state had a role in writing the manifesto.

This is what I wrote on another thread about the shooting. I agree with you.

The SOB mentions Trump one time. So of course Trump will be blamed. He also writes that he was mostly inspired in his view point and the need to take action by Candace Owens. Now as far as I know Owens does not advocate for violence and never has. So that one comment raised a red-flag to me.

Candace is associated with Trump and pro 2nd Amendment. Signaling her out makes me believe this guy was coached by radical Leftists on what to write in his manifesto. Some of it is no doubt his own. But I think part of it is a mash up Aryan Nation/The Brotherhood talking points included as mis-direction. Sort of a Progressive’s bogeyman.

The mention of the US, especially the 2nd Amendment also tells of involvement of somebody here. And not a Conservative or even a more strident Right Winger. I almost hate to go here but to me it does have “Deep State” written all over it. 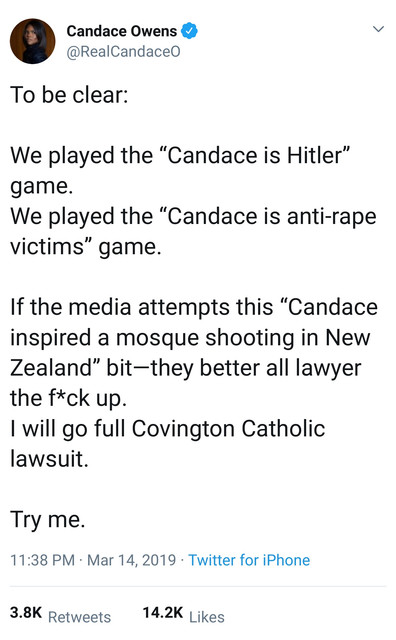 Candice Owens? He must not know she’s black with all the talk of White Nationalism.
Been reading a lot of Anarchists writings. None of them make sense.

EXACTLY! Candace Owens!!?? To random to even believe.

That part makes NO sense. He’s an Australian/British white supremacist but he lists Candace Owens—an American who isn’t even all THAT well-known here in the States—as his greatest inspiration?