NEW HAVEN, Conn., Feb. 25, 2019 /PRNewswire/ -- In just one month, Americans have made a sudden and dramatic shift away from the pro-choice position and toward a pro-life stance, according to a new Marist poll.

The shift was led by Democrats and those under 45 years old, according to a survey taken Feb.12-17 in the wake of efforts in several states to legalize abortion up until birth.

"Current proposals that promote late-term abortion have reset the landscape and language on abortion in a pronounced – and very measurable – way," said Barbara Carvalho, director of The Marist Poll.

In a substantial, double-digit shift, according to the poll, Americans are now as likely to identify as pro-life (47 percent) as pro-choice (47 percent). Just last month, a similar survey conducted by The Marist Poll found Americans more likely to identify as pro-choice than as pro-life by 17 percentage points (55 to 38 percent). Democrats moved in their pro-life identity from 20 percent to 34 percent.

"The recent legal changes to late-term abortion and the debate which followed have not gone unnoticed by the general public," said Carvalho. "In just one month, there has been a significant increase in the proportion of Americans who see themselves as pro-life and an equally notable decline in those who describe themselves as pro-choice."

At the same time, the survey found that opposition to late-term abortions is overwhelming. By about three to one (71 percent to 25 percent), Americans say abortion should be generally illegal during the third trimester. This majority includes 60 percent of Democrats, 72 percent of independents and 85 percent of Republicans.

In addition, the poll found that 80 percent of Americans would like abortion limited to – at most – the first three months of pregnancy -- an increase of five points since just last month. This includes 65 percent of those who identified as pro-choice, as well as strong majorities of Democrats (64 percent), Republicans (92 percent) and independents (83 percent).

The proportion overall has shown a consensus over time on the issue with three-quarters to eight-in-10 Americans supportive of restrictions on abortion. The 80 percent figure is, nevertheless, a significant increase since January – a noteworthy change in what has been a very stable measure.

"Arguments in favor of late-term abortion are simply not convincing the American people," said Carl Anderson, CEO of the Knights of Columbus, the organization that sponsored the survey. "If anything, since these proposals have been unveiled, people are moving noticeably in the pro-life direction. It is now clear that these radical policies are being pursued despite the opposition of the majority of Americans of both parties."

This survey of 1,008 adults was conducted Feb. 12 through Feb. 17, 2019 by The Marist Poll sponsored and funded in partnership with The Knights of Columbus. Adults 18 years of age and older residing in the United States were contacted on landline or mobile numbers and interviewed in English or Spanish by telephone using live interviewers. Telephone numbers were randomly selected based upon a list of telephone exchanges from throughout the nation. The exchanges were selected to ensure that each region was represented in proportion to its population. Assistance was provided by SSRS for data collection. The sample was balanced to reflect the 2017 American Community Survey 1-year estimates for age, gender, income, race, and region. Results are statistically significant within ±3.5 percentage points. MOE increases for subgroups.

“Current proposals that promote late-term abortion have reset the landscape and language on abortion in a pronounced – and very measurable – way,” said Barbara Carvalho, director of The Marist Poll.

I think this is exactly what’s going on. Some more moderate or centrist people are seeing the left go so far overboard on late term abortion, including letting the baby die after birth, that they are feeling revulsion.

The ugly display of Andrew Cuomo spiking the football on this issue, when New York passed their abortion law, may well have backfired on the left. Did they think it would help bring people towards their point of view?

This is the one issue on which Millenials do not appear to lean Left. I think they realize that all of them could have easily been aborted.

America's constitutional protections--all of them--came out of a philosophical foundation resting on the premise laid out Jefferson's simple statement.

Not to mention the equally ugly spectacle of Ralph Northam blathering on about birthing a live baby, “keeping it comfortable,” then deciding whether to murder it.

These people are ghouls, and if God is good, their party will suffer mightily for it.

It should put to rest some of this hand-wringing over America going to hell in a handbasket.

Just because the politicians do it doesn’t mean American follow.

In my opinion, the “pro-choice” versus “pro-life” dichotomy is vague and largely meaningless, because it may indeed depend on whatever marginal abortion-related issue has been loudly in the news recently.

This particular poll found that 61 percent of Americans support banning abortion after 20 weeks, and 68 percent oppose taxpayer funding of abortion.

But even that could probably be malleable when more factors are added to the question.

For example, a Hart Research survey commissioned by Planned Parenthood found that the same number of Americans would oppose a 20-week ban if a doctor determined the fetus isn’t viable, which happens several weeks later, or in cases of rape, incest or health issues.

So, when people consider the range of circumstances in which abortions would be made illegal under most 20-week abortion ban proposals, a majority of Americans oppose them.

The pro-choices all insist that just a tiny portion of the overall abortions are late term ones and most are done for medical and health reasons.

So, I’d really like to add one question in a poll to really gauge how Americans feel. Would those polled still support abortion if they include the factor of HEALTH of the mother in the question?

THAT remains to be seen.

Trump Quote on made in image of Holy God didn’t hurt.

This is the very reason why PP is scared as snot about the David Delaiden videos and have gotten their law lackeys to put them on ice.

The article doesn’t even discuss infanticide AFTER being born! That has to be a huge factor.

11 posted on 02/27/2019 1:08:10 PM PST by ProtectOurFreedom
[ Post Reply | Private Reply | To 1 | View Replies]
To: SeekAndFind
Defining candidates on their views of postpartum murder is one of our very best campaign issues going into the forthcoming election.

Should be on commercials and debate participants should bring it up (as the mods surely will not).

And, if a weaselly Dem tries to say that once a human is born then murder is off limits (which it, of course should be), then comes the question, at what point is the about-to-be born baby safe. 1 day before? 1 week?

“By an even wider margin (71 percent to 18 percent), Americans strongly oppose late-term abortion after 20 weeks.”

“In addition, the poll found that 80 percent of Americans would like abortion limited to – at most – the first three months of pregnancy”

Not a winning platform. I would begin SUPER Gluing this to EVERY DEMOCRAT.

If they showed the movie “unplanned” in schools almost everyone would be pro-life.

I thought we didn’t believe polls.

Although this poll is good news, I still have my doubts on this one.

“The pro-choices all insist that just a tiny portion of the overall abortions are late term ones and most are done for medical and health reasons.

Read an article a few days back written by a obstetrician that has delivered thousands of babies stating that need for a late term abortion for the health of the mother is virtually non-existent.

Any potential health issues would have arisen much earlier in the pregnancy.

Now if they’re only smart enough to vote in support of their newfound virtue - a very big if..... 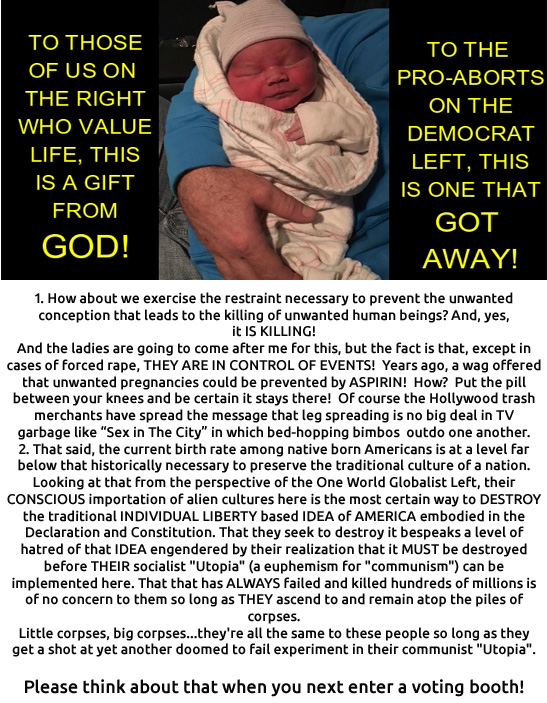