It’s not true, but if you ask Rep. Alexandria Ocasio-Cortez, D-N.Y., she’ll tell you conservatives don’t care about poor people. Ocasio-Cortez and her socialist cohorts such as Sen. Bernie Sanders, I-Vt., think any empathetic person has to support her laundry list of big government proposals — dubbed the “Green New Deal.” She’s called for nationalized healthcare, a federal jobs guarantee, and even “economic security” for those who are “unwilling to work.”

But for the poor, Ocasio-Cortez’s plan is rife with unintended consequences. The big-government platform pushed by the emerging socialist Left would do more to set the poorest Americans back, as its dysfunction extends beyond the usual dependency trap of modern welfare. Indeed, funding socialist programs this large would destroy our civil institutions and decimate private charity. After all, the roughly $93 trillion price tag on the "Green New Deal" would require unprecedented levels of taxation. Even Ocasio-Cortez’s ideal means of funding it, a 70 percent top marginal tax rate, would raise about $720 billion at most.

That’s less than 1 percent of her plan’s cost.

To understand why this socialist approach won’t work, you must remember how miserably the government’s anti-poverty efforts have fared to date. In his 1964 State of the Union, former President Lyndon Johnson declared “war on poverty.” At the time, poverty rates hovered around an embarrassing 19 percent, so Johnson promised to devote more resources to government assistance programs and various forms of welfare. Since then, taxpayers have spent around $22 trillion to fight poverty.

What do we have to show for it?

In recent decades, increased government spending has barely moved the needle when it comes to the poverty rate. It hovered around 15 percent in the 1980s, and has remained roughly the same ever since, even with trillions more spent to continue fighting...

“How socialism destroys private charity and hurts the poor”

I don’t give handouts to panhandlers that’s for sure. The government taxes me to take care of them. I donate only to local causes that don’t get money from the government. And never to United Way or Susan G Komen foundation.

We are being fleeced at the altar of “compassion”.

6 posted on 02/26/2019 10:18:34 AM PST by Opinionated Blowhard (When the people find that they can vote themselves money, that will herald the end of the republic.)
[ Post Reply | Private Reply | To 1 | View Replies]
To: E. Pluribus Unum
1-If the concern is low wages for the working class,

2-If the concern is helping those in poor, third world countries,

HELP THEM WHERE THEY ARE, we can't move 5.5 Billion people here.

3-If you believe stealing the private wealth of the top 1% will help the poor,

Just know that will run the gov't for 6 months and then you won't have the fruits of their hard work to exploit a second time.

4-If you think the purpose of gov't is to make life "fair" for everybody by penalizing hard work, ingenuity, and God given talent,

Then YOU ARE A TYRANT SEEKING TO DESTROY THIS COUNRY AND ALL PERSONAL FREEDOM!!

“At the time, poverty rates hovered around an embarrassing 19 percent, so Johnson promised to devote more resources to government assistance programs and various forms of welfare. Since then, taxpayers have spent around $22 trillion to fight poverty. What do we have to show for it? In recent decades, increased government spending has barely moved the needle when it comes to the poverty rate. It hovered around 15 percent in the 1980s, and has remained roughly the same ever since, even with trillions more spent to continue fighting...”

In response to Judas wanting to steal a gift to Christ under the guise of helping the poor, Jesus said, “The poor you have with you always.” (John 12:8) 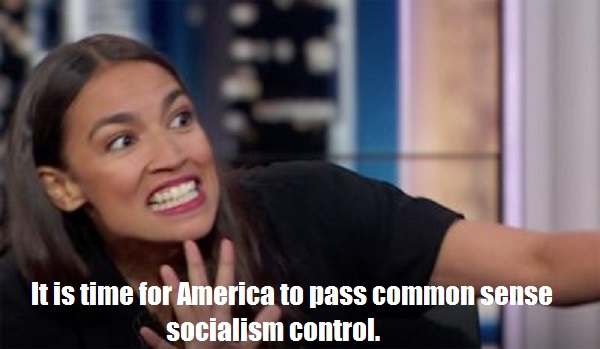 Capitalism: Person “A” sees a panhandler and gives him $5 so said panhandler can eat.

Socialism: Person “A” is taxed $20 which is used to offset costs to include salaries and benefits of federal employees in the new “feed-the-homeless” program, after which, the remaining $0.50 is provided to the panhandler.

This exactly depicts why socialism will never work. First of all, taxing the person $20 instead of the person giving $5 means the source of the money is gone much faster. The bulk of the tax goes for “overhead” & the least bit of it to the ones actually needing the help. One person directly helping another not only eliminates the middle man(who always takes his cut),but that one person helping always has a better view of who really needs the help;unlike the indiscriminate gov’t middle man. By the time the gov’t. subtracts their share, the poor panhandler doesn’t get enough to do him any good and the taxpayer is also poorer for the effort. LBJ may have meant well, but had an idiotic way of going about it. Also, those who are being heavily taxed may not have the means left after taxes to help the poor in any substantial way. The gov’t has already wasted the largest portion of what was meant to help the poor. By doing all this, they have not only NOT helped the poor, but have created even more of them.

You got it my FRiend.