President Trump derided rival billionaire Tom Steyer as a "wacky" and "crazed & stumbling lunatic" on Sunday, after Steyer -- who was one of the prominent liberals to receive a threatening suspicious package last week -- said he "absolutely was blaming" Trump for creating an atmosphere in which "anything can bubble up, and anything is bubbling up."

Steyer fired back quickly, writing that Trump's comment was "unthinkable ... in the midst of the horrible political violence."

The Twitter conflagration erupted after Steyer's wide-ranging interview with CNN's "State of the Union," in which the hedge fund manager called Trump "corrupt," and accused him of "the most abject dereliction of duty in the history of the country" by "willingly putting Americans in harm's way" because he has dismissed a major United Nations report on global climate change.

He is a traitor!!

Political violence ? So killing Jews is political according to this clown. Interesting statement.

When you’ve been stuned you become a luntic.

Go back to ripping off the taxpayers, Steyer, you POS

Funny, that's just the atmosphere I noticed following the 2000 election with the unrelenting and ceaselessly escalating provocations from the left ever since.

FU, Tom Steyer! No matter what propaganda you and your Progressive goons come up with, and no matter how successful you are at it, I will always know who started all this s#*t.

I remember the knock-out game. That bubbled up from somewhere.

Steyer proves that wealth does not mean intelligence or character.

The atmosphere was created solely by those who can’t psychologically handle the fact that we now have a patriotic President who puts America first.

He made his money as a hedge fund dirtbag oil manipulator. Now he leads the global warming’hoax. This vile and loathsome scumbag is reprehensible. 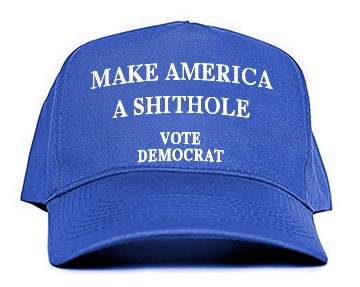 Thanks to Dick Bachert for this reality hat meme!

I really love how our Pres criticizes those who are deemed worthy- it should be a feather in their corrupt cap.

Being called out by him should be a badge of honour.

I really love how he takes it all on.....speaks his mind

and everyone should get used to it because that is how

I’m pretty sure Hitler was a global warming fanatic like Steyer. Wasn’t he vegetarian?

Yep Steyer is a lunatic
A really really rich lunatic

I heard him in tv recently denouncing rich white men. The cognitive dissonance alone would be enough to drive one mad

This would be Tom Steyer, the guy funding the Antifa terrorists who have now beaten scores of people including an old guy in a car in Portland?

Some day Rip Van Sessions might even charge him with conspiracy.

The President was only saying what most true American patriots were thinking.

Is Tom Steyer Helping the Planet or Himself? | Breitbart
https://www.breitbart.com/politics/2016/05/17/tom-steyer-helping-planet/
Having made his billions from his tenure atop Farallon Capital Management—much of it from coal projects around the world—Steyer apparently had an environmental epiphany and now wants to atone for his past sins by trying to save the planet from manmade climate change.

In 2004, Steyer was on the receiving end of left-wing criticism when student activists at Yale began investigating the methods Steyer used to amass his fortune, seeking disclosure of private equity at universities. Over the past decade, Farallon has become the pre-eminent financer of coal transactions in Asia and Australia, allowing him to accumulate a $1.6 billion net worth. The students formed a group called UnFarallon.info, a repository of negative news on Tom Steyer covering what the site identified as hypocrisy in many his investments. The site revealed Steyer has had direct, personal involvement in assembling a portfolio of strategic investments in overseas coal mines and coal-fired power plants unprecedented in scale. These investment interests promote the exploitation of one of the largest sources of thermal coal in the world, an energy source that Steyer has repeatedly condemned as an environmental hazard. The financing provided by this fund has enabled coal producers to restructure and recapitalize, leading to significant expansion of thermal coal production.