Republican activists on Thursday released a video of Rep. Kyrsten Sinema, a centrist Democrat now running for an open Arizona U.S. Senate seat, advising liberal activists how to "stop your state from becoming like Arizona."

The surreptitious recording dates from 2011, after Arizona Republicans had passed SB1070, a controversial immigration law that led to nationwide boycotts and concern even among some Arizona Republicans that the Legislature had moved too far right. Those concerns led to a recall against the then-senate president Russell Pearce, whom Sinema blamed in her remarks for much of the discord.

But the talk also contains unusually partisan language from a candidate who is one of the more bipartisan votes in congress and who has fashioned herself as a nonpartisan problem-solver in the current senate campaign. In the speech, Sinema, of Tucson, also noted that schoolchildren are taught five "Cs" that represent Arizona and suggested adding a sixth: "Crazy."

Just another day in the life of a “centrist” democrat.

McSally for the win!

Russell Pearce is a great Conservative mind.( I’ve met the man, listened to his radio show and viewed his web site.) This is why the left went to great lengths to destroy him and finally succeeded in sending him to political Oblivion.

She has always been a FAR LEFT liberal... Calling Republicans CRAZY is just typical democrat projection.

She ONLY just moderated for this run for Flakes seat.

For a documented view of her “centrist Democrat” pose, go to www.keywiki.org and look up her page. The media apparently doesn’t want to know about her Communist Party USA and other radical groups affiliations over the past 20 years.

Freepers should and then past along the information to friends in Arizona.

This was all over FNC earlier tonight. ;-) 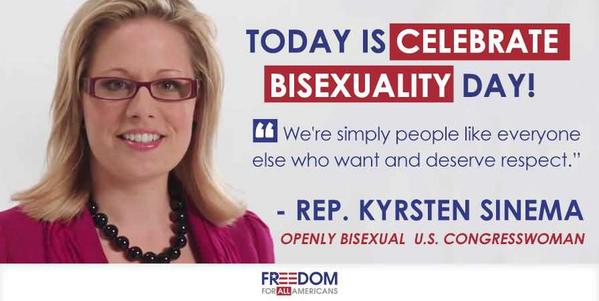 It's not a menu, Kyrsten.

The trisexual (She does animals too) Marxist Barbie. Press down on her pussyhat and she says, “Arizonans are crazy” and sticks out her tongue. Each one comes with a Rosie and Ellen T-shirt. Arizona’s newest freak show.

Excellent! McSally is going to win. Sinema was already fading in the polls and now this.

This should influence at least a small fraction of her supporters or undecided’s, that’s enough to move the election another 2-4 points sealing a victory for McSally.

“The trisexual (She does animals too) Marxist Barbie.”