While you and I were sleeping, the street artist Sabo was busy at work on the streets of San Francisco waging his private war against the excesses and duplicity of Silicon Valley.

You might remember his last campaign in New York, exposing the incestuous relationship between Zuckerberg and Schumer: #ZuckSchumer.

His new target is Google boss Sundar Pichai, a man last in the headlines for firing Google engineer James Damore for airing his views on diversity inside the business in his infamous Google memo. (Essentially, if you are straight, white or male you are at the back of the queue as far as this number-one search engine is concerned.)

Pichai is $380,000,000 richer this week after cashing in a small percentage of his stock options. It’s one of the largest payouts in history. No decent Conservative would protest against the accumulation of wealth, aspiration or the free market. Certainly not me. But given the true source of these profits, this figure does seem particularly obscene.

As Sabo rightly points out, Google users are being conned. We believe we are receiving a service for free, whereas in fact it is our private and personal information that is being packaged up and sold to the highest bidder. We are the product.

“I wanted to demonstrate how Google can pay Pichai $380,000,000 while not charging the public for its products. It seduces people into taking its free services without regard to the real price they are paying,” Sabo said.

He says most Google users are unaware of the permission they grant the company to spy on every keystroke they make and thereby develop profiles to sell to advertisers and others:

“Google’s pervasive surveillance tracks us more than Facebook does. If you think Facebook is bad, Google is far worse. It tracks you everywhere. Everything you’re doing. On your Android phone. On your computer. In your car when you’re using Waze. In your home. Your children. Google even tracks the barometric pressure so it knows what floor you’re on. All your movements. These small pieces of data create patterns of your personality and behavior, which Google sells to advertisers and others who target you.”

There is something deeply puritanical in the demeanour of these lords of Silicon Valley. They masquerade as holier than thou. Zuckerberg is a perfect example. They convey the sense that we minions should be relentlessly grateful to them, the masters of the tech universe, for bestowing upon us the magnificence of their brilliant minds.

In truth, they are the new gold diggers, and we are the resource being mined.

This has got to be a bit of an awkward start to your morning commute if you are a Google employee:

In the office Sundar Pichai is regarded as someone near deity. Here at the bus stop, he is mocked as a dodgy used-car salesman:

“The real price is each Google user’s individual privacy – their humanity stored on server farms to be sold,” he says.

This description makes me think of battery chickens, farmed without daylight, disposed of when their productivity falls. 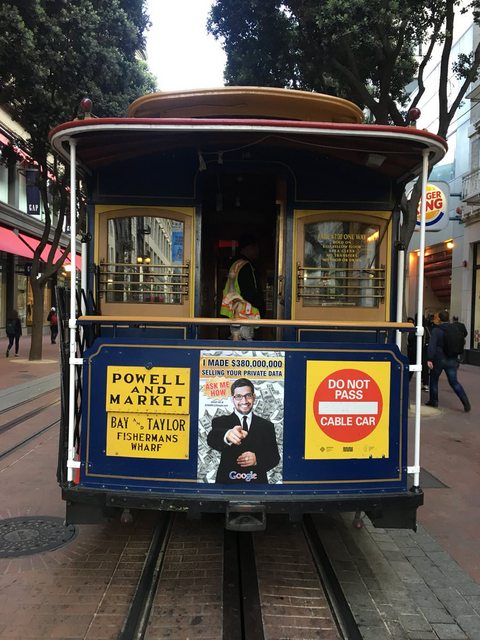 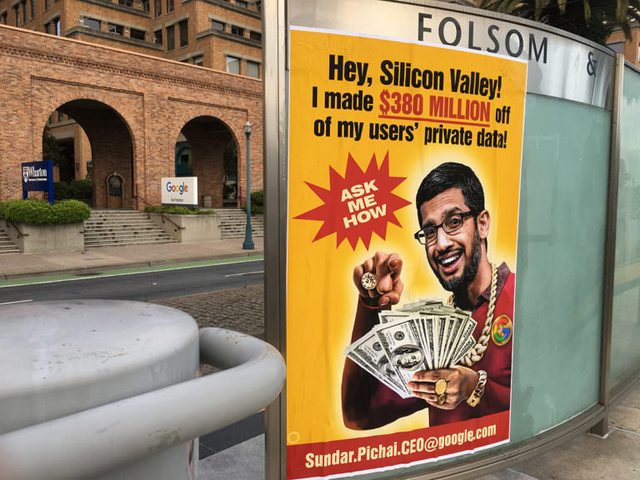 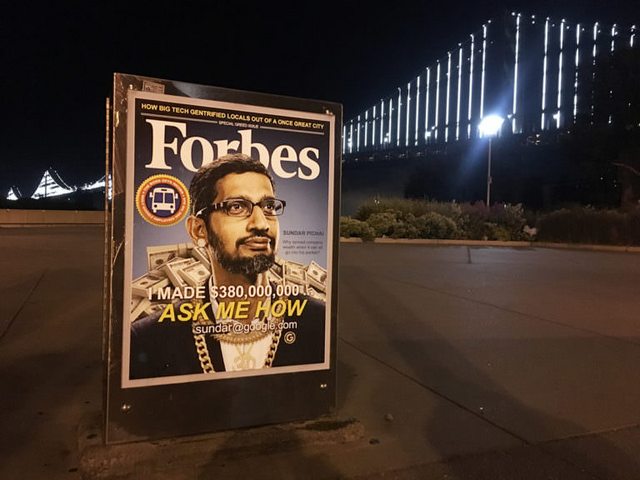 Aint it great that our ancestors fought and died so this jerk can show up here and cash in while trashing us?

To be fair, he’s doing it to literally every country, not just ours. Using an Android phone or tablet? Use GMail or search on Google? Browse using Chrome? You contributed to this guy selling off your data. It’s not limited to one country.