Tuesday’s Virginia election reignites talk of McAuliffe 2020 Presidential Bid: “Let’s Talk After I Get Out of Here” 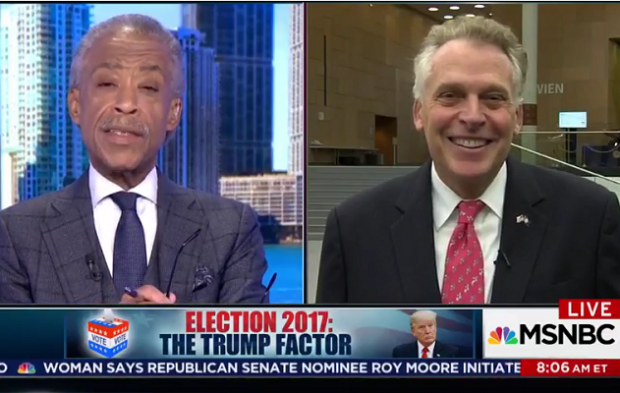 There has long been a lot of buzz about Virginia governor Terry McAuliffe (D) running for president in 2020.  In the wake of Tuesday’s strong showing for Democrats in Virginia, McAuliffe’s potential for a presidential bid in 2020 has improved.

In an interview with MSNBC’s Al Sharpton in which Sharpton asked about his 2020 plans, McAuliffe said “let’s talk after I get out of here.”

Virginia Gov. Terry McAuliffe, who has been stuck at the bottom of all the 2020 presidential polls, saw his political stock soar last week when his party scored huge election victories, cementing his legacy and giving him a platform to run on.

“Certainly Tuesday night was a triumph for McAuliffe, who looks like a potential if not likely presidential contender. His pitch is simple: ‘We took on Trump in Virginia and won,’” said Kyle Kondik, the managing editor of the University of Virginia’s Center for Politics Sabato Crystal Ball.

While an anti-Trump wave certainly helped Democratic Lt. Gov. Ralph Northam succeed McAuliffe, several insiders credit the governor with restoring a broken party organization and keeping many of his promises for the big win.

“I think he can make just as compelling a case as anybody at this point. He was consistently a popular governor, he followed through on a lot of his promises, he found a way to work with an overwhelmingly Republican General Assembly where he could and did battle when he needed to,” said one-time aide Mo Elleithee, the director of Georgetown University’s Institute of Politics and Policy at the McCourt School of Public Policy.

Quentin Kidd, director of the Wason Center for Public Policy at Christopher Newport University, added that in his polls, McAuliffe has remained popular and Virginians feel far better about their economy than the rest of the nation.

“That’s got to be good for any governor,” said Kidd, who added that he expects McAuliffe to run in 2020.

On MSNBC this morning, Sharpton asked McAuliffe for a “yes or no” answer to the question of whether he plans to run for president in 2020.

McAuliffe was interviewed by Al Sharpton in the wake of a successful election night for Democrats on Tuesday.

Democratic candidate Ralph Northam handily won the race to succeed him as governor. In addition to sweeps of the Attorney General and Lieutenant Governor races, the party made what McAuliffe called “historic” gains in the Virginia House of Delegates.

After McAuliffe asserted voters in Virginia had shown they were rejecting President Donald Trump’s agenda, Sharpton brought him up as a possible challenger to Trump in four years.

“Yes or no answer, because I’m out of time. You mention that Northam won, he’s succeeding you,” Sharpton said. “Will we see McAuliffe in 2020 on the list of possible Democratic candidates for president? Yes or no?”

“Reverend, I’m going to finish this job strong. Let’s talk after I get out of here,” McAuliffe said. “People are paying me to be governor, and that’s what I’m doing.”

“That was not a no,” Sharpton said.

If the Wicked Witch can’t get a rematch against President Trump, maybe she’ll get one of her stooges to be the nominee and then the Reverend Al can be his running mate. Trump would win in a 1984-style landslide.

they ain’t having no white dudes in the democrats LOL

I sure hope so, I hope that bastard never gets close to the White House.

McAwful was supposed to be Hillary’s veep.

So why was he passed over for the clown; Tim Kaine?

Now there’s a Democratic combination. One is liar, a con-artist, a race-pimp, race agitator, freeloading, self-promoting leftist extortionist. The other is Al Sharpton.

Whoah. Excellent. He is nothing but a fixer

Turned VA from purple to bluer than Wisconsin

President Trump, the man we voted for to correct these America-destroying entities, is on to him

Terry McAuliffe? That crook?!! He is the male Hillary if not worse.

If it doesn’t have melanin and/or a vajayjay it’s not gonna be the nominee.

President Punk should be in PRISON!!!!!

Terry boy ......... get some hot tar and go back to Syracuse and seal some driveways. That would make more sense than a 2020 Presidential run.

Mine too but I’m sure he’ll throw in. He’s been part of the Clinton money machine apparatchiks and would be a likely heir. His running mate? My bet would be Gillenbrnd..consolation prize for NY and Hillary livers.

If that arrogant, sleazy, snake oil salesman becomes president, then each and every one of us had better start acting out, just like the Trump-deranged freaks are doing now. I will bombard my Facebook “friends” with insults and derogatory terms every day, as I am subject to now.

Because they knew Clinton was going to lose. They knew she was a bad candidate. The Russian collusion story is all crap.

He reminds me of a PG Wodehouse gag “he was of such crookedness that he could hide behind a spiral staircase at will”.

17 posted on 11/13/2017 2:59:44 AM PST by Jimmy Valentine (DemocRATS - when they speak, they lie; when they are silent, they are stealing the American Dream)
[ Post Reply | Private Reply | To 1 | View Replies]
To: LibWhacker
Personally I don't think that the democrat party will ever again nominate an "old white guy". The party is now owned lock, stock, and barrel by the PC brigade. From now on every candidate will HAVE to be from some PC category (black, Hispanic, women, gay, transgender, Etc.) Hillary only got the nomination because she fit the women category (and had to still cheat because she was white).

So for all the talk of Biden and McAuliffe, they don't stand a snowballs chance....

The democrats see the position of president as symbolic. That’s why they push for a woman/minority. The real power is behind the thrown. The money people (white men) run the show, but they have the minorities/women to attract the gullible masses.

The despise Trump because he is a leader...not a puppet.