Hillary Clinton is desperately trying to disrupt the news cycle after a devastating bombshell report was published exposing her involvement in the sale of 20% of America’s Uranium to Russia after MILLIONS of dollars flowed to the Clinton Foundation.

As previously reported, the FBI had evidence that Russian nuclear industry officials were involved in bribery, kickbacks, extortion and money laundering in order to benefit Vladimir Putin prior to Obama admin handing over 20% of America’s Uranium to Russia, according to a devastating report by John Solomon via The Hill.

Who was right in the middle of it all? HILLARY CLINTON. MILLIONS of dollars flowed to the Clinton Foundation as our Uranium rights were sold to Russia while she was Secretary of State.

Late Monday evening Sean Hannity and Circa News’ Sara Carter hinted that a bombshell was going to drop Tuesday morning involving Russia, Hillary and an informant. In fact, Hannity said that fake news and Hillary ‘won’t be sleeping well tonight’.

Hillary KNEW that Tuesday was going to be the beginning of all hell breaking loose as the bombshell story was on the Drudge Report very early in the morning. Sean Hannity also posted it to his Twitter account further helping the story go viral. 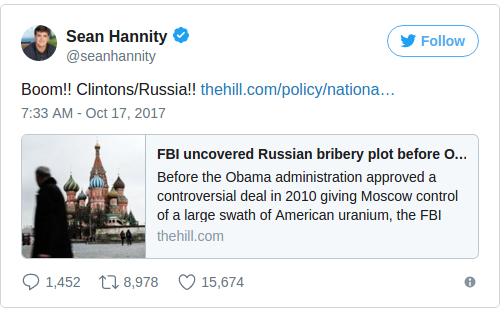 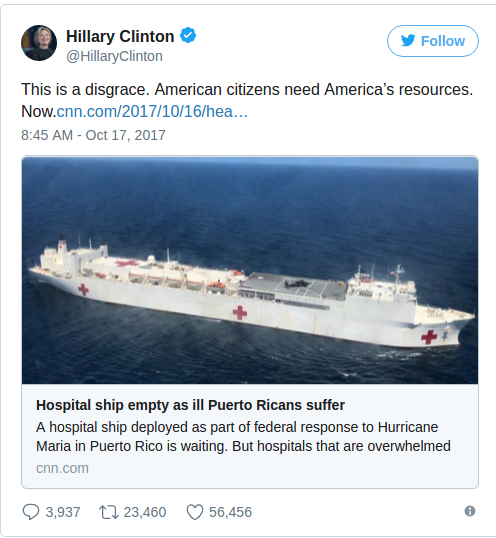 It appears that Hillary Clinton and her daughter Chelsea are coordinating on their talking points.

Chelsea tried the same desperate attempt to distract the news cycle on Monday after outlets were reporting on Hillary’s ill health and broken toe.

Chelsea tweeted, “Some perspective: Not worried about my mom’s broken toe. I am worried about people in Puerto Rico not having clean water, food or power.”

I knew about the Uranium 1 thing MONTHS AGO —maybe 4 months ago or more.

Don’t get me wrong, I AM happy this is getting more attention, but WHY the big final rush NOW..?

Wake me up when something happens.

We knew about hillary and the uranium deal and the money... and the clinton foundation... way before the election... way before Trump even announced he was running for President. It’s taken them a LONG time to use this and finally decide it is investigative material!

hillary+russia+uranium+$$$$ and it was ignored for over a year! Just destroy Trump...
I’m telling you the government is as corrupt as any other country that has fallen or been taken over by dictators...
Perhaps the difference is “we have our Constitution” and “we have our guns”... we don’t aim to see our country destroyed.. but they were close to it too close ..
IF NOT FOR TRUMP!

We knew about it.

Somebody at the FBI gave the actual documents to John Solomon and Sarah Carter. Have you been watching Hannity? Everybody was involved in this, Mueller, Rosenstein, McCabe, Holder and without a doubt Obama.

Maybe because the FBI says they were investigating it. Plus they have a witness and the evidence they need.

“As previously reported, the FBI had evidence that Russian nuclear industry officials were involved in bribery, kickbacks, extortion and money laundering in order to benefit Vladimir Putin prior to Obama admin handing over 20% of America’s Uranium to Russia, according to a devastating report by John Solomon via The Hill.”

If true, and I have no reason to doubt it, Hillary must be prosecuted as soon as possible along with her accomplices. Her open corruption and the government protection she has had must end and Trump is the only one capable of putting in motion a prosecution team that won’t be cooperative with the progressives of both parties.

Treason to us, but it will be a nothingburger.

Yes this is really hot.

This is where knowing who obama is and how he operated... speaks...
NOTHING.. and I do mean NOTHING went on that obama did not know about. He heard someone criticize him and he responded.. he was aware of everything... he spent his time making sure nothing went by him!

obama KNEW... so did our government... they knew and let it go.. they got something in return.. never doubt it!

our government was compromised .. corrupted... from one end to the other!

and it extended into Comey.

MEGA ping on Hillary corruption as Sec State, sold US uranium for donations to Clinton Foundation

For one, it was reported today by “The Hill” which is the ultimate insider Washington mainstream source, needless to say not a conservative source.

It’s all very sickening and for them to continue to get away with it is way beyond disgusting.

Approximately half way down...

"Secretary Clinton’s top vulnerability tested in this poll is the attack that claims as Secretary of State she signed off on a deal that gave the Russian government control over twenty percent of America's uranium production, after investors in the deal donated over one hundred and forty million dollars to the Clinton Foundation. Half of all likely voters (53%) are less likely to support Clinton after hearing that statement and 17% are much less likely to support her after that statement."

It was out there but WikiLeaks made it front and center.

I’m not surprised at all that Bammy’s Justice Dept., State and F.B.I. were involved. The SWAMP!

My conspiracy theory is that the Democrats want rid of Hillary. Then have been stories about the Dims being embarrassed by her new book and book tour.

And despite what Hillary says, she very well could run in 2020 which would be devastating to the Democrats.

The only to get rid of Hillary is to go nuclear on her. Expose a scandal so bad that even she can't walk away from it and make the Justice Department have to file charges against her. This Uranium deal just might be the ticket for the Clinton's downfall.

Anyway, that's my conspiracy theory and I'm sticking to it.