ABOARD A U.S. MILITARY AIRCRAFT — Defense Secretary Jim Mattis said Wednesday that the U.S. warning to Syria not to conduct a chemical attack on its own people appears to have been taken seriously by the Bashar Assad regime.

"They didn't do it," Mattis told reporters on his plane as they flew from Germany to Belgium. "It appears they took the warning seriously."

Mattis would not confirm or discuss on-the-record statements by a Pentagon spokesman that the U.S. had observed the movement of chemical munitions at the Shayrat airfield, the same airfield from which a Syrian warplane dropped deadly sarin nerve gas on civilians April 4. Navy warships launched a cruise missile attack on the air base later that week, which destroyed several aircraft.

But Mattis did say he believed that Syria has retained chemical weapons in other locations in the country in violation of an agreement to give up all its chemical stockpiles.

"I think that Assad's chemical program goes far beyond one airfield," Mattis said.

Asked about his level of confidence that Assad has backed off, Mattis said, "I'm not paid to have confidence in this sort of thing. I'm paid to be one of the sentinels that watches for it."

The White House on Monday night took the unusual step of warning the Assad regime ahead of a possible attack.

"As we have previously stated, the United States is in Syria to eliminate the Islamic State of Iraq and Syria. If, however, Mr. Assad conducts another mass murder attack using chemical weapons, he and his military will pay a heavy price."

On Tuesday, Navy Capt. Jeff Davis, a spokesman at the Pentagon, explained what drove the announcement.

"We had seen activity at Shayrat airfield, the same airfield we struck in April, that indicated active preparations for chemical weapons use," Davis said. Mattis met with his counterpart in Germany on Tuesday before heading to Brussels for a meeting of NATO defense ministers to discuss the plan for Afghanistan.

TOPICS: News/Current Events; Syria
KEYWORDS: chemical; mattis; syria; trump Navigation: use the links below to view more comments.
first 1-20, 21-36 next last
Nice to have a president who the world takes seriously again. May I say they even respect us and our military capabilities again?

Maybe they actually think they we will do what we say we are going to do. That we will chase evil despots to the corners of the globe.

I guess another chemical attack was imminent.
I’m glad Trump spoke up, if that was the case.

Not a good one to gloat about.

But yes, this is an example of better leadership.

Just Say No and mean it. No red lines needed!

6 posted on 06/28/2017 7:58:20 AM PDT by Grampa Dave (Limbaugh: Democratic Party Has Become Largest Hate Group In This Country! Go Trump MAGA!)
[ Post Reply | Private Reply | To 1 | View Replies]
To: johnk
Trump's message was foreceful and effective. Obammie on the other hand.... 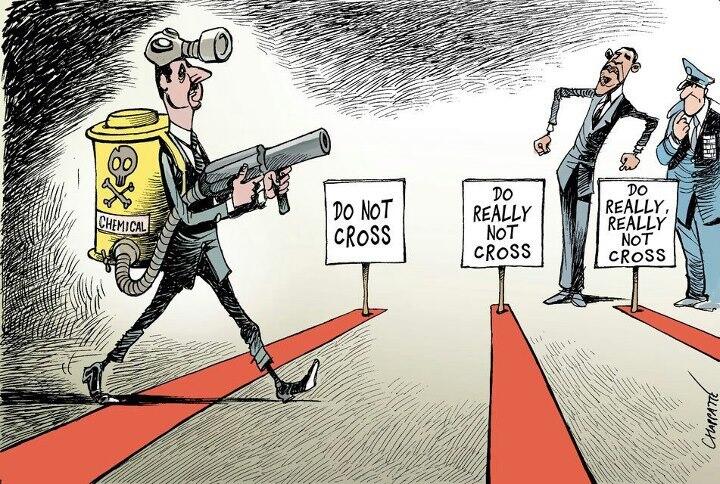 His weak position on Syria was yet another one of his legacy failures.

That we are back to being feared, is a good thing.

He was asked the question

There is no proof that the Syrian government had any intentions to do that.

There is no benefit to them of inviting a massive US attack.

Of course, there is no legal or constitutional justification to use US forces in Syria.

Waiting for the pro-ISIS closet Hillary supporters to show up and defend Hillary’s foreign policy, and accuse us of being “blame America first”. Besides the cartoonish, imbecilic “cut and run”, two of dumbest pro-war slogans.

Trump ran saying he was going to wipe out ISIS.

Now he is acting as the air force for ISIS in Syria.

Why is Trump acting as a continuation of the Soros/Obama ‘arab spring’ ?

So what this means is the corrupt press was attacking Trump for being the good guy.

Good for Trump, winning again. Also, there was a good report on all of this: http://www.businessinsider.com/syria-warning-trump-bashar-al-assad-2017-6

WH indeed scrambled to get the word out on Monday night; maybe not all agencies were in sync but they got there fast.

Nikie Haley made it perfectly clear Trumps warning to Assad was to Iran and Russia as well.....

Haley is promoting the neocon foreign policy of Hillary as well

Haley comes down on too many varied sides of issues..she is ‘not consistent’ and why I have difficulty supporting her. Seems to flow with the moment at hand..... But I don’t think she is going to last long in her position currently for that reason.....she just comes off as playing whatever role she’s called to play but without ‘her own convictions’.

On another note she has always struck me as a Political climber....likes to be seen and known among the powerful and to fit in somehow.