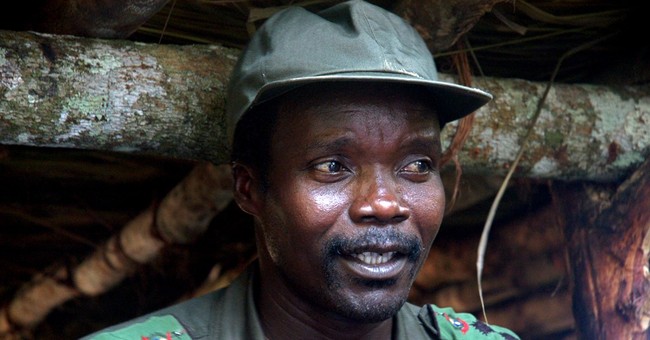 Kony is an evil man. Note the present tense: is, not was.

In the late 1980s, Kony took control of a movement whose goals linked the Acholi tribe's demands for autonomy in northern Uganda with a promise to govern Uganda according to the Ten Commandments.

But Joseph Kony lived by a different testament. In 2005, the International Criminal Court indicted him on charges of enslavement, sexual enslavement, rape, mutilation, mass murder, pillaging and other crimes against humanity.

In 2009, the U.S. Congress passed the LRA Disarmament and Northern Uganda Recovery Act. The U.S. had a low-level security assistance relationship with Uganda. Ugandan soldiers served with the African Union force fighting Islamist terrorists in Somalia. Obama mentioned the legislation when he ordered Green Berets to "advise and assist" the Ugandan Army's search for Kony. American soldiers would engage in combat only in self-defense. Americans would help coordinate intelligence gathering and handle logistics.

With the assets the American superpower could bring to the chase, Kony would surely be caught or killed.

It's 2017. Kony continues to evade capture. Last week, the U.S. military announced it would end its anti-Kony operation. Since 2011, it cost the U.S. somewhere between $600 million and $800 million.

In 2016, Uganda announced that it would end its own military's participation in the "hunt for Kony" operation. Ugandan officials have also said the LRA is no longer a threat to Ugandan territory. Most anti-Kony missions now take place in the CAR and Congo, where sporadic and vicious attacks on civilians by suspected LRA gangs continue to occur.

The Ugandan defense ministry recently estimated that fewer than 200 LRA fighters remain in the field.

How did Kony evade coalition forces?

The area in which Kony and his men roam is roughly comparable to the state of Texas in size. It slices through five desperately poor nations -- Congo, South Sudan, Sudan, the CAR and Uganda. Among these five nations, only Uganda's security forces can reasonably assert that they control their national territory.

Since the early 1990s, Uganda has accused Sudan of providing aid to the LRA. Kony may have a refuge in a remote corner of Sudan's Darfur region.

In March 2012, the human rights group Invisible Children released the video "Kony 2012." It became an instant internet hit and quickly racked up over 100 million views on YouTube and Vimeo.

The filmmakers packed their video with emotional and sensational appeals. They demanded that Kony be brought to justice by December 31, 2012, and definitely went all-in on arresting Kony. "...arresting Joseph Kony will prove that the world we live in has new rules. That the technology which has brought our planet together is allowing us to respond to the problems of our friends." See, we live in a new world, "the Facebook world."

Facebook, passionate rhetoric and emotional imagery don't stop mass murderers. Protecting civilians from mass murderers requires police and military power sufficient to deter the thugs and, when deterrence fails (for it will) to defeat them.