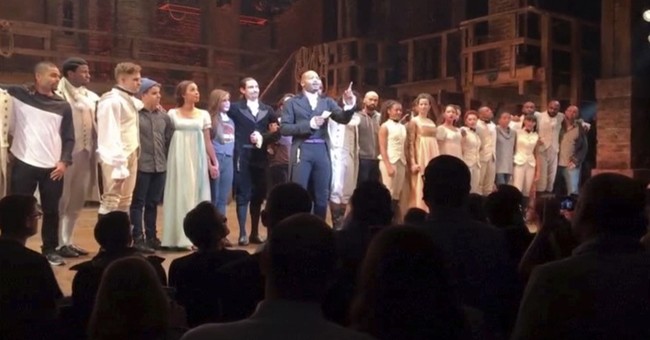 10) Salon.com: Singling out one liberal rag from legions of contemptuous, dishonest and nasty publications is difficult, but Salon deserves consideration because its website is a walking hate crime against white people. Just look at a tiny sliver of the articles Salon has run this year.

The invention of the white working class: The phrase of the year is racist hogwash

White fragility is real: 4 questions white people should ask themselves during discussions about race

We must shame dumb Trump fans: The white working class are not victims

What’s the difference between Salon and a bunch of pathetic Nazis sending out Holocaust memes and ranting about the “Jewish question?” Other than the fact that Salon probably pays better and they’re on different sides, not much.

Defining Quote: "....The intellectual deformities and disfigurements of the average Trump supporter should provoke universal disgust....Most white, working-class voters left the Democratic Party because they did not want to associate with racial minorities, and they did not want to support any candidate who was unwilling to prove – term by term – his contempt for black people. ...It is racial resentment, and little else, that motivates the Trump supporter. ...The best tactic of defeat for Donald Trump is to shame his supporters, not sympathize with them. If support for Trump, or anyone with such ignorance and hatred at the center of his vision for the United States, invites public embarrassment, supporters will begin to cower. If they cower, they lose." -- David Masciotra

9) Martin Sheen, Mike Farrell, Loretta Swit And The Other Celebrities Trying To Stop Trump Via Faithless Electors: This is not South America. After a candidate wins an election, we don’t start working on a coup to keep him from taking office. Yet, there was a full-on press by these celebrities and other prominent liberals like Michael Moore to get electors to try to throw the election to someone other than the man who won it. Setting aside the stupidity of setting this precedent (like Republicans wouldn’t try the same thing if it worked) and the very real possibility that bloodshed would result, how can any Americans be so arrogant as to attempt to overturn a legitimate election just because they don’t like the result?

Defining Quote: “Was anyone there watching this election? Because if there is one indisputable takeaway from 2016, it’s this: No one gives a West Wing box set what Martin Sheen thinks about politics.” – Ian Tuttle

8) The Cast Of Hamilton: Nobody, especially the mainstream former Republican governor of Indiana, deserves this kind of rudeness from the stage when he’s simply trying to watch a play in peace.

Vice-president elect Mike Pence, we welcome you and truly thank you for joining us at Hamilton American Musical. We sir, we are the diverse America who are alarmed and anxious that your new administration will not protect us, our planet, our children, our parents, or defend us and uphold our inalienable rights, sir. We truly hope that this show has inspired you to uphold our American values and to work on behalf of all of us.

What a bunch of….let’s just go with asshats, because I can’t use the words I’d like to use to describe these clowns.

Defining Quote: "When artists perform the venue becomes your home. The audience are your guests. It’s taking unfair advantage of someone who thought they were a protected guest in your home....A guy comes to a Broadway show for a relaxing night out. Instead he gets a lecture from the stage! Not a level playing field. It’s bullying. You don’t single out an audience member and embarrass him from the stage. A terrible precedent to set.” -- Steven Van Zandt

7) Lena Dunham/Amy Schumer: It was hard to make a call between Lena Dunham and Amy Schumer because they’re essentially the same person. They’re both condescending celebrities who are endlessly praised like they’re remarkable figures despite the fact they’re annoying, vacuous and they insist on taking off their clothes every other time they get in front of a camera despite the fact that science has yet to perfect a recipe for eye bleach.

Defining Quote #1: “Now that Amy Schumer is playing Barbie I'm more confident that my dream can come true of seeing Oprah Winfrey as the next Spiderman.” – Godfrey Elfwick

Defining Quote #2: “Now I can say that I still haven’t had an abortion, but I wish I had.” – Lena Dunham

6) Sally Kohn: CNN Commentator Sally Kohn is an obnoxious mixture of preachiness and almost comically ignorant pronouncements mixed with a whiff of fascism. She probably has some redeeming qualities that explain how she could have a career on TV, but I have no idea what they might be.

Defining Quote #1: “Hey @realDonaldTrump, many *progressive Muslims* -- the ones we should support in ideological fight against extremism -- believe in Sharia!!” – Sally Kohn

Defining Quote #2: “Feelings are valid. I’m never going to argue with people’s feelings. If they feel like they can no longer speak against positive social change, good,” Kohn said of conservatives who are silenced on college campuses. “They think [diversity] is dumbing down humanity, or the greatness and exceptionalism of America. I’m happy that’s under assault.” -- Sally Kohn

5) Rosie O'Donnell: Rosie O’Donnell is a nasty woman who rather famously ended up on the wrong side of a dispute with an even nastier real estate mogul from New York who gave her back every insult that she aimed at him times ten. After realizing she’d never beat Donald Trump, she apparently decided to move on to easier prey: his 10 year old son Barron. In a stunning display of bravery, Rosie suggested on Twitter that Barron might have autism. Rosie then ramped up her trolling of a 10 year old to epic levels by initially responding to calls for an apology with a poorly written poem that included the words, “but this autism subject – had nothing to do with Donald - though i admit he does trigger me in all ways.” Yeah, I’m sure it had nothing to do with Donald Trump.

4) Shaun King: Apparently, the liberal obsession with finding black pundits who have no talent other than the ability to come up with new things to call racist is jejune. Now, with Shaun King’s column in the NY Daily News, we’ve moved on to white guys who are pretending to be black calling everything under the sun racist. Incidentally, I’m just as black as Shaun King; so I can say that. On the other hand, I do have to give Shaun King credit because he was magic in this scene from Tropic Thunder!

Defining Quote: “The guy that wrote this story for the New York Daily News, he’s not a journalist. He’s a race hustler from Twitter, from the Black Lives Matter movement who stirs racial controversy to elevate himself. Listen, the guy’s been busted. First of all, he’s white and presenting himself as black. He said that as a child in high school he was allegedly attacked by a group of white people because he was black. Well, he wasn’t black and there were people saying that wasn’t why he was attacked and there’s no proof of it.” – Jason Whitlock

3) Colin Kaepernick: Only in our celebrity-obsessed culture could one of the worst quarterbacks in the NFL be rewarded for starting a widespread movement encouraging other pampered athletes to disrespect the flag of the nation that made them so wealthy. Here’s hoping some aspiring Lawrence Taylor gives him the Joe Theismann treatment so he can start his career as an analyst on MSNBC a little early.

Defining Quote: “You know, it's sad when you see rich, spoiled athletes that don't recognize what an incredible blessing this country is. You know, it's very easy when you're sitting there rolling in millions of dollars to disrespect this country. I come at it from a different perspective. I come from a perspective of my dad was imprisoned and tortured in Cuba, and America has meant what it's meant to millions across the globe. It's meant hope. It's meant freedom.” – Ted Cruz

2) Barack Obama: Obama’s entire 2016, just like his presidency, was a little more than a string of disasters tied together with vacations, golf and smug lectures to people who quite correctly judged that he was incompetent. Obama started 2016 being humiliated by his pals in Iran who pushed American soldiers around for the fun of it and he ended the year trying to do everything possible to hinder the incoming Trump Administration. In 20 days, he’ll be gone….well, from the White House. Undoubtedly, the worst President in American history will still be out there giving his pompous little speeches to the “bitter clingers” in-between games of golf and getting high when Michelle’s not around. We’re not going to miss you, buddy.

Defining Quote: “The most important political story during the nearly eight years of the Obama presidency is how that presidency delivered a neutron-bomb strike to his party. Obama and the political structure of America have been left standing — but nearly 1,000 Democratic officeholders have been defeated.” – John Podhoretz

1) Hillary Clinton: Hillary Clinton is unlikable, hopelessly corrupt, relentlessly dishonest, arrogant, criminally incompetent, too feeble to be President and has a weird laugh. This is a woman who should have been running for President of her cell block, not President of the United States. That was bad enough. But, listening to the media force feed us a steady diet of, “Isn’t she wonderful for walking up the steps by herself” and “Wow, Hillary’s existence certainly is a wonderful treat for every woman who ever lived” was maddening.

Defining quote #1: “I know she has begun to hate everyday Americans, but I think we should use it once the first time she says I'm running for president because you and everyday Americans need a champion.” – Hillary’s aide John Podesta in an email revealed by WikiLeaks

Defining Quote #2: “To just be grossly generalistic, you can put half of Trump supporters into what I call the basket of deplorables. Right? Racist, sexist, homophobic, xenophobic, Islamaphobic, you name it.” -- Hillary Clinton

Defining Quote #3: “’Why aren't I 50 points ahead,' you might ask.” – Hillary Clinton expressing bafflement that she wasn’t cruising to an easy victory.

In the “honorable mention” section, you left out John McCain and Lindsey Graham...

John Hawkins: PuhLEEZE, get Joy Reid (MSNBC) on that list right away.

Delightful article! Thanks for posting.

We need some sub-divisions:

Repubilcans In Name Only

We give them too much validation by remembering them with sobriety. They are better remembered with mirth.

Missing a few zeros on that number ...

In the “honorable mention” section, you left out John McCain and Lindsey Graham...


They are CERTAINLY higher than the cast of Hamilton. They are right up there with Obama and Hillary.

After reading that stuff I feel like I need a bath... :(

Why even rate them? ANY liberal is annoying to me and even knowing they are liberals offends me.

Very true...In fact, they are even MORE despicable, since they camoflauge as republicans....

Are you saying that you disagree with John Hawkins, and that they do not belong on the list?

I don’t know who said it first, but liberalism is a mental disorder.

We need a category for “useful idiots.”

Indeed communism and socialism has many names.

Samantha Bee - because Amy Schumer has to be funnier than SOMEONE!