The head of the House Permanent Select Committee on Intelligence is “alarmed” the FBI concurred with the CIA’s assessment regarding Russia’s alleged interference in the presidential election without informing Congress.

The CIA has not issued any public statements, and all assertions are based on anonymous leaks.

Congress and the federal government are both currently engaged in concurrent investigations into the allegations that Russia wanted President-elect Donald Trump to win the presidency. FBI Director James Comey agreed with the CIA’s assessment, according to a Washington Post report Friday, however, earlier reports citing lawmakers briefed by the FBI stated the FBI did not concur with the CIA.

“In the course of the House Intelligence Committee’s ongoing oversight of cyber-attacks during the U.S. presidential campaign, we have not received any information from Intelligence Community (IC) agencies indicating that they have developed new assessments on this issue,” said chairman Rep. Devin Nunes in a statement Friday.

Nunes said he was “alarmed” that new information regarding the investigation “continues to leak to the media but has not been provided to Congress,” despite his Dec. 12 letter which requested further information on Russian involvement in the election. Nunes also noted he requested the intelligence community to provide a classified briefing in order to “set the record straight” on its current assessment of the issue. 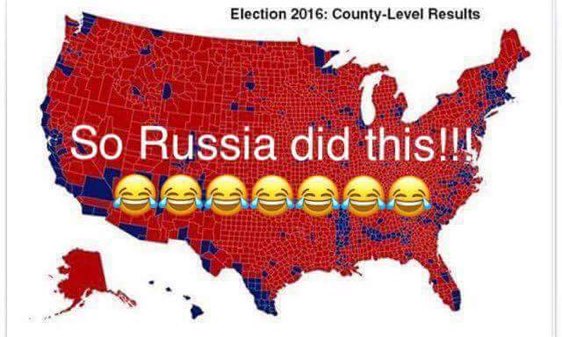 Wanna bet this change of heart by the FBI was not based on new information but a call from the WH.

This story is much like the “video” that sparked Benghazi...question—how corrupt is our government? These two agencies have changed their story several times.

I can’t believe dailycaller has such a false headline. Nunes is alarmed obama refuses to provide information to Congress, preferring to leak BS to the public instead, to wit:

Nunes said he was “alarmed” that new information regarding the investigation “continues to leak to the media but has not been provided to Congress,”

John Brennan SAYS that the FBI (Comey) and NSA (Clapper) basically agreed with his stance. Neither of these gentleman or agencies has stated this for themselves, nor has any agency presented their evidence to the people (Congress.) Until such time as that happens, I will consider the entire thing to be propaganda.

8 posted on 12/17/2016 7:48:03 AM PST by ez ("Abashed the devil stood and felt how awful goodness is..." - Milton)
[ Post Reply | Private Reply | To 1 | View Replies]
To: ez
"John Brennan SAYS that the FBI (Comey) and NSA (Clapper) basically agreed with his stance. Neither of these gentleman or agencies has stated this for themselves, nor has any agency presented their evidence to the people (Congress.) Until such time as that happens, I will consider the entire thing to be propaganda."

Which is why these things should be under oath and on the record. Which is also why these same agencies will not appear before Congress to testify.

I do not believe that anyone knows how corrupt the Government actually is. Each time it seems that they have reached the bottom, they descend to a new level. What seems consistent is that they all believe that they are gods meant to be worshiped and that they hold the Citizen in the basest of contempt. Along with the belief that they are the masters and we are the slaves. As POTUS he should have

The Washington Post said that officials disclosed that “John Brennan SAYS that the FBI (Comey) and NSA (Clapper) basically agreed with his stance. “

rumor based on hearsay based on smoke from unnamed sources.

14 posted on 12/17/2016 7:57:18 AM PST by garyb
[ Post Reply | Private Reply | To 8 | View Replies]
To: RoosterRedux
We have it from Obama himself that the Russians hack systems like the DNC and U.S. government systems on a regular basis. So the Russians were doing things that related to the U.S. election.

We've heard that the Podesta Wikileaks affected the election. I'm sure that's true. Obama told us so and it is obvious that they must have had an impact.

What we have heard from the media is that the Russians were the source of the Podesta emails. Over and over and over.

OTOH, what we have NOT HEARD from the President, the CIA, the FBI or NSA is that the Russian government is the source of the Podesta emails. It is inferred. It is accepted as general knowledge. It is something “we all know is true”. But it is never stated.

I'm starting to believe that the whole “The Russian's Did It” story is just a scam. In fact I'm certain of it. it looks to be this years winner of the Dan Rather Award for Excellence in Fake News. Obama tries to redefine his legacy with crocodile tears? Buahahahahahaha. His last presser of 2016 was a total embarrassment.

If we think about how the CIA was made to facilitate the State Departments horrible Arab Spring community organizer debacle, FAILED .Few remember now that this was accomplished by radical application of Social media led by Google, Facebook and twitter. There is good reason why Twitter did not attend the recent Silicon Valley summit at Trump Tower, because they were accomplices in betraying US allies Libya and Egypt, and Trump intends to bring the hurt on them, as he should.

When Arab Spring failed in Libya Obama convinced NATO to reduce Tripoli to rubble, caused the assassination of a US ally,opened up the heart of Africa to groups like Boko Haram, and caused the deaths of thousands of Christians in Egypt at the hands of the Muslim Brotherhood.

This eventually set in motion hoards of refugees from Syria, which also had been destabilized by Obama through Arab Spring, the CIA helped him. Now on TV last night Obama was inviting sympathy with the crocodile tears of a defeated Alinsky ideologue, saying how his failure in Syria bothered him, while he tried to community organize his way out of war instead of putting boots on the ground in Syria, which also would have been a mistake, unless he agreed to help Russia protect itself from the advancing hoards of Muslim Refugees.

You can bet that Putin is Obama’s mortal enemy.Few understand it though, which is why I am holding forth here at length. Putin may be Obama’s enemy but he is not America’s enemy.

I can hardly wait until Obama goes wailing his crocodile tears into the dist bin/crapper of history. He is more than an embarrassment, he is exemplary of the Utopian Left fascist, who refuses to believe that his Alinsky based international politics have failed, bringing about millions of deaths in the Middle East.

BUT THE US PUBLIC NOW IS BEGINNING TO KNOW.

America will never again elect a Community Organizer in Chief.

Putin saw Obama coming and in order to prevent an influx of a million Muslim refugees into The Crimea , Putin seized it and the Eastern Ukraine, in self defense.And he sealed the borders.

And NOW Obama has the profoundly treasonous temerity to falsely accuse Russia of hacking the US election? What a laugh.

Obama attempted to unleash a demographic invasion of Russia via hundreds of thousands of Muslim refugees, but the bulk went to Western Europe, and in the process are destroying the EU , thanks to Obama.

Putin wins with the battle of Aleppo, as Obama tries to publicly shame Putin with the killing of innocents. Obama’s problem is that Putin does not have a utopian liberal heart, and has chosen to defend Russia, better for Syrians to die than Russians.Who can blame Putin in these circumstances?

Obama is a miserable failure trying to cover his a$$ by accusing Russia of something it did not do.Something it did not have to do. In all likelihood Assange received the DNC information from one or two disgruntled DNC staffers , who were angered by how Bernie Sanders had been treated, along with several US intelligence officers who did not want to see Clinton achieve the presidency because of how she had traduced US security law, and escaped prosecution by a completely traduced DOJ under Lynch.

Russia did not have to do a damn thing to sway the US election. Obama and Clinton effed themselves and got royally screwed by DNC leakers and an angry unidentified group in intelligence officers,just as Obama and Clinton were trying to screw America. Putin and the Russians clearly targeted Hillary Clinton. Thankfully, she is
used to ducking from sniper fire - she learned this when she led the U.S.
Marine Corps in her dangerous Bosnia missions.

While she got away without nary a scratch, Putin did enough damage to
make her lose the election - the bullet hit her blackberry which hacked
into her homebrew server.

The rest is herstory.

Too bad Comey blew the FBI’s credibility all to hell by protecting Hillary Clintoon this summer, isn’t it?

Comey needs to be gone right after the words “So help me God,” on January 20th!

Looks like there might be a few or more in the FBI that should be worried. After all, fired is one of Trumps favorite words.