Hillary Clinton attempted to link Donald Trump to the KKK in an attack ad the other day, because former Klansman David Duke showed his support earlier in the year for the Republican nominee.

Grandma forgot that members of her beloved party actually founded the organization in the first place.

She also couldn’t recall that a prominent Klansman, Robert Byrd, was her “mentor.”

What also seemed to slip Hillary’s mind is that the KKK gave $20,000 to her campaign.

Turns out that the people used in Clinton’s KKK ad are actually paid actors, not klansman.

According to Joe Wayne at The AntiCoIntelPro Show this is very much the case in her latest attack ad (above), which reportedly uses no actual Klan members, but rather, paid actors masquerading as Trump supporting racists..

Hillary all kissy-kissy with KKKByrd: real and documented.

Hmmm...let’s see now. Which one of the candidates advertises for actors?

I hope Trump makes hay about it.

I called that within 5 seconds of hearing the ad.

Maybe Trump will respond with an ad showing Hillary with a REAL KKK grand=wizard-whatever.

Just gets better all the time. Our future POTUS could pay these actors $25 an hour to say they faked it. Ummm, no, I guess that would mean those $15 bit actors would meet a most unwelcome fate.

But it goes give Mr. Trump more fodder for the debates...

Please. You could be neighbors with card carrying terrorists and had lunch with them You are now a terrorist. Trump had to pay graft to umpteen corrupt politicians, doesn’t make him a politician.

“I’m Hillary Clinton, and I approve this message”

It full of lies and outright deceptions, so or course she does

I hope Trump is immediately responding to the deceptions of the Crooked One (spouse of the Bent One), because if he is I’m not seeing or hearing much about it.

Me, too. I KNEW no Klan member would voluntarily be in an ad. That being said, the head of the KKK HAS endorsed Madam Pantsuit!

17 posted on 08/27/2016 3:28:12 PM PDT by originalbuckeye ("In a time of universal deceit, telling the truth is a revolutionary act." - George Orwell)
[ Post Reply | Private Reply | To 8 | View Replies]
To: TigerClaws
"Turns out that the people used in Clinton’s KKK ad are actually paid actors, not klansman."

It could have been anybody "under the hood." 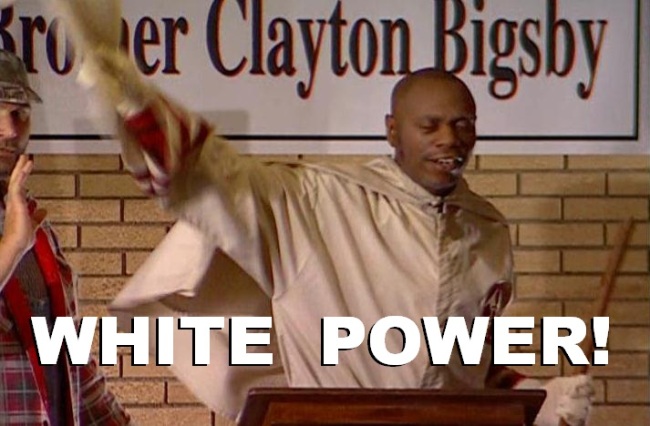 I would like to see an ad that starts out with the klansman promoting hillary and then a photo of her and byrd— and then end with this is what Hillary has tried to do to me saying I am a racist and a bigot-— It is time to put the sleazy politics as usual behind us— America needs a change..