Bill Clinton accuses FBI of serving up a 'load of bull' It's going to be a while before all of Clinton's emails are released Emails reveal Hillary's shocking pay-for-play scheme New emails show Huma scheming for Hillary Trump on Clinton: 'She's got problems' Clinton insists FBI never said she lied about emails

Bill Clinton is accusing the FBI director of serving up “the biggest load of bull I’ve ever heard” — marking the first significant public comments from the husband of the Democratic nominee on the scandal that’s plagued his wife’s campaign for over a year.

“First of all, the FBI director said, when he testified before Congress, he had to amend his previous day’s statement that she had never received any emails marked classified,” Clinton told journalists at an Asian American Journalists Association meeting in Las Vegas on Friday, making a strong defense for Hillary Clinton.

He added, “They saw two little notes with a ‘C’ on it — this is the biggest load of bull I’ve ever heard — that were about telephone calls that she needed to make. The State Department typically puts a little ‘C’ on it to discourage people from discussing it in public in the event the secretary of state, whoever it is, doesn’t make a telephone call. Does that sound threatening to the national security to you?”

Hillary Clinton has been under fire since it was discovered last year that she exclusively used her own server to conduct all her work related email on.

On Friday, Bill Clinton went on to say it is inconceivable his wife was threatening national security.

And Slick Willie knows a lot about “bull”. He invented it.

Then there must be something there . . .

Hillary’s internals must not be looking as good as the polls. Wheeling Billy Boy out again to rescue her. Maybe he should just have more secret Tarmac meetings so we don’t have to look at his face or his crooked finger.

Your wife is so reckless that people die because of her recklessness.

Oh, yeah, and if you do have AIDS, as it is rumored, be a sport and die soon. There are decent AIDS victims who need the meds you're bogarting.

She thought all those “C” we’re there just do direct her attention to the matter... 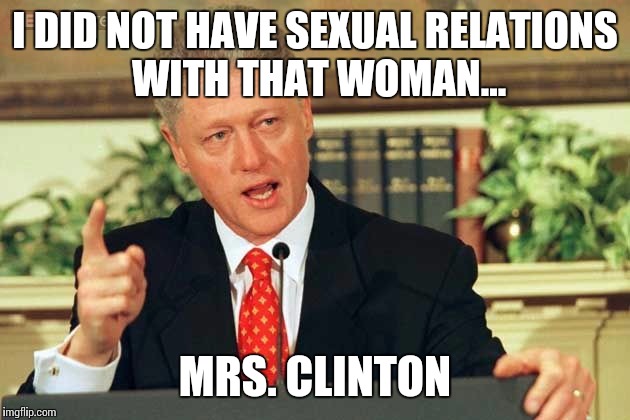 https://t.co/fJGNXEHPHi
Clinton took $100k cash from & was director of company that gave money to ISIS

The only person that knows bullshit is Bill Clinton and the Butcher of Benghazi...I have a lot more, but he was the one born in B.S., eats B.S., lives in B.S., and will die in B.S.!!!

Bill, it all depends on what the definition of “bull” is, Bill.

State's excuse for those phone call lists being marked confidential is that they were only confidential until the call was made.

Should they be confidential? Well, who the SoS is calling and the subject might be useful to our opponents, so yes.

Lastly, who should Bill Clinton blame for these "improperly" marked phone call lists? How about the person responsible for originating classified data at State, his idiot wife.

Bill just screwed up. He violated his own rules.

If Hillary manages to steal this election, just imagine how proud liberals will be to have not only the First Woman President, but within a few short years, the Wealthiest Woman On Earth as their president.

“Bill Clinton accuses FBI of serving up a ‘load of bull’”

Did he make his statement under oath?

This is Mr. Comey’s fault for not charging her. If he had the truth would come out in testimony and that big blowhard Bill Clinton wouldn’t be able to lie about what was found.

‘I never had sex with that woman, Miss Lewinsky’. That is all you have to know about what Bill Clinton is saying. He is really bad about the truth.

C for Clinton
C for Corrupt
C for Conniving

17 posted on 08/13/2016 11:47:27 AM PDT by NormsRevenge
[ Post Reply | Private Reply | To 1 | View Replies]
To: Hojczyk
Just like al Qaeda and ISIS whom they created
and protect and arm, crooked Comey and Clinton
are paired complicit criminals (peas in a treasonous pod).

They are responsible for genocide and treason
and murder of many, many witnesses.

US Navy Seal Murdered In Secret Mission to Iran

Iranian scientist gives info to US on Iran nuke program,
Hillary reveals it emails and Iran hangs him for treason

Hillary Clinton-Linked Company: Our Alleged Payments To ISIS Are Under ‘Review’

'When Obama Took Office There Was No ISIS, Now They Have 80K Fighters' Hillary Clinton Got Wealthy By Arming ISIS Militants
Assange told Democracy Now that Clinton was director of French company Lafarge
whilst simultaneously serving her term as Secretary of State.
Lafarge attempted to topple President Assad by arming ISIS
and supporting their efforts in destabilizing the country.
Daily Pakistan reports: “Hillary’s hacked emails include info
on Hillary arming the rebels in Syria – which ultimately
became the Islamic State militant group ,” he went on to say while responding to a query.


Lafarge also has close ties to Democrat presidential candidate Hillary Clinton.
Apart from being a regular donor to the Clinton Foundation,
Clinton herself was a director of Lafarge in the early 1990s,
and did legal work for the firm in the 1980s.
During her connection to Lafarge, the firm was implicated
in facilitating a CIA-backed covert arms export network to Saddam Hussein.
An investigative report by the French daily Le Monde
revealed in June that the corporation, the world’s leader in construction materials,
had paid taxes to ISIS middlemen, as well as other armed groups in Syria,
to protect its cement business operations in the country.
But the Le Monde story only covered a fraction of the revelations.
Previous investigations by Zaman al-Wasl, an independent news outlet
run by elements of the Syrian opposition, revealed that Lafarge
had even regularly bought oil from Isis. “Then just before her husband, Bill Clinton, was elected president in 1992,
Lafarge was fined $1.8 million by the Environmental Protection Agency
for these pollution violations. Hillary Clinton had left the board of Lafarge
in spring, just after her husband won the Democrat nomination.
A year later, under Bill’s presidency, the Clinton administration reduced
Lafarge’s EPA fine to less than $600,000.” We believe you Bill. /s

” I want you to listen to me. I’m going to say this again: I did not have sexual relations with that woman, Miss Lewinsky. I never told anybody to lie, not a single time; never. These allegations are false. And I need to go back to work for the American people. Thank you.”

Hey Bubba did your pumpkin Hellary make you wipe down the illegal e-mail server there in the closet? Kinda dusty in there, no? You knew that server was illegal in the house there Mr. ex- president-—guilty complicity.