In all probability, none of the photos you saw of Paglia were taken when she was under 45. Now, we can’t produce pictures of a 68-year-old Taylor Swift, but chances are she’ll not look as good then as she does now? Right?

I’ll be long gone by then. 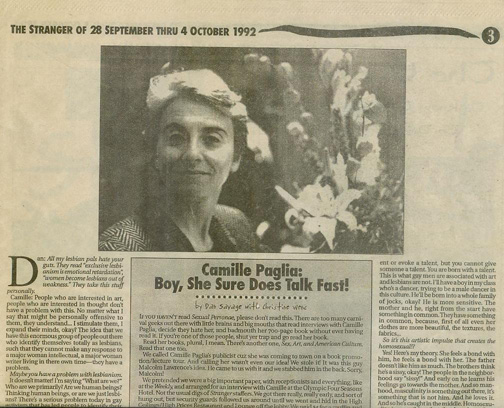 In all probability, none of the photos you saw of Paglia were taken when she was under 45.

You know Steve, from time to time all of us occasionally post something really dumb to FR. And it's not like social media, where you can go back and delete your posts. But the trick is to move on from the thread. Doubling, tripling and quintupling down only calls attention to the original stupidity.

So, I can't believe we're still talking about this, but here is an under 45 picture of Paglia. As is the case with most devoted feminists, she was never a particularly attractive woman.

Swift, will indeed grow older, but it wouldn't surprise me at all if she ages well. A lot of small breasted women do. In the meantime, she is widely considered one of the more attractive women in entertainment, is a self-made billionaire who does a lot of charitable work, and doesn't smoke, drink, use drugs or corrupt girls with hypersexual behavior. The world would be a much better place if there were more Taylor Swifts .

Agreed that Paglia is occasionally spot on in her commentary, but she is dead wrong here.