-AN INTERESTING INVENTION OF A YOUNG LADY IN WASHINGTON BY WHICH CHILDREN AT THEIR PLAY MAY BE TAUGHT THE TRUE LAWS OF ECONOMICS.

Miss Lizzie J. Magie, a single taxer of Washington, D. C., has invented an ingenious game, played with checkers and dice as is parcheesi, and thus describes it for the REVIEW :

"It is a practical demonstration of the present system of land-grabbing with all its usual outcomes and consequences," says Miss Magie. "It might well have been called the 'Game of Life,' as it contains all the elements of success and failure in the real world, and the object is the same as the human race in general seem to have, i. e., the accumulation of wealth. Representative money, deeds, mortgages, notes and charters are used in the game; lots are bought and sold; rents are collected; money is borrowed (either from the bank or from individuals), and interest and taxes are paid. The railroad is also represented, and those who make use of it are obliged to pay their fare, unless they are fortunate enough to possess a pass, which, in the game, means throwing a double. There are two franchises: the water and the lighting ; and the first player whose throw brings him upon one of these receives a charter giving him the privilege of taxing all others who must use his light and water.

"There are two tracts of land on the board that are held out of use - are neither for rent nor for sale - and on each of these appear the forbidding sign: 'No Trespassing. Go to Jail.' One of these tracts of land (the largest on the board) is owned by Lord Blueblood, of London, England, and represents foreign ownership of American soil. A jail is provided for any one who trespasses upon this land, and there the unfortunate individual must linger until he serves out his time or pays the required fine. 'Serving out his time' means waiting until he throws a double.

"Before the game begins, each player is provided with a certain amount of cash, sufficient to pay all necessary expenses until he is well enough along in life to earn his living. Should any one be so unlucky, or so reckless and extravagant, as to become 'broke,' there is a nice little poor house off in one corner where he may tarry until he makes a lucky throw or until some friend takes pity on him and lends him enough to set him on his feet again. And here is where he generally gets 'soaked,' for the other players, taking advantage of the unfortunate one's necessities, demand an enormous rate of interest which the impecunious individual must pay before he can complete his round and get his wages.

"The rallying and chaffing of the others when one player finds himself an inmate of the jail, and the expressions of mock sympathy and condolence when one is obliged to betake himself to the poor house, make a large part of the fun and merriment of the game.

"Each time around the board represents so much labor performed, for which so much wages are paid. When a player has been the rounds ten times he retires from his labors, although he still remains in the game, which is not finished until the last player has made his tenth round. It takes forty moves to make a round and there is in each round one little black-bordered spot marked 'Legacy,â€™ and whenever a player stops on this he receives a cash legacy. In each round there are three spots marked 'Luxury,' and these the player may indulge in or not, according to his inclinations or finances, but each luxury purchased counts the player so much more at the end of the game.

"General directions for playing the game accompany this description, but it is difficult to make a set of rules that will cover all contingencies since no two games are alike. The combination of circumstances are so many that almost every time the game is played new situations are brought out. Thus it is a game that is always interesting - never monotonous. It was the original intention of the author simply to work out a demonstration of how the landlord gets his money and keeps it, but while doing this there gradually developed a game which has proven one of amusement as well as of instruction and one which has attractions for both old and young.

"Children of nine or ten years and who possess average intelligence can easily understand the game and they get a good deal of hearty enjoyment out of it. They like to handle the make-believe money, deeds, etc., and the little landlords take a general delight in demanding the payment of their rent. They learn that the quickest way to accumulate wealth and gain power is to get all the land they can in the best localities and hold on to it. There are those who argue that it may be a dangerous thing to teach children how they may thus get the advantage of their fellows, but let me tell you there are no fairer-minded beings in the world than our own little American children. Watch them in their play and see how quick they are, should any one of their number attempt to cheat or take undue advantage of another, to cry, 'No fair!' And who has not heard almost every little girl say, 'I won't play if you don't play fair. ' Let the children once see clearly the gross injustice of our present land system and when they grow up, if they are allowed to develop naturally, the evil will soon be remedied."

TOPICS: Culture/Society; Philosophy
KEYWORDS: landlord; monopoly; progressingamerica; progressivism
First published in 1904, this writing is in the public domain.
1 posted on 12/18/2015 9:54:42 AM PST by ProgressingAmerica
[ Post Reply | Private Reply | View Replies]
To: celmak; SvenMagnussen; miss marmelstein; conservatism_IS_compassion; Loud Mime; Grampa Dave; ...
Here is what the board of the Landlord's Game looks like.

If you are thinking this looks similar to Monopoly, you're right. The Landlord's Game is the predecessor for Monopoly. 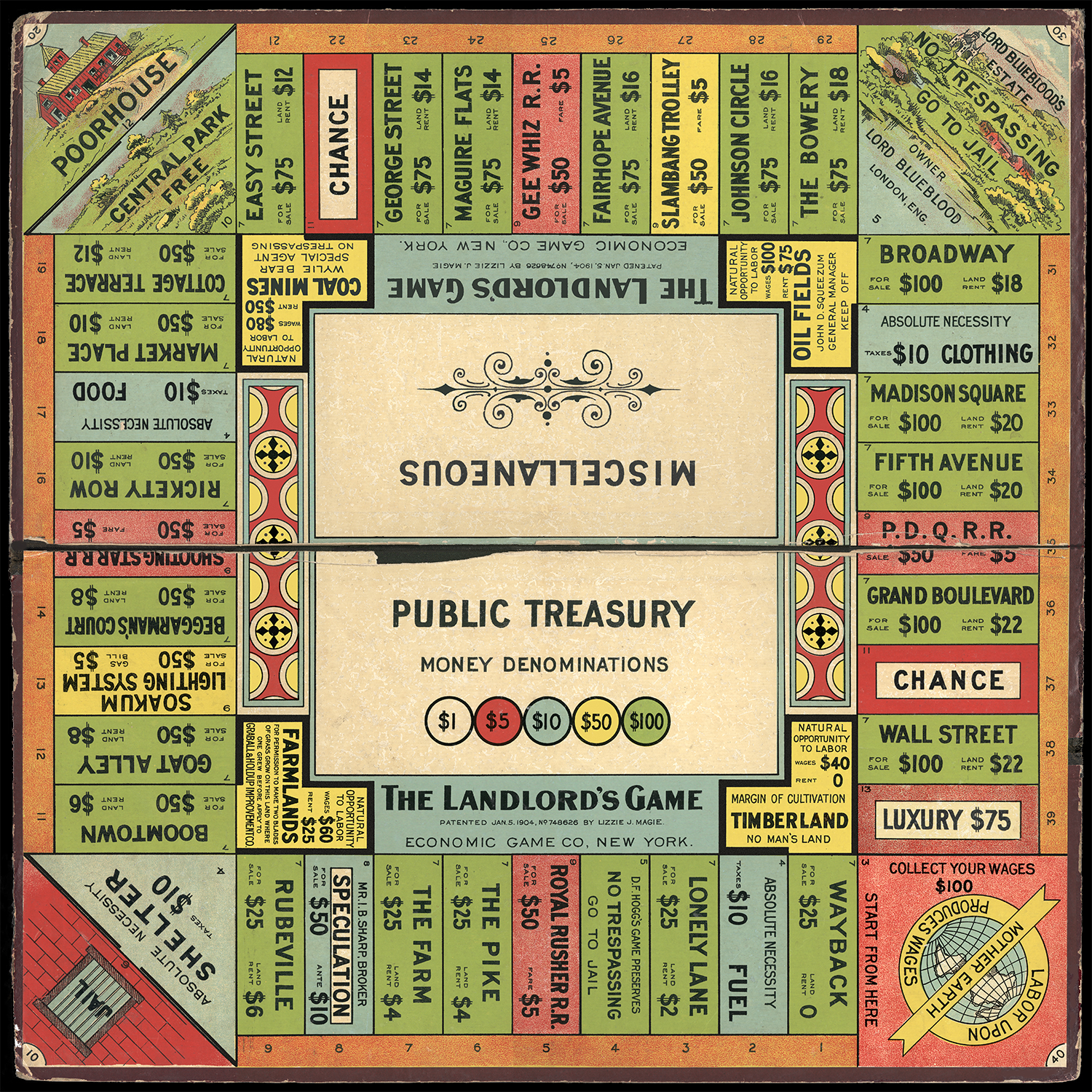