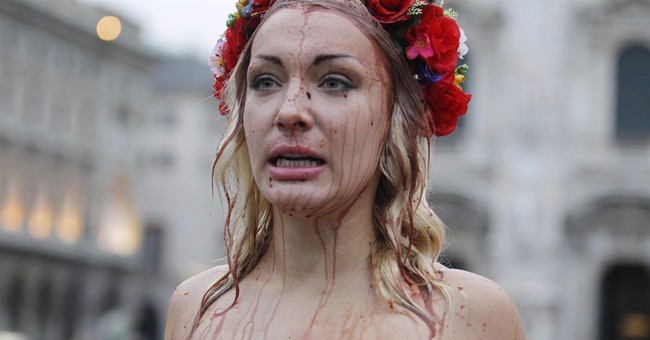 My feminist colleagues have a lot of explaining to do. Despite clear evidence of his innocence, they are continuing to peddle propaganda suggesting that a black Harvard Law student named Brandon Winston is guilty of sexual assault. I'm referring to their shameful decision to show the film The Hunting Ground to their students. In the process, they are presenting the film as an accurate portrayal of rape on college campuses in general and of several discredited cases in particular.

Whether they realize it or not, these feminists have allowed their commitment to advancing feminism to trump their commitment to fighting racism. In fact, their recent actions in repeating false accusations against black college students promote racism in a way not unlike the infamous case of the Scottsboro Boys in the 1930s.

As of this writing, Brandon Winston has been placed before three fact-finding bodies charged with considering accusations that he committed sexual assault. All three bodies including the Harvard Law faculty, a Massachusetts grand jury, and a 12-member criminal trial jury have dismissed those charges.

Meanwhile, his accuser Kamilah Willingham has become a celebrity simply by leveling false allegations against Winston. She was given an opportunity to go in front of a Massachusetts grand jury and provide extensive testimony against Winston. But afterwards he was only indicted on two counts of "indecent assault and battery," which is not a sexual assault, against Willingham's friend. At trial, Winston was acquitted on both of those charges.

It is noteworthy that at Winston's trial, he was only found guilty of an incidental misdemeanor, which was not a sexual assault. That conviction came only after the jury was deadlocked for three days. Yet he continues to be prosecuted in classrooms all across America. Sadly, feminists masquerading as experts in sociology, criminology, and so-called social justice often lead the prosecutions.

Sadder still, CNN has advertised The Hunting Ground with a press package, which mentions the fact that a jury convicted Winston for a misdemeanor non-sexual assault. But the press package fails to mention anything about the evidence, which showed that Willingham lied to a jury in saying that Winston had committed felony sexual assault. CNN refused to mention his vindication against a lying accuser.

The consequences of this media led and feminist backed public lynching of an innocent black man have been severe. Winston had to spend four years defending against Willingham's false accusations. Meanwhile, his accuser has enriched herself with the help of CNN and scores of incompetent professors.

Actually, calling my fellow professors incompetent is entirely too kind. Like the makers of The Hunting Ground, many of these professors know they are defaming an innocent man. But for many of these feminists, ideology supersedes the pursuit of truth. So they continue with their public prosecution. The facts are irrelevant. They are all blinded by a common vision.

For objective observers of the case it is now beyond dispute that Ms. Willingham has engaged in malicious conduct with regard to her accusations against Brandon Winston. For example:

Willingham produced a condom which she led authorities to believe was used by Brandon Winston to rape her friend. DNA tests later showed that the condom matched Ms. Willingham, not her friend, and an unknown male. Willingham had to have known she used the condom with another man. Yet she knowingly presented it as false evidence of rape against a man she knew to be innocent. This alone warrants bringing criminal charges against Willingham.

Ms. Willingham also falsely accused Brandon Winston of drugging her. However, the only evidence of drugs involved in the night in question was that Willingham herself illegally possessed, used, and distributed cocaine to her friends.

Put simply, this woman is a liar and a malicious one at that. She does not deserve to be put in front of a camera. She deserves to be put behind bars. Additionally, CNN deserves to be sued for knowingly broadcasting a false and defamatory account of the Brandon Winston debacle.

But what about my feminist colleagues who continue to peddle such propaganda by showing The Hunting Ground? Like the white racists in the Scottsboro case they persist in prosecuting obviously innocent black men like Winston but this time in the court of public opinion rather than a court of law. Like the prosecutors in the Scottsboro case they won't drop their accusations of rape even after the evidence has shown that no rape actually occurred. What is their motivation for doing so?

In the Scottsboro Boys case, the jury convicted eight innocent black men because they wanted to send a larger social message in order to keep black men in their place. It was an attempted lynching born out of ignorance and an exaggerated fear of black male sexuality.


Please Freepmail me if you want to be added, or removed from the ping list

Nobody knows what “racism” is or what “sexism “ is but everybody has the right to be either regardless of whatever definition they throw at you.

I am free to be racist and sexist as long as I don’t interfere with the freedoms of others.

“I am free to be racist and sexist as long as I donâ€™t interfere with the freedoms of others.”

For now. If you think the Left will abide that continued freedom, you’re mistaken.

The issue is never the issue. It is about the cause of advancing societal revolution.

Every time a SJW humiliates a fellow Liberal, a Conservative gets his wings.

My right to be free does not depend on the Left, although the Left can certainly attempt to violate my right to be free. And I in turn have every right to defend my freedom at the point of bayonet if necessary, to quote an old Reagan statement.

If “feminism” was really about protecting and advancing the interests of women, “feminists” would be actively pointing out that black males between 16 and 30 (a mere 3 percent of the population) commit 48 percent of all rapes, and over 50 percent of all murders of women. They would also point out that the majority of women who contract HIV/AIDS do so from a black sex partner.

They would also be talking about arranged marriages, genital mutilation, and the other atrocious behavior towards women by Muslims.

However, “feminists” aren’t about to speak out against black or Muslim mistreatment of women, because blacks and Muslims are “oppressed” groups, and are therefore considered “feminist” allies.

They’re running around like raped robots...because they ARE robots!

As Vigilanteman said (quoting Saul Alinsky), the issue is never the issue. All these manufactured conflicts — race, sexism, homosexuality, campus violence — are wedge issues adopted by the Left as ways of splintering the existing order. Truth blunts the edges, so it becomes a casualty. After all, the end justifies the means. What are a few ruined lives next to the betterment of the Collective?

During the deliberations I kept my mouth shut and listened to the ladies on the Jury rip the woman apart. It was a learning experience, it seemed that women are a better judge of women than men are.

The Judge a Woman went spastic when we returned a Not Guilty Verdict.

Would that it were so. Most liberals are not only uneducable, but untrainable.

I agree and will not be surprised if it comes to that.