The true story of Garlin Murl Connerâ€™s heroism in the face of a Nazi onslaught might have gone to the grave with the soft-spoken Kentucky farmer if not for a chance phone call from another military man trying to piece together the last days of his uncleâ€™s life.

The bravery of Conner, who died in 1998 at the age of 79, is well-documented. The first lieutenant, who was wounded seven times, earned an incredible four Silver Stars, four Bronze Stars, seven Purple Hearts and the Distinguished Service Cross for his World War II heroism. But it was what he did on Jan. 24, 1945, near Houssen, France, that elevated his courage to mythical status.

Modern history is often added to GGG, but not always pinged. File this ping under "wish I could ping this twice." Thanks huldah1776.

2 posted on 11/04/2015 2:54:06 PM PST by SunkenCiv (Here's to the day the forensics people scrape what's left of Putin off the ceiling of his limo.)
[ Post Reply | Private Reply | View Replies]
To: huldah1776
I remember back when I was stationed in NYC during the 6os there was a PP, Permanent Private, who was saluted by some rather senior Officers. He worked in the Commissary and was a wild man.

I found out that he got the Blue Max in Korea for saving his unit from being over run and killing an ungodly number of people.

Wow! Thanks for sharing.

Me too. Wow. Just wow. Give the soldier the Medal for Heavens Sake. He more than earned it.

Conner did not get screwed over for his actions. He was awarded the nation’s second highest award for bravery - the Distinguished Service Cross. What is being attempted now is to upgrade it to the MOH. Hope it works out for him. He had balls of brass.

This blog has gone dark, but you might be able to reach the site owner if interested.
http://www.thedonovan.com/

A few years ago, he had a post up about some privately owned memorials to fallen US soldiers in the Bastogne area. These memorials were built by civilian families in that area commemorating American soldiers who, singly or in small groups, continued to fight to the death after their units had been over run by the initial German advance that made “the bulge”.

There were stories told by either direct witnesses or descendants of same about American soldiers waging a hopeless solo war in hit and run attacks on the Germans over a period of days.

These memorials are highly valued by the families that “own” them and have been fought over in divorce proceedings and such like.

Imo, ever one of those Americans so commemorated were definitions of “above and beyond the call of duty”. 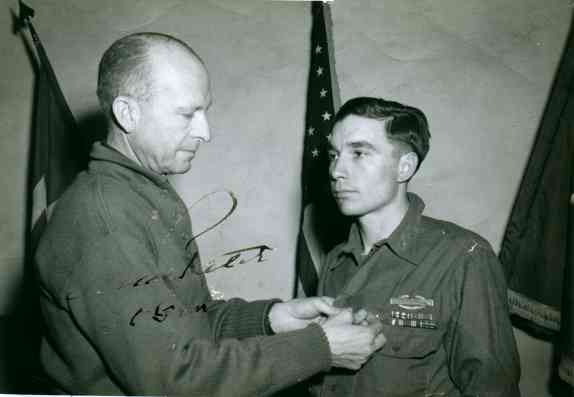 Wow! What an incredible account of a man’s indomitable spirit and incredible gallantry. Thanks for posting this.

Now, not to denigrate this man’s heroism in any way, I can say that I had a parishioner in my former parish in Austin, Tx, who had NINE Silver stars and IIRC, 5 or 6 Bronze Stars. He earned them in WWII. He rose from 2Lt to full Colonel. Retired as a Major General, Infantry.

Likewise, my college room-mate in Kentucky was in Nam the same time I was. He served with the 1st Division, the “Big Red One” as an E4. He never ever talked about Nam but while on a trip in eastern Kentucky, I visited his Mom in Magoffin County, near Salyersville. There on the living room wall was a picture of my room-mate in Marine dress whites. He had FIVE Silver Stars, 4 Bronze Stars with “V” device (valor). He joined the Marines after college and became a chopper pilot. He retired as a Major and now lives south of Nashville. He has terminal lymphocitic cancer from Agent Orange exposure. Without doubt, he was the toughest guy I’ve ever known when provoked but as gentle as they come otherwise.

blurry monitor. I believe they would all have a beer for their brothers.

Should also say when my roommate graduated from Marine flight school, he wore only one ribbon to the graduation ceremony. The general of the flight school command told him “Brown, go back into the barracks and put on ALL of your medals. He’d never mentioned to his fellow flight students that he’d even been in the Army. Naturally, they were astonished to see his ribbons. He is still quiet and reserved and never complains about his medical condition. One tough guy for sure.

Unless that guy was a W.W.I fighter pilot for the German Air Force I don’t think he got The Blue Max.

Here is a history of that medal and not given out again after the Germany lost the war in 1918.

Joachim Peiper of the Waffen SS referred to “those damned engineers” who stopped the German advance by knotting them at various crossroads and bridges (France had no highway system to speak of, at least not in most of the countryside), delaying the Antwerp offensive (already a long throw of the dice) until there was no chance of success.