Before his death in 2011, Christopher Hitchens warned about Hillary

“As for Mrs. Clinton, as for all she’s done for us and after all she’s suffered on our behalf, she feels she’s owed the presidency and who could possibly disagree? Her life is meaningless if she doesn’t get at least a shot and one can only sympathize. Unless you think, as I do, that people should be distrusted, who are running for therapeutic reasons,” said Hitchens.

Hitchens passed away in 2011, but his arguments against electing Mrs. Clinton are even more relevant today in light of her poor performance as Secretary of State, EmailGate, and her relationships with foreign officials who’s interests are not congruent with those of the United States:

Just a few reminders from Hitchens:

“If there was some foreign policy experience or brilliance Hillary Clinton had ever shown, maybe we overlook the fact that she and her husband have never met a foreign political donor they don’t like and haven’t taken from.”

“See if you can bear to read the sort of friendships that a former president is having. It’s undignified to think about it. From the Riady family in Indonesia, to numerous Chinese donors who left this country rather than show up for the hearings, but I don’t know of any such expertise on her part, except her pretense to have been under fire in Bosnia when she had not.”

“Actually, when there was pressure on the Clinton administration to do something about Sarajevo, to stop the killing, to prevent the ethnic cleansing, Hillary Clinton moved in hard on her husband and said don’t you do a thing about Bosnia, it’s spoil my wonderful healthcare plan.”

“At least on healthcare, she knows enough about the subject to have changed American healthcare for the worst, in her time.”

“To remind people at this point of the lowest stage of the Clinton administration when Eric Holder signed off at the Justice Department of the pardon of this fugitive, shall we call him financier, who’d also given a rather large loan that didn’t seem to have been repaid to one of Hillary Clinton’s brothers. Who in turn, with the other brother had gone for a walnut monopoly or was it a hazelnut monopoly in the Republic of Georgia or bits of the caucuses involved in American foreign policy here, plus donations to the Clinton library. It builds up and it goes on. Is this how the president-elect really wants to start?”

Yeah, the lust for power, the power to coerce, has been therapeutic for many an oligarch down through the centuries.

I really miss Hitchens. Hard to believe he is really gone.

Hitchens, for someone ostensibly on the left, was often right.

I liked Hitchens. But his arguments for atheism were embarrassingly thin.

On a stolen White House couch.

I think she’s running to protect and enhance her money making machine, and to keep herself out of jail.

Hitchens was a strange creature, he was an admitted Marxist but anti-totalitarian. Against Islam and political correctness and he had a neoconservative foreign policy.

Quite refreshing, he was, even if we disagreed with him on policy. The heavy smoking killed him.

Well you pretty much stole my comment! I agree. He was brilliant & most missed. Would sooooooooo love to hear his commentary on the 2016 race. Basically I would enjoy him talking about the phone book. 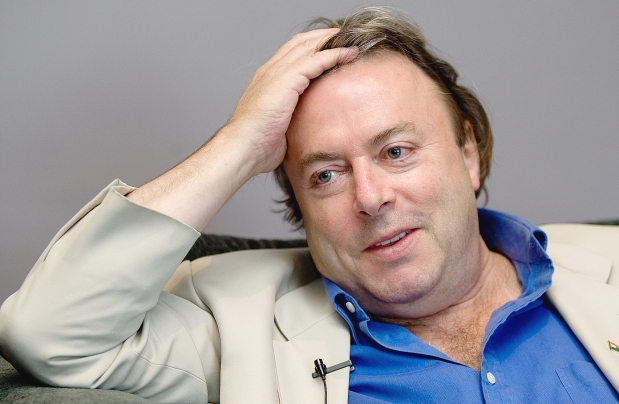 Grandma therapy could kick in, but she needs Webb Hubbell’s approval first!!! He was a brilliant skeptic, about virtually everything. Operating in the same kind of high functioning alcohol haze not uncommon among Brits (example: Winston Churchill) he was sometimes skeptical about things which were better left unscathed by his wit (Mother Teresa and religion in general, for example). But he was consistent and fearless, and even when you had to disagree with him he was worth reading and listening to.

Especially towards the end of his life, he was I think terribly conflicted, he may have resolved to believe the gospel, it only takes a second to become a gospel believer, salvation is ever so close for everyone, God knows.

How fast, how sure is the gospel of your salvation, it is but a breath away... see tag!

I can’t imagine entrusting a child to those two.