WASHINGTON (AP) -- The Supreme Court on Thursday upheld the nationwide tax subsidies under President Barack Obama's health care overhaul, in a ruling that preserves health insurance for millions of Americans.

The justices said in a 6-3 ruling that the subsidies that 8.7 million people currently receive to make insurance affordable do not depend on where they live, under the 2010 health care law.

The outcome is the second major victory for Obama in politically charged Supreme Court tests of his most significant domestic achievement. It came the same day the court gave the administration an unexpected victory by preserving a key tool the administration uses to fight housing bias.

Chief Justice John Roberts again voted with his liberal colleagues in support of the law. Roberts also was the key vote to uphold the law in 2012. Justice Anthony Kennedy, a dissenter in 2012, was part of the majority on Thursday.

"Congress passed the Affordable Care Act to improve health insurance markets, not to destroy them," Roberts wrote in the majority opinion.

In a dissent he summarized from the bench, Justice Antonin Scalia said, "We should start calling this law SCOTUScare." Using the acronym for the Supreme Court, Scalia said his colleagues have twice stepped in to save the law from what Scalia considered worthy challenges.

Justices Samuel Alito and Clarence Thomas joined the dissent, as they did in 2012.

The seeds of a new American Revolution have been planted. I expect that in my lifetime I will now see open revolt against a tyrannical government.

61 posted on 06/25/2015 8:29:31 AM PDT by The Great RJ (Â“Socialists are happy until they run out of other people's money.Â” Margaret Thatcher)
[ Post Reply | Private Reply | To 1 | View Replies]
To: Kazan
Using the acronym for the Supreme Court, Scalia said his colleagues have twice stepped in to save the law from what Scalia considered worthy challenges.

That's not your job!

To funnel money to Democrat cronies.

Ted is the only one who has stated from the beginning that as POTUS he will repeal every last word of Obamacare.

I’ll take the bet. My sense is they couldn’t allow themselves two pretzel decisions in one month so they chose the lesser of two evils to give to the Prez.

Meaning, they can’t change the definition of marriage.

Should I prove wrong in my assessment, we are truly lost as a nation, Republic, and country.

I took mine down the day Obama was elected to his second term. Don't know when/if it'll ever fly again.

Replaced it with the "Come and Take It" flag.

It means the words in laws mean whatever you think they mean today. Not just the president but everybody.

No, cultural Marxists do. And they own our schools, media, unions, and most churches.

Their lengthy process has produced the desired fruits. Here are some videos about how it happened:

If Pelosi and Reid and Obama had kept the text of ACA secret from us forever we wouldn’t suffer all this anxiety about what the words mean. I see now why secret laws are so progressive. You can apply them however you want to whomever you wish.

What is the purpose of state exchanges in light of the ruling?

That LM, is the real question. The states brought suit to begin with because it was obvious they would be bankrupt, having to pay the freight. So, now what?

If words have no meanings before the Supreme Court, there is no longer rule of law.

Why do you think that he does not mind taking cases to the Supreme Court? 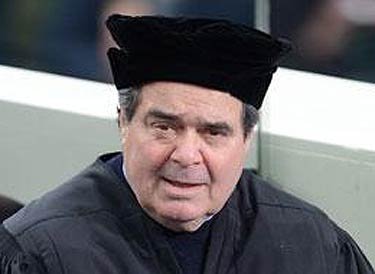 * sigh * You have no idea of the sh*t that Thomas, Alito and I have to put up with.
I cry for our Republic and its tattered Constitution. "Gay" (sic) "marriage" (sic) is next.

[[This along with the upcoming sodomite “marriage” ruling seems to be proof that God is judging us as a nation and that there will be no political solutions.]]

I felt a little uneasy about him at his swearing in when his six or seven year old son was behaving badly and was not corrected.