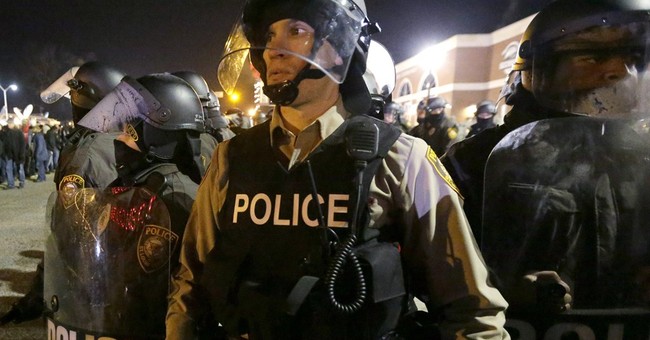 The NBA consists of 76 percent black players. But blacks are just 13 percent of the country. Clearly, the league engages in racial discrimination against whites. Silly, right? Well, this is exactly what the sleight-of-hand Department of Justice pulled off to find that the Ferguson Police Department engages in "implicit and explicit racial bias"!

The report insults anybody who's ever studied the statistics - or logic.

The 105-page report concludes: "Ferguson's law enforcement practices are shaped by the City's focus on revenue rather than by public safety needs. This emphasis on revenue has compromised the institutional character of Ferguson's police department, contributing to a pattern of unconstitutional policing, and has also shaped its municipal court, leading to procedures that raise due process concerns and inflict unnecessary harm on members of the Ferguson community. Further, Ferguson's police and municipal court practices both reflect and exacerbate existing racial bias, including racial stereotypes. Ferguson's own data establish clear racial disparities that adversely impact African Americans. The evidence shows that discriminatory intent is part of the reason for these disparities. Over time, Ferguson's police and municipal court practices have sown deep mistrust between parts of the community and the police department, undermining law enforcement legitimacy among African Americans in particular."

The Washington Post immediately put out an article headlined "The 12 key highlights from the DOJ's scathing Ferguson report." Per the Post, the "scathing" statistic first listed is this: Ferguson is 67 percent black, but blacks comprised 85 percent of the traffic stops and 93 percent of the arrests. Incontrovertible proof that the Ferguson PD engages in institutional racism!

Reporters, in describing the Ferguson report, used adjectives that include "shocking," "stunning" and "eye-popping."

But if Ferguson's numbers are "eye-popping," what adjective applies to the New York City Police Department. New York City is 25 percent black. However, of the traffic stops, blacks comprise 55 percent. The statistical "gap" is 30 points. In Ferguson, as stated, the black population is 67 percent, but 85 percent of the traffic stops. The statistical "gap" is 18 points -- far smaller than New York's 30-point "gap."

The answer is that the liberal former New York City Mayor Michael Bloomberg, who governed for 12 years, defends the aggressive policing of the NYPD -- and the resulting "statistical disparities." Bloomberg says: "Unlike many cities, where wealthy areas get special treatment, the NYPD targets its manpower to the areas that suffer the highest crime levels. Ninety percent of all people killed in our city -- and 90 percent of all those who commit the murders and other violent crimes -- are black and Hispanic. It is shameful that so many elected officials and editorial writers have been largely silent on these facts.

"Instead, they have argued that police stops are discriminatory because they do not reflect the city's overall census numbers. By that flawed logic, our police officers would stop women as often as men and senior citizens as often as young people. To do so would be a colossal misdirection of resources and would take the core elements of police work -- targeting high-crime neighborhoods and identifying suspects based on evidence -- out of crime-fighting. ...

"That the proportion of stops generally reflects our crime numbers does not mean ... that the police are engaged in racial profiling; it means they are stopping people in those communities who fit descriptions of suspects or are engaged in suspicious activity."

The National Institute of Justice is the research and evaluation agency of the DOJ. In 2013, the NIJ published its study called "Race, Trust and Police Legitimacy." Unlike when responding to dispatch calls, police officers exercise more discretion when it comes to traffic stops. Thus, the supposedly "racial profiling" cops can have a field day when it comes to traffic stops, right?

But according to the NIJ, 3 out of 4 black drivers admit being stopped by police for a "legitimate reason." Blacks, compared to whites, were on average more likely to commit speeding or other traffic offenses. "Seatbelt usage," said the NIJ, "is chronically lower among black drivers. If a law enforcement agency aggressively enforces seatbelt violations, police will stop more black drivers." The NIJ conclusion? Numerical disparities result from "differences in offending" in addition to "differences in exposure to the police" and "differences in driving patterns."

Richmond, Virginia, is a city of 214,000, with a black population of 50 percent. Eighty-six percent of black Richmond families are headed by a single parent. Of Ferguson's 67 percent black population, how many kids grew up in fatherless homes?

Whatever the answer, isn't this a far more relevant statistic?

All of this may be true, but it is not going to impact the meme. People believe what they want to believe, and they don’t really care what the facts are.

Where is the actual report?!!

There are a lot of people who read the headline in the Washington Compost and believe what it says. They don’t look at the media as a bias institution that works for the leftist rats. Their ignorance is destroying America.

And besides, this author is clearly WAAAAA-cisss!

Two police officers were seriously injured in a shooting early Thursday outside the Ferguson, Mo., police department amid new protests following the resignation of the town’s embattled police chief.

A 32-year-old officer from suburban Webster Groves was shot in the face and a 41-year-old officer from St. Louis County was shot in the shoulder, St. Louis County Police Chief Jon Belmar said. Both were taken to a local hospital, where Belmar said they were conscious. He said he did not have further details about their conditions but described their injuries as “very serious,” but not life-threatening.

Authorities are searching for the gunman. No suspect has been identified.

The protest up to that point was relatively peaceful, but the sound of gunfire just after midnight sent protesters and police officers running for cover. Police dressed in riot gear dragged the injured officers to safety, The New York Times reported.

‘This is what they wanted to happen’

Witnesses told the paper they believed the gunshots came from the top of the hill about 220 yards from the station.

The shooting heightened tension at the protest.

“This is what they wanted to happen,” one Ferguson officer said, according to The Times. Another protester reportedly told the officer the statement was untrue.

Police Chief Thomas Jackson was the sixth employee to resign or be fired after a Justice Department report cleared a white former Ferguson police officer, Darren Wilson, of civil rights charges in the shooting of black 18-year-old Michael Brown in Ferguson last summer. Wilson has since resigned. A separate Justice Department report found a profit-driven court system and widespread racial bias in the city police department.

Police Shot in Ferguson — Video: Protester Taunts Cops Helping Wounded Officers
AP Photo/Jeff Roberson
During a protest early Thursday morning in Ferguson, Missouri, shots were fired and two police officers were seriously injured. A live-stream video being shot from across the street by one of the protesters captured the moment.

11 posted on 03/12/2015 7:27:47 AM PDT by AppyPappy (If you are not part of the solution, there is good money to be made prolonging the problem.)
[ Post Reply | Private Reply | To 1 | View Replies]
To: lentulusgracchus
Two Police Officers Shot in Ferguson NEWSMAX

MSNBC Clown Joe Scarborough Feels Bad For Al Sharpton After Ferguson Police Shootings: “This Has Got To Be Terribly Frustrating For You”…

I have the solution:

In the all black precincts in and around Ferguson, Holder and Obama conduct an election to determine the exact % of traffic stops that can happen and the exact # of 911 calls that can be responded too regarding blacks.

Whatever the “fair” number is in the eyes of blacks only then that’s it. If it’s 10% or 90%, black “citizens” get to set it. When that % is exceeded, cops cease and desist.

Then, same thing with the number of black cops, hell, let em all be black.

In other words, give this “community” of blacks exactly the amount and quality of policing they want. Then let’s the rest of us “FORGET ABOUT IT!!!!!!!!!!!

This is the reason why the Ferguson PD is broken beyond fixing: “Ferguson’s law enforcement practices are shaped by the City’s focus on revenue rather than by public safety needs.” Nobody is denying that; not the police or the city administration or anybody else. I don’t care if your city is 90% black or 90% white. I don’t care what the demographics of the arrests and citations are. If all your police are there for is to ticket the max number of people and collect the max amount of fines then there is no way the citizens will ever trust the police, and no reason why they should. So any money spent on trying to change the force is money wasted.

17 posted on 03/12/2015 7:50:43 AM PDT by DoodleDawg
[ Post Reply | Private Reply | To 1 | View Replies]
To: Kaslin
Bloomberg says: "Unlike many cities, where wealthy areas get special treatment, the NYPD targets its manpower to the areas that suffer the highest crime levels. Ninety percent of all people killed in our city -- and 90 percent of all those who commit the murders and other violent crimes -- are black and Hispanic.

Me... I'm tired of paying taxes so police officers can babysit black thugs and their 'families'...

Police should be assigned based on 'eight city block' areas. If more 'policing' is required, the people in that 8 city block area will have a surcharge added to their cell phone bill, cable bill, or subtracted from their 'disability' checks.

I'm sick of paying extra taxes so police can babysit the ingrates.

It’s gonna be a long hot summer in Ferguson. Again.