Doug Ross at Director Blue has done the math of the costs of Jeb Bush’s Acts of Love and the convict side alone is pretty expensive.

A little research led me to a fairly startling number. In 2012 alone, it was estimated that 350,000 illegal aliens are imprisoned in the United States, having been convicted of major crimes.

I repeat: 350,000 illegal aliens are residing in our prisons.

And how much does each illegal cost the taxpayer? The New York Times states that “the annual average taxpayer cost in these states was $31,286 per inmate.”

The total cost to the American taxpayer? $11 billion.

Those numbers can range around $42,000 p/courtroom hour. So we’ve got at least another $11 billion right there. Probably much more. And much of it borne by local municipalities.

Finally this means that illegal aliens make up 350,000 of the country’s 2.3 million inmates. Or 1 in 7 prisoners is an illegal alien.

And it means that the average incarceration rate for illegal aliens is much higher than the national 743 per 100,000 rate. Instead it would be more like 1 out of 33. 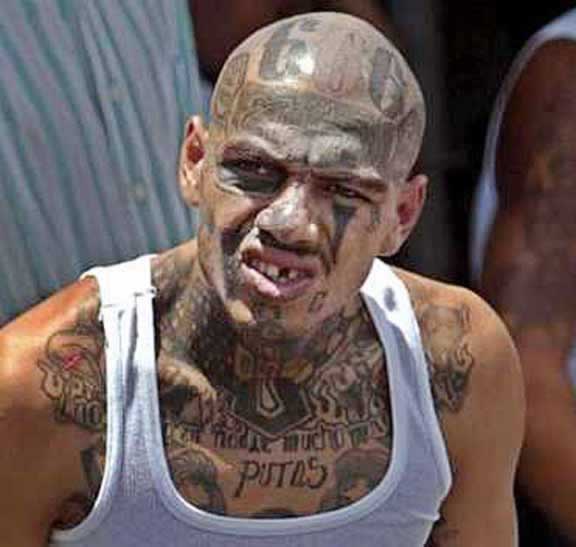 Photo is terrifying…how can anyone choose to be so ugly and evil?

And we’re supplying “3 hots and a cot” to these creeps? This one should be sent back to his country of origin, probably Hell.

Sub human garbage that needs to be disposed of.

Lets assume that, if the they are the model citizens who are contributing to our society in a positive fashion as our politicians wish to lead us to believe such that the illegal alien population commits crime at roughly the same proportions as the American population as a whole , then 1 in 7 or more of the people residing within the borders of the United States are illegal aliens.

Assuming that the current us population is 320 million that means we have 46 MILLION illegal aliens in the country.

Providing amnesty to a demographic tsunami of just under 50 million illegal aliens would have devastating consequences on the country economically, politically and culturally

Don’t worry, unkle barak and eric will take care of them.

Just as long as they vote for the Rats.

“Sub human garbage that needs to be disposed of.”

aka a potential Democrat voter that needs to be registered.

Send them back in a drone by way of a loop over the Pacific or Atlantic. Oops? Hey Mack did you calculate that Fuel correctly?

This doesn’t even factor in the property damage inflicted on the citizenry; although I suppose it is arguable that one man’s broken window is some window company’s gain—so that’s a wash.

Incalculable is the societal damage that is created by the steady, relentless attrition in the overall respect for laws and the general glorification of criminality. In essence, the US is becoming a street gang; where the ordinary (not any more) ethical operation of society and its economy is replaced by smash-and-grab, as non-criminal aspiration is replaced by the aspiration for the protection of the junta in charge.

Barry Half-White WANTS America to devolve into TRIBES...
Thats the policy of the White Hut.. and it’s Chief Witch-doctor..

Pretty smart actually.. control each tribe and you control America..
It seems to working....

As the republican elite bleat out nonsensical bleats..
Republicans deserve it.. they ALLOWED the primitives to DUMB DOWN AMERICA.. in federal public schools..

ONE CURE.... and it will be bloody count on it..
The progressives will release power ONLY from their cold dead hands..

Also add in that one illegal alien that has cost America a few trillion and is not yet a prisoner.

The percentage would be higher if ICE hadn’t released 36,000.