During her campaign for president in 2008, then-Sen. Hillary Rodham Clinton was involved in a profanity-laced argument with one of her Secret Service agents, according to Glenn Thrush a reporter for THE POLITICO.

Thrush witnessed Clinton being cursed at by an agent in an argument over her demand to fly the campaign plane, a Boeing 737, into a roiling Wisconsin blizzard.

“I remember watching a usually stoic Secret Service agent cursing Clinton on the tarmac in Milwaukee when she ordered the campaign’s rattletrap 737 to fly up into a blizzard, knowing we’d have to turn back, just so she could say she’d attempted to fly to a rally in Madison.

The gesture was meaningless. She lost Wisconsin by 17 points a few days later.”

It is unknown why this event was not reported at the time.

However, it is now known that for purely political appearances, Clinton, campaigning to be the Commander-in-Chief of the United States Armed Forces, wanted to lead her campaign jet, packed with the souls of numerous press, campaign staff, and federal agents, into unsafe flying conditions

TOPICS: Extended News; Government; News/Current Events
KEYWORDS: 2008; hillary; hillary2016; hillaryabusive; hillaryquotes; reckless Navigation: use the links below to view more comments.
first 1-20, 21-34 next last
Human life has no value to Hillary, except her own of course. Whether it is a developing fetus being sucked out via vacuum or campaign, security staff ordered into unsafe flying conditions, human life is nothing if not dispensable if it gets in the way of her political ambitions or threatens her personal status. And then you've got people like Vince Foster and the alleged untold number of victims of the Little Rock Mafia who were dealt simply on the basis in which they threatened the political status of Bill and Hillary.

What value is there in human life if not to serve her political ambitions, personal goals and to die if need be in facilitation of those objectives?

She was behind in the polls in Wisconsin and was desperate to narrow the polls, storm or no storm and thought nothing of the personal responsibility of sacrificing everyone on board to that end.

Just look at the careless disregard, apathy she's demonstrated for those who died atBenghazi. That is the sort of detached, apathetic national leader you can expect with her as MIC, Medusa-in-Chief.

Oh my, a real mystery indeed.

Uh, if there was a profanity laced argument I’m 99.999% sure that Hillary would’ve given better than she got. Ask her SS detail when she was FLATUS.

Oops, my bad. That would be FLOTUS, not FLATUS.

But at this point, what difference does it make?

But in its place, emerged a new profession.

With every passing day I’m getting more convinced that this is how God’s wrath is being played out on us here in America. We’ve been cursed to be governed by depraved, diabolical lunatics.

When Hillary finally does something stupid, the campaign will claim brain damage from her accident. The media will cheer her courage.

Turning points in history. A flight auguring in over the snow covered landscape on a remote patch of Wisconsin farmland. Benghazi would have never happened. Slick Willie would have taken up the cause, and running in her place, would have defeated the Boy Wonder in a landslide of sympathy votes, but “only the good die young.”

Is this willful ignorance, denial, stupidity, or sarcasm? 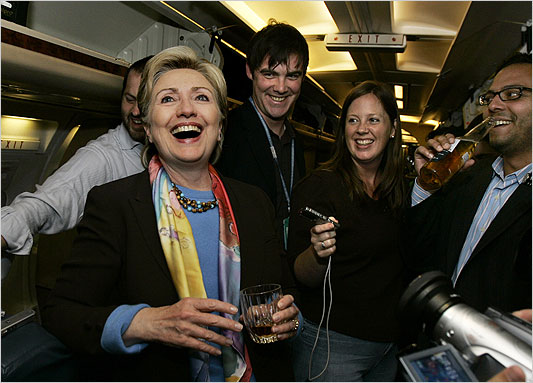 Me a bitch, oh come on now.

The woman doesn’t have the skills to manage a 7-11 (much like our current C-in-C) much less to be chief executive.

You are so right. I will remember you said that when it happens.

She wanted to brag about another (fake) corkscrew landing.

I like FLATUS but maybe FLATULUS WOULD BE BETTER.

Hillary screaming at the Secret Service? Just like old times back when Bill was in the White House. Maybe we can revisit some of those stories too.