As we celebrate the resurrection of our Lord this weekend, I thought I’d pause for a moment and examine how we give honor (ahem) to Mother Earth. After all, in the eyes of some people, Earth Day (April 22) supersedes Easter (April 20) in importance, significance and even worship.

I mean no disrespect, of course. But many readers are already familiar with our Christian faith. What they may be less familiar is how we (cough) honor Gaia.

You see, green living has come to be associated with Gaia worship. To the annoyance of the enviro-nuts, my family lives a remarkably green lifestyle – but we most assuredly don’t promote a green agenda (much less worship Gaia). Somehow it’s become unacceptable to live green without having a suitably militant green attitude.

TOPICS: Culture/Society; Philosophy
KEYWORDS: earthday; easter; faithful
Thanks Patrice. A LOT of us get it. The hippocritters talk a good talk but just how many of them are really committed? If they are "really" committed, they'd live in a hand built yurt with no elec or a mud hut with no elec. They should cast off all their electronic media and wear shoes made of bark and moss etc. How many are THAT committed? Not that many. They'd rather drive to some sort of protest wearing their patagonia or columbia gear and tell you that you're the bad guy. As for me? I'm gonna be powering up a LOT of stuff on Tuesday to honor gaia for all the resources she provides us. Sunday? Resurection will be celebrated. Bless you guys for being good stewards of the earth.
1 posted on 04/19/2014 5:32:05 AM PDT by rktman
[ Post Reply | Private Reply | View Replies]
To: rktman

People usually regret inviting me to participate in “Earth Day”.

Sorry, we do not acknowledge the thinly disguised “Lenin’s Birthday” that passes as “Earth Day”.

I love Earth Day.....I turn on all the lights in my house, take out the SUV and race through the highways, I crank up the oil heat AND run the central air (let them fight it out), smoke a cigar, eat a big barbecue, and finally...cut down some trees in the backyard. 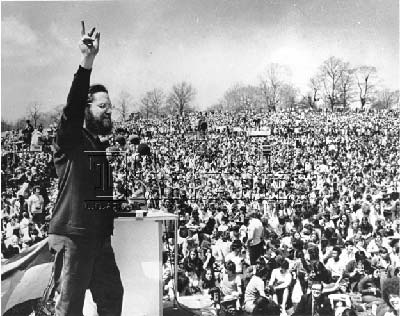 This is Ira Einhorn,the Founding Father (or is that "Founding Parent #1"?) of "Earth Day".In 1977 he murdered his former girlfriend for having had the temerity to leave him.Her disappearance was solved when his neighbors started reporting a foul odor to their landlord and/or police.The police found her body stuffed in a foot locker in his apartment

Green is the new Red, and it’s no mistake that earth day is held on Lenin’s birthday. The entire green movement is a naked power grab and nothing else.

LOL! Heck, I don’t even get invited. So what’s the deal? Do you bring up ira einhorn and his “re-cycling” of his girlfriend? He may not have been THE guy that “invented” erf day but he claimed he did. Notice the name of his lawyer. Sound familiar?

Einhorn had a five-year relationship with Holly Maddux, a graduate of Bryn Mawr College who was originally from Tyler, Texas. In 1977, Maddux broke up with Einhorn, which infuriated him. She went to New York City and became involved with Saul Lapidus, a rejection that Einhorn would not accept. After learning about this turn of events, Einhorn called Maddux and lured her back to Philadelphia under the guise of retrieving her belongings. She was never seen alive again.

When questioned, Einhorn told police that Maddux had left to go to the store but never came back. The alibi came under scrutiny when Einhorn’s neighbors began complaining about a foul smell coming from his apartment, which in turn aroused the suspicion of authorities. Eighteen months later on March 28, 1979, Maddux’s decomposing corpse was found by police in a trunk stored in a closet in Einhorn’s apartment. After finding Maddux the police reportedly said to Einhorn, “It looks like we found Holly,” to which Einhorn reportedly replied, “You found what you found.” Einhorn’s bail was reduced to $40,000 at the request of his attorney Arlen Specter; Einhorn was released from custody in advance of his trial by paying 10% of the bond’s value, or $4,000. This amount was paid by Barbara Bronfman, a Montreal socialite, and one of many people Einhorn had convinced to support him financially.

See my reply to G Larry about the ever affable ira.

If the environmentalists are really that committed to living in harmony with the Earth, they'll live like the natives in the Amazon River basin. And they'll be lucky to live to age of 35....

If they were genuinely committed to their cause they would hold annual suicide rallies to celebrate their oneness with Mother Earth.

To paraphrase the Emperor Mind, perhaps we should call “Earth Day”, “Inferior Earthling Day”. That would adequately describe its celebrants.

The left is always trying to usurp days that are special to those they do not agree with, I’d guess that almost any christian holiday has a leftist celebration within a few days, even 9-11 was proclaimed as some type of socialist service to everyone but you day.

Wait until 2017 when Congress and Hillary create the next national holiday, August 4th: