Unconfirmed news reports claim the Russian Navy is deploying land-based ‘Bastion’ anti-ship missile systems as a response to the recent U.S. move entering two naval vessels to the Black Sea. The two American Arleigh Burke class destroyer USS Truxtun (DDG-103) crossed the Bosphorus Strait Friday, headed into the Black Sea, as tensions simmer over Ukraine’s Crimea region. The Russians also moved two naval combatants from the Mediterranean Task Force back to the Black Sea Fleet. Tension is mounting in the Crimea Peninsula with the preparations for a referendum on independence from Ukraine later this week.

As of today, the Truxtun remain the only US warship in the Black Sea following the southbound passage of FF(G)-50 USS Taylor through the Bosphorus. The Taylor, a Perry class frigate was deployed to the Black Sea before the 2014 Sochi Olympic Games started. USS Taylor and the flag ship of the US 6th Fleet USS Mount Whitney were sent to the Black Sea to help with the evacuation of US athletes and spectators in case of an terror attack to the Games. However, when visiting the Black Sea port of Samsun, Turkey, the frigate damaged her propelled and had to be towed away to Souda, Crete for repairs.

The US Navy said in a statement on Thursday that the ship was bound for the Black Sea to conduct military exercises with Bulgarian and Romanian naval forces. According to the Montreux Convention, warships of countries which do not border the Black Sea can only stay in the waters for 21 days.

The Bastion anti-ship missile system was deployed last night (8-9 March) to Sevastopol from the Russian town of Anapa, Krasnodar, about 250 miles to the East. Follow bystanders recorded the movement of Bastion anti-ship launcher complex on the streets Crimea. The K-300P Bastion-P employs P-800 Yakhont (SS-N-26) anti-ship cruise missile hypersonic anti-ship missiles carried on mobile transporter-erector-launchers (TEL) is a Russian. The missiles are used as mobile coastal defence systems, having an effective range of 300 km. 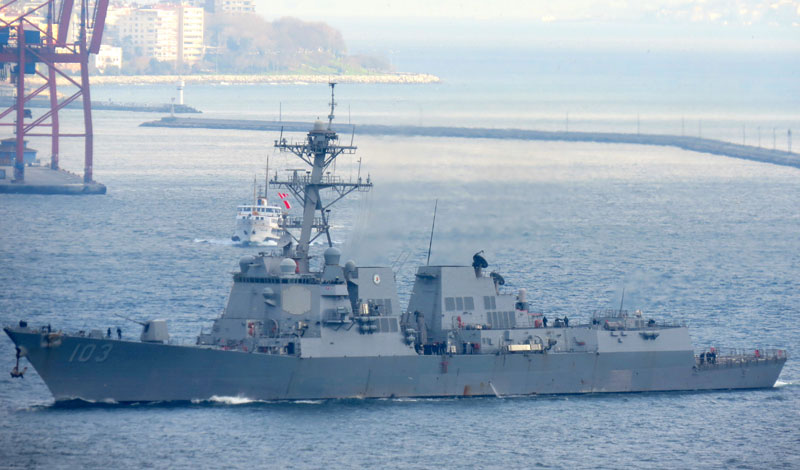 That’s the least I’d do if I ran Russia. At least Mr. Putin will defend his country’s interests. Our Dear Leader can’t be bothered. He has lobster to gobble, “golf” to play and fundraising to do.

Just Russians being Russian, thats all. Best to be prepared—one small ship is no match for the whole Russian black sea fleet. But the missles might have other targets as well—if fighting should break out between Ukraine and Russia.

“According to the Montreux Convention, warships of countries which do not border the Black Sea can only stay in the waters for 21 days.”

US Truxtun has 19 days to go in the Black Sea.

am I just being retarded, or is this just totally for show on both sides, with not a chance of hostilities?
reminds me of government shutdown fights when the dems try to scare seniors by saying their ss checks will not go out, when we know there’s not a chance in hell they won’t.

So can it be replaced with a different ship after three weeks?

We don’t even have a blue water navy.

Obama has hollowed out the US military to the point it can’t even put up a real show of force.

Anyway, Obama and his officials don’t believe in horses, muskets, sabers and cannons and all that 19th Century “hard power” stuff.

We’re having a showdown with the Bear and we’re holding the short end of the stick.

Any one who says with a straight face that Ukraine should ally itself with the West are fools. And Russia will demonstrate the West can’t be relied on in a crunch and will show Ukraine’s neophyte rulers they’re helpless without Russian protection.

Sometimes, when you play with matches, things catch on fire. You don't necessarily mean for it to happen, but it happens.

All this sabre rattling is purely for show... until an Archduke gets shot.

““According to the Montreux Convention, warships of countries which do not border the Black Sea can only stay in the waters for 21 days.””

Is the USS Truxtun a warship according to “Montreux Convention Regarding the Regime of the Straits”?
http://en.wikipedia.org/wiki/Montreux_Convention_Regarding_the_Regime_of_the_Straits

The USS Truxtun could be a naval auxiliary vessels according to the convention because missiles are not mentioned ;-)

Naval auxiliary vessels specifically designed for the carriage of fuel, liquid or non-liquid, shall not be subject to the provisions of Article 13 regarding notification, nor shall they be counted for the purpose of calculating the tonnage which is subject to limitation under Articles 14 and 18, on condition that they shall pass through the Straits singly. They shall, however, continue to be on the same footing as vessels of war for the purpose of the remaining provisions governing transit.

The thought did cross my mind that bozo and ratputin may be playing games. They’re both narzizists and bored.

Just move it out of the area for a day then come back for another session of 21 days. Neither lunatic adheres to laws.

A toy boat bobbling in the Russian bathtub. What happens should Moscow decide to pull the plug?

If the US wants to throw their mony through the window, I would not dream stopping them.

This kind of useless gesticulation is counterproductive.

If Russia sent military vessels to the Golf of Mexico, the US would holler so loud that the little green Martians could hear them on their planet.

If Russia sent military vessels to the Golf of Mexico, the US would holler so loud that the little green Martians could hear them on their planet...........

No we won’t. Mark this, Argentina, Cuba, Venezuela and Nicaragua will have Russian ships in the next 2 years. With China helping persuade us that it’s for world stability.

Most of the “deep state” establishment types — career diplomats, career analysts, military and business leaders — are telegraphing just that.

The people pushing the the idea that this is huge, huge crisis and that we need to get more involved are politicians, ethnic lobbies and ideologically driven people.

Make of that what you will.

The ship and vessels russia sank will clog the drain.