The Senate Conservatives Fund says that it is time for House Speaker John Boehner to go and they will keep track of the GOP lawmakers that support their effort to oust him from his leadership post. The group, which is targeting several incumbent Republicans in primary races this year, said Mr. Boehner, Ohio Republican, has sold out small government principles on too many occasions and the last straw came this week when....con't here

THIS IS THE LAST STRAW! IT'S TIME FOR OPEN REVOLT!

Better yet...support FReeper Eric Gurr in his primary vs Boehner

Just removing Boehner from Speaker is not enough...voting him out of Congress keeps all the leadership in line 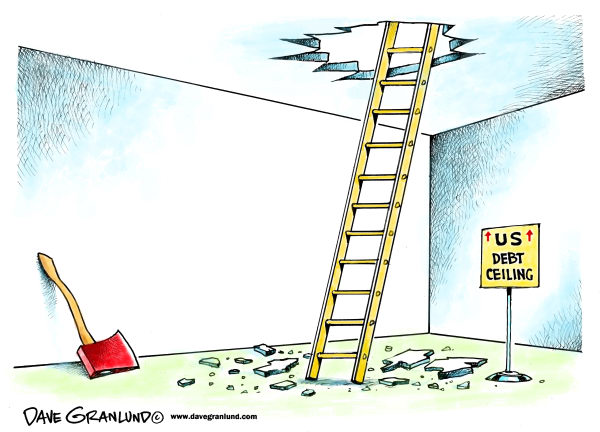 Also, press your Representative to NOT support Boehner for Speaker.

Also, press your Representative to NOT support Cantor for Speaker.

And yes, voting Boehner out of office will send a direct message to the leadership in the House.

7 posted on 02/11/2014 11:37:11 AM PST by Hostage (ARTICLE V)
[ Post Reply | Private Reply | To 4 | View Replies]
To: SeminoleCounty
Mr. Boehner said Tuesday that he is preparing to move forward on the first no-strings-attached debt increase of his tenure as speaker.

The announcement came after Mr. Boehner and his leadership team tried — and failed — to get rank-and-file Republicans to sign off a deal that would increase the nation debt limit and restore future cuts in the cost-of-living adjustments on military retirement pay that were included in the December budget deal.

Boehner MUST go, along with Turncoat Republicans falling into line with him.

Whenever the rare opportunity to reduce the size of the Spendaholic Federal Government approaches a decision point, the unchallenged and therefore invincible Obamanation Congressional Format, ( OCF ), unfolds flawlessly as follows:

* Permissive, weak and cowardly Speaker “Doormat” Boehner proclaims that THIS time he will protect and defend the US Constitution;
* “Assistant Doormat” Cantor will nod like the bobble head lap dog that he is;
* Cave-In, Con-Artist Ryan will make a side deal with his Pelosi Pals;
* “Rubberstamp” Reid will then approve whatever the Pelosi Pals have shamed Ryan into ramming through the House;
* Lazy, Anti-Work Obama will say “The OCF worked again! That was sooooo EASY!”
* The Left Stream Media will gently boo Boehner, while mildly applauding his “Bipartisan” Leadership;
* “Doormat” Boehner will then slink off sobbing, relieved that he dodged another major tongue-lashing from the Left Stream Media;
* Karl Rove will go on FOX and say “The Moderate House Republicans are showing that they are willing to work with Obama;”
* Krauthammer will go on FOX and say “Unbelievable;”
* The Conservative voters will say:
*** “Yup, permissive RINOs are no match for the Commies, Socialists and Democrats in Congress.
*** We are doomed to feel sorry for ourselves, again.
*** What shall we do?
*** Sigh - - - - .”

BTW, Boehner, Cantor and Ryan are all heavily favored to win re-election to their well-worn House seats in 2014 - - - - .

The voters in Boehner’s Ohio House District vote Boehner into the US House, and the US House Members vote to choose THEIR Speaker.

The voters in Ohio are simply overjoyed that the US House RINO Members have loyally continued to keep in place a weak, cowardly, permissive, doormat Speaker who has ALWAYS caved in to Obama.

Boehner’s Speakership is safe, as our House RINOs just love to Cave In to Commies, Socialists, Democrats, and especially to Obama.

Oops, I feel a “Boehner” coming on! Please pass the Kleenex! Sob!

No, No! The Charmin is for an Obama!

Oh, I think that’s an overreaction. We don’t need to take his head, just sever it from his body. If he likes his head, he can keep it. Period.

Remove Boehner and his entire “leadership” team now before the 2014 election for two reasons: he (they are) is attempting to forever end any Republican Party leadership by ramming through Amnesty (under any guise rather than enforcing existing law) against the will of the American people and the express desire of registered GOP members; and he (thy) will also support raising the debt not only without any strings, i.e. Keystone Pipeline, restoring cuts to the military.

This guy is an all out disaster for the conservatives, the party, and the country. Yeah, you can lump him in there with Obama. Check the Whip List for your Rep. Do they support replacing Bonehead? Call and school or thank them! Phone numbers provided at link.

If they’re serious, build the darned guillotine and I’ll pull the handle for free.

I have been in this campaign since late September. I have not been as angry about John Boehner as I am today. This is insanity. Does he no longer believe that the money he racks up in clean debt increases belongs to us?
If he can’t do it he needs to get out of the way.
This is an absolute travesty. Madison, Washington, Hamilton, Franklin are collectively spinning in their graves.

18 posted on 02/11/2014 11:58:05 AM PST by Jane Long (While Marxists continue the fundamental transformation of the USA, progressive RINOs assist!)
[ Post Reply | Private Reply | To 16 | View Replies]
To: SeminoleCounty; EricGurr; All
did you know Eric Gurr (OH-TEA) is
Boehmer's opponent is a freeper..

We even have “Doormat” Boehner in place as the whiney, wimpy, Whimper-Speaker!

FORWARD!, into the abyss of Obamanation!