As the news stories mount regarding Syrian President Bashar al Assad’s decision to move his chemical weapons stockpile from storage to areas closer to rebel locations, there is one thing the mainstream media is not commenting on: How Syria acquired what is reported to be one of the world’s largest arsenals of bio-chemical WMD? More to the point, what they are not reporting is this: From where did the Assad regime acquire their bio-chemical WMD?

In 2006, former Iraqi general, Georges Sada, who served under Saddam Hussein before he defected, wrote a comprehensive book detailing how the Iraqi Revolutionary Guard moved weapons of mass destruction into Syria, before the US-led action to eliminate Saddam Hussein’s WMD threat, by loading the weapons into civilian aircraft in which the passenger seats were removed.

As reported in the New York Sun on January 26, 2006: “‘There are weapons of mass destruction gone out from Iraq to Syria, and they must be found and returned to safe hands,’ Mr. Sada said. ‘I am confident they were taken over.’”

“Democrats have made the absence of stockpiles of weapons of mass destruction in Iraq a theme in their criticism of the Bush administration’s decision to go to war in 2003...

“The discovery of the weapons in Syria could alter the American political debate on the Iraq war. And even the accusations that they are there could step up international pressure on the government in Damascus.

That government, led by Bashar Assad, is already facing a UN investigation over its alleged role in the assassination of a former prime minister of Lebanon.

TOPICS: Foreign Affairs; News/Current Events; War on Terror
KEYWORDS: chemicalweapons; georgessada; littlebrotherdidit; maheralassad; sada; saddam; saddamhussein; syria Navigation: use the links below to view more comments.
first 1-20, 21-40, 41-60, 61-66 next last
This article is over a year old but has suddenly become relevant in light of recent news. 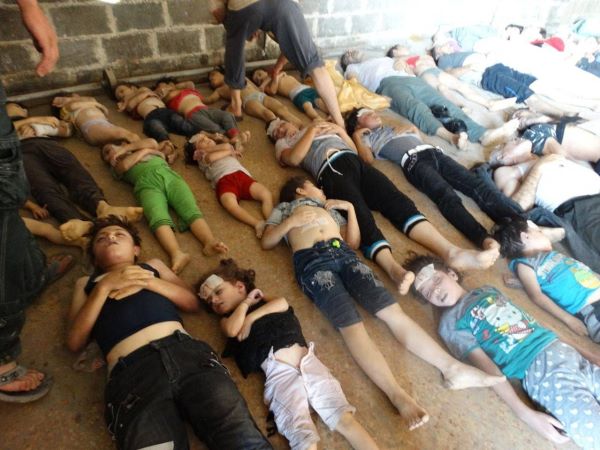 This is probably true, but isn’t this the same bunch who lied about the WMDs being buried somewhere?

I had this figured out from the very beginning.

Christianity values human life. Many others, both here and abroad, treat it as refuse.

How do we know Assad even set these weapons off? The Kenyan has been hellbent since day one helping his mooslim pedophile demons take over the entire middle east so it could have been anyone.

RE: I had this figured out from the very beginning.

I don’t hear the name SADDAM HUSSEIN being mentioned anywhere in the mainstream press...

Pay no attention to those satellite photos of convoys leaving Iraq WMD sites. They are just Bush lies....it never happened....have another soma....

Interesting article from the US NAVAL INSTITUTE:

Of course, very few of today’s reporters will give this the time of day.

RE: Pay no attention to those satellite photos of convoys leaving Iraq WMD sites. They are just Bush lies....it never happened....have another soma....

Interesting article from the US NAVAL INSTITUTE:

Of course, very few of today’s reporters will give this the time of day.

Most FReepers did, too.

This verse came to mind.
“The burden against Damascus. ‘Behold, Damascus will cease from being a city, and it will be a ruinous heap. The cities of Aroer are forsaken; they will be for flocks which lie down, and no one will make them afraid. The fortress also will cease from Ephraim, the kingdom from Damascus, and the remnant of Syria; they will be as the glory of the children of Israel,’ Says the Lord of hosts” (Isaiah 17:1-3).

The "rebels" weren't making headway and needed the UN & Obama to come to their aid and topple another government.

And they claimed Bush was a cowboy!

True. Christianity is a personal relationship with the Creator God Jesus Christ. Islam is a murdering thug religion based on accept our ways or die.

The trouble with telling lies is the truth always shows up sooner or later.

An article from 8 years ago:

The assertion comes as President Bush said yesterday that much of the intelligence on Iraq’s weapons of mass destruction was incorrect.

The Israeli officer, Lieutenant General Moshe Yaalon, asserted that Saddam spirited his chemical weapons out of the country on the eve of the war. “He transferred the chemical agents from Iraq to Syria,” General Yaalon told The New York Sun over dinner in New York on Tuesday night. “No one went to Syria to find it.”

From July 2002 to June 2005, when he retired, General Yaalon was chief of staff of the Israel Defense Force, the top job in the Israeli military, analogous to the chairman of the Joint Chiefs of Staff in the American military. He is now a military fellow at the Washington Institute for Near East Policy. He made similar, but more speculative, remarks in April 2004 that attracted little notice in America; at that time he was quoted as saying of the Iraqi weapons, “Perhaps they transferred them to another country, such as Syria.”